The Luster & Luxury of Londolozi

Londolozi Private Game Reserve is unrivalled in terms of it’s cultural heritage, luxurious atmosphere and incredible saturation of wildlife. It is arguably the best place for viewing game in the whole of the Sabi Sand Game Reserve, hence why so many of our guests wish to experience it. We, at Safari Architects, have been extremely fortunate to spend many days over a long period exploring all of the splendour Londolozi has to offer. The Lloyd and Gale families were our most recent guests to visit this beautiful area, and were about to see what made this place so special.  The next four nights were to be spent at Founder’s Camp, one of Londolozi’s finest free-standing, luxury chalets.

We departed Johannesburg in true style, boarding a private Pilatus PC-12 NG aircraft to take us to Londolozi in the heart of the Sabi Sand Reserve. As if the flight itself was not exciting enough, on arrival we were welcomed by a beautiful journey of giraffes right in front of the airstrip! After disembarking, we spent some time admiring these bizarre beauties before heading onto Founder’s Camp to settle in and prepare for the afternoon game drive! We were certainly off to a wonderful start… 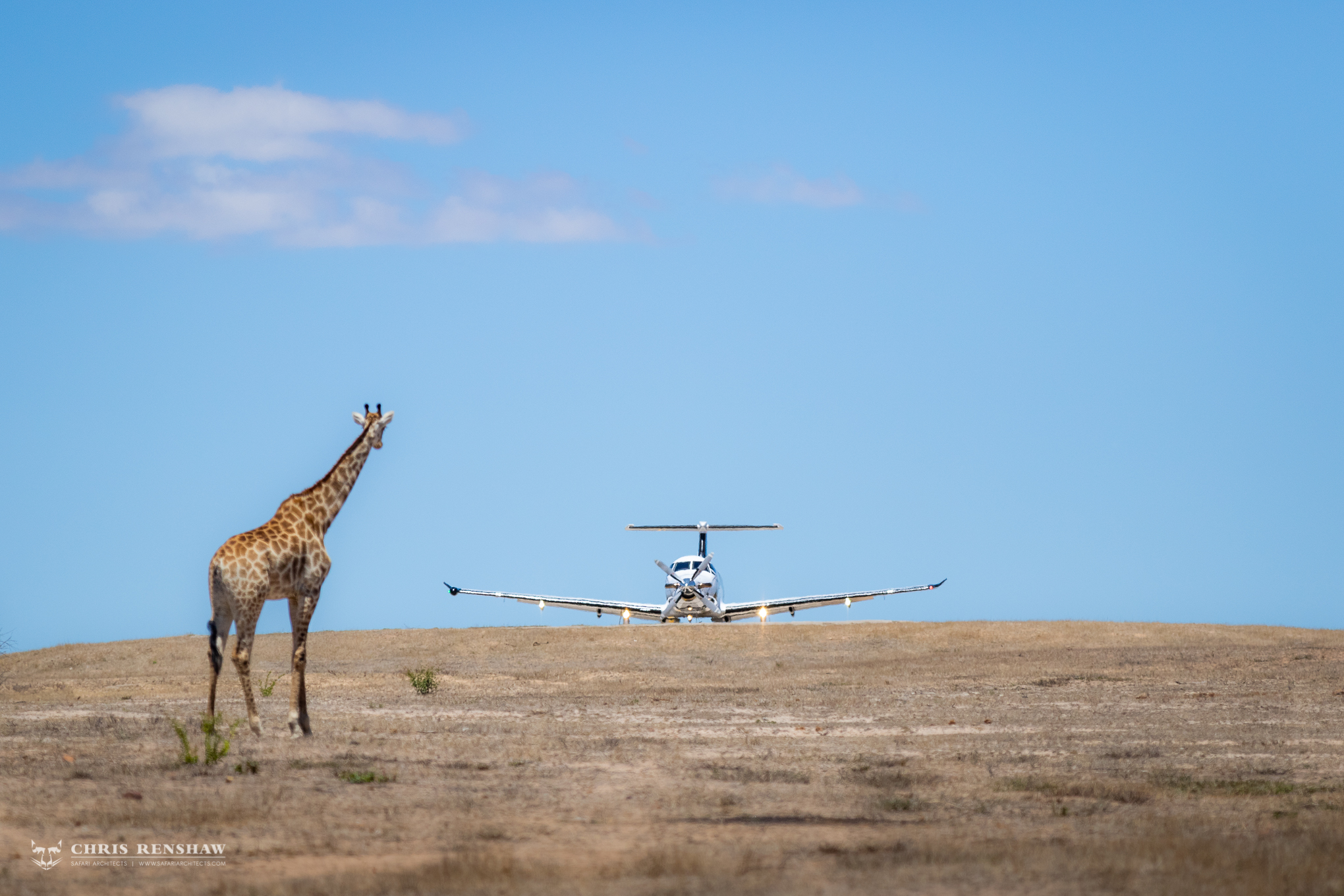 Alison and David were in fact returning to Africa after multiple previous visits. It is always a thrill to see guests reconnect with Africa again whilst creating brand new memories. However, nothing is quite as rewarding as sharing the wonders of Africa with guests for the first time! This being said, Kevin and Kim were in for a real treat over the next 5 days. The photographs and recount below will illustrate their journey… 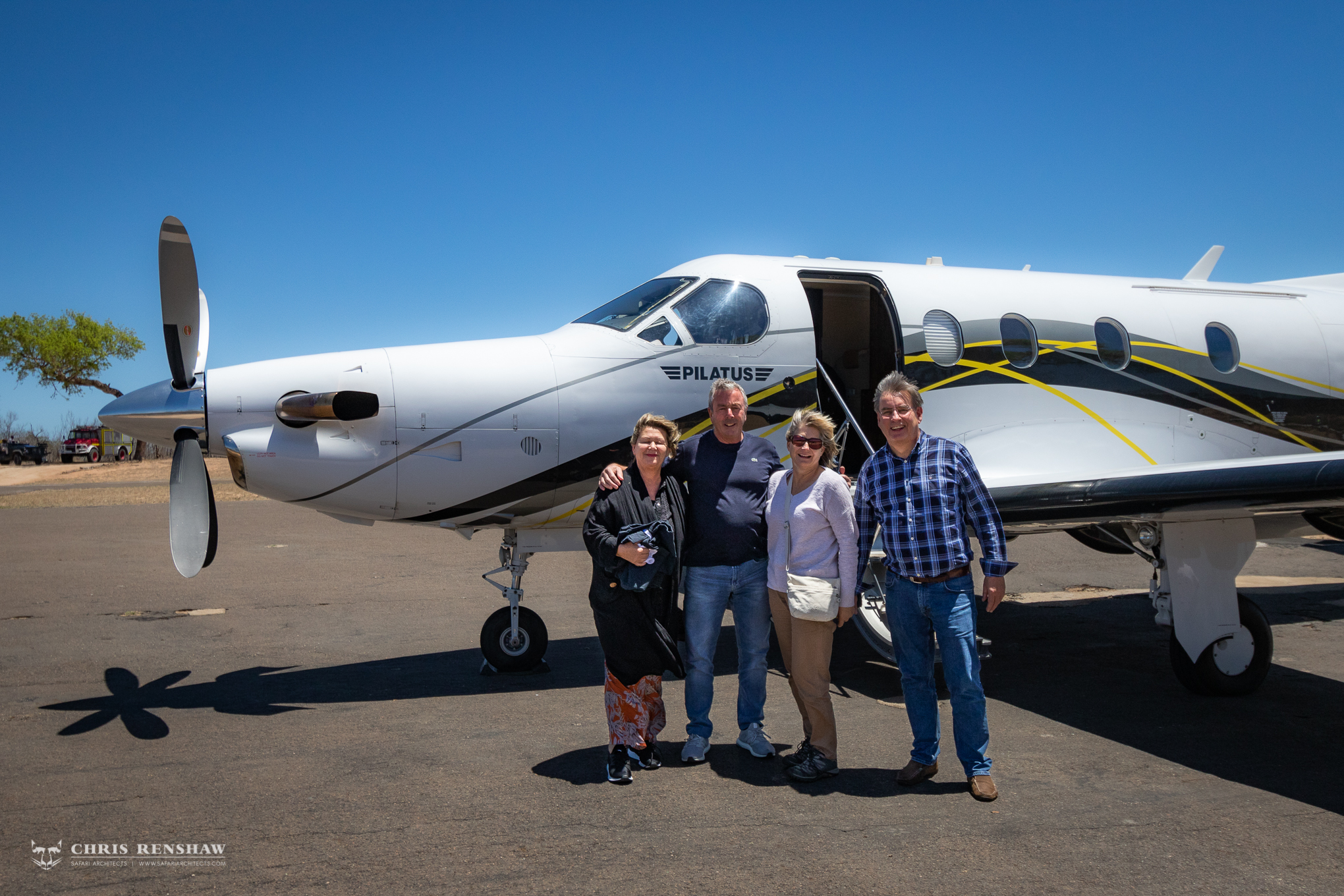 Arriving in our Pilatus PC12-NG aircraft, with a nearby journey of Giraffe to welcome us! 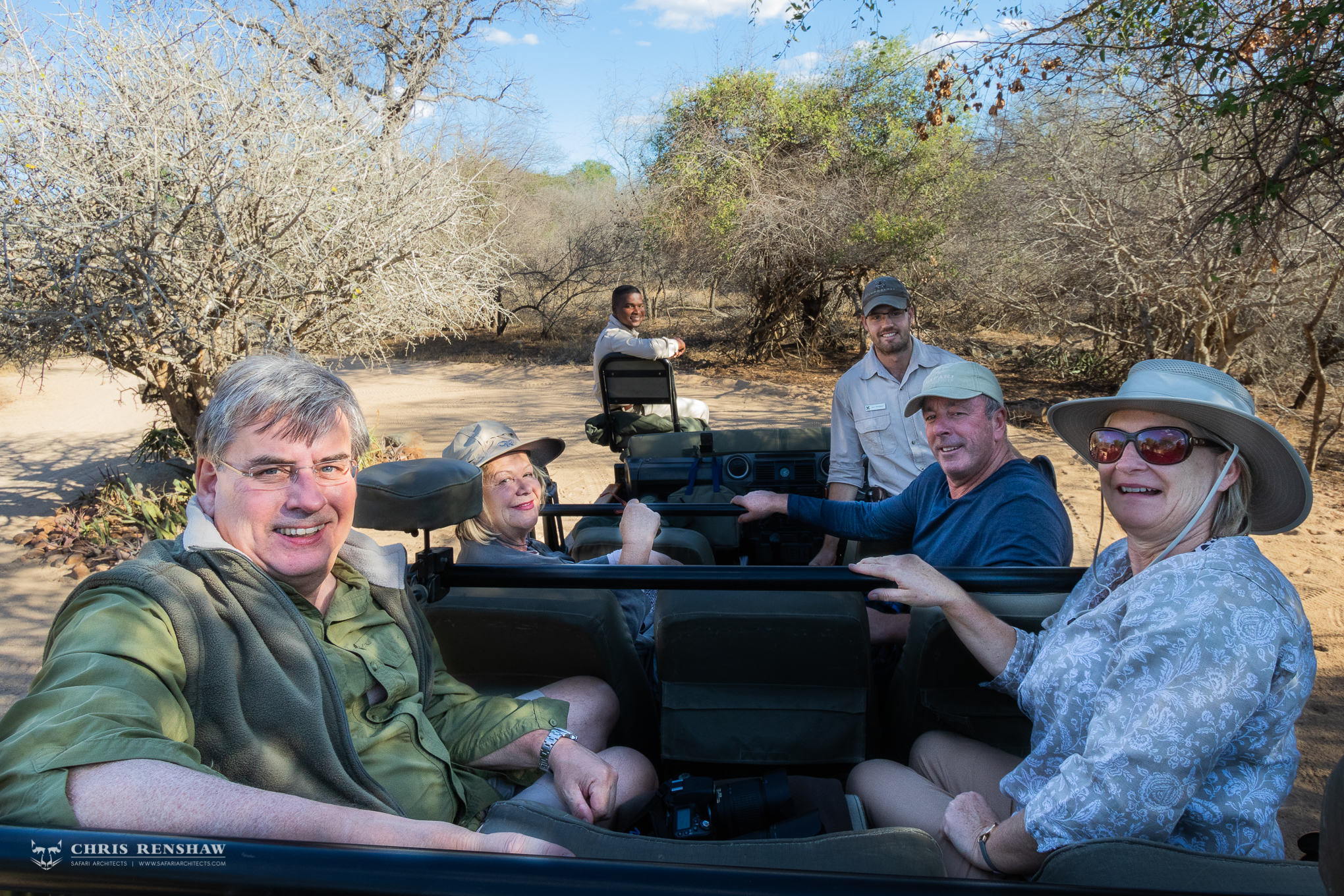 Ready to Rock ‘n Roll on our first game drive. Sean (guide) and Joy (tracker) were to be our Londolozi experts.

The landscape was dry and in desperate need of rain. However, although this does not sounds ideal, this naturally dry period allowed for some magnificent game viewing opportunities and amazing animal interactions! Reason being that many animals were forced to stay in the few areas where there was water, and herbivores had to stay in areas that still had sufficient green grazing. This meant that we were more likely to find many animals in fewer places. This also meant that the predators were out and about on the prowl. All in all, we were not disappointed by the dryness! 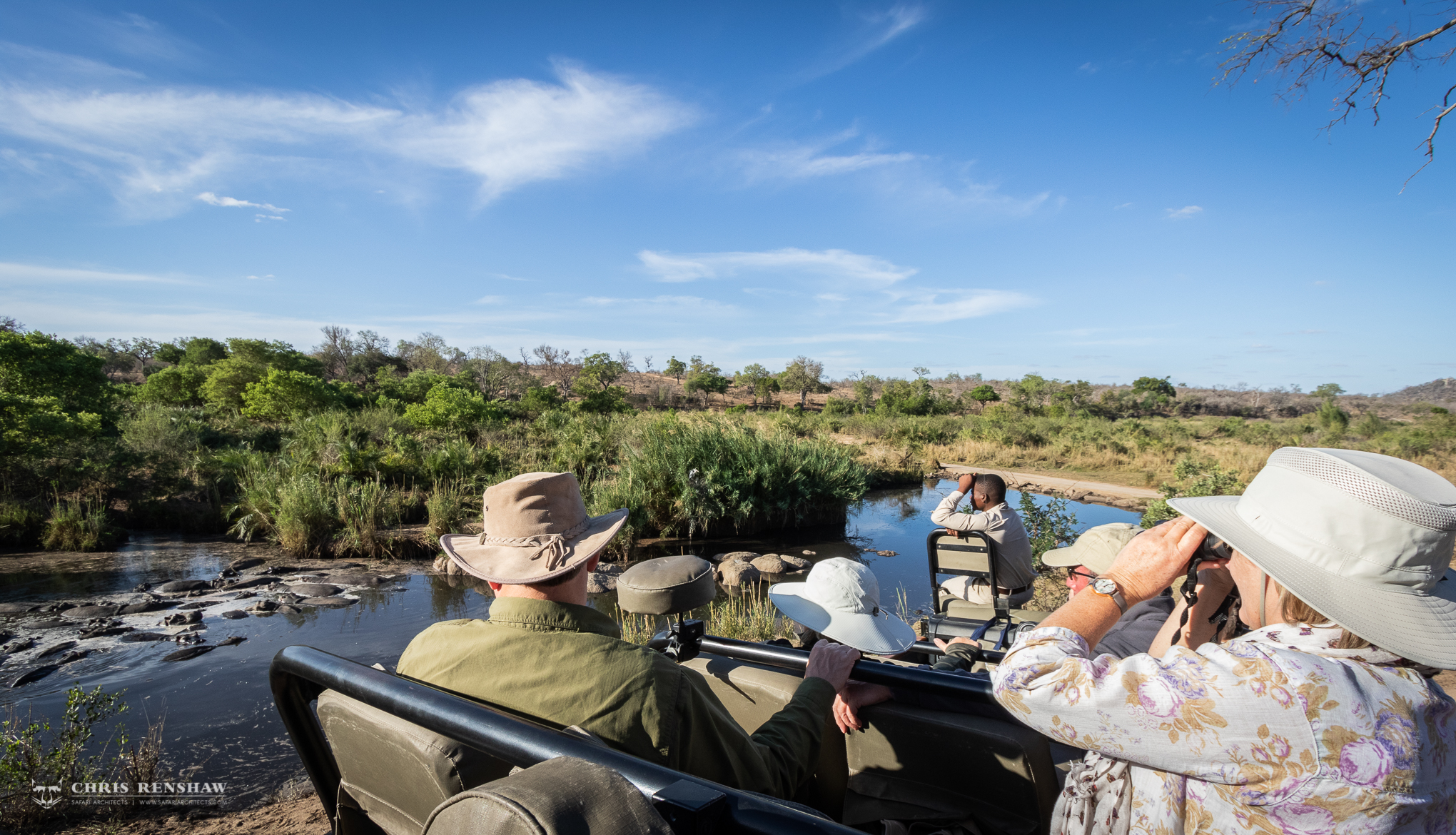 Some hippos huddle up in one of the last remaining pools in the Sand River. 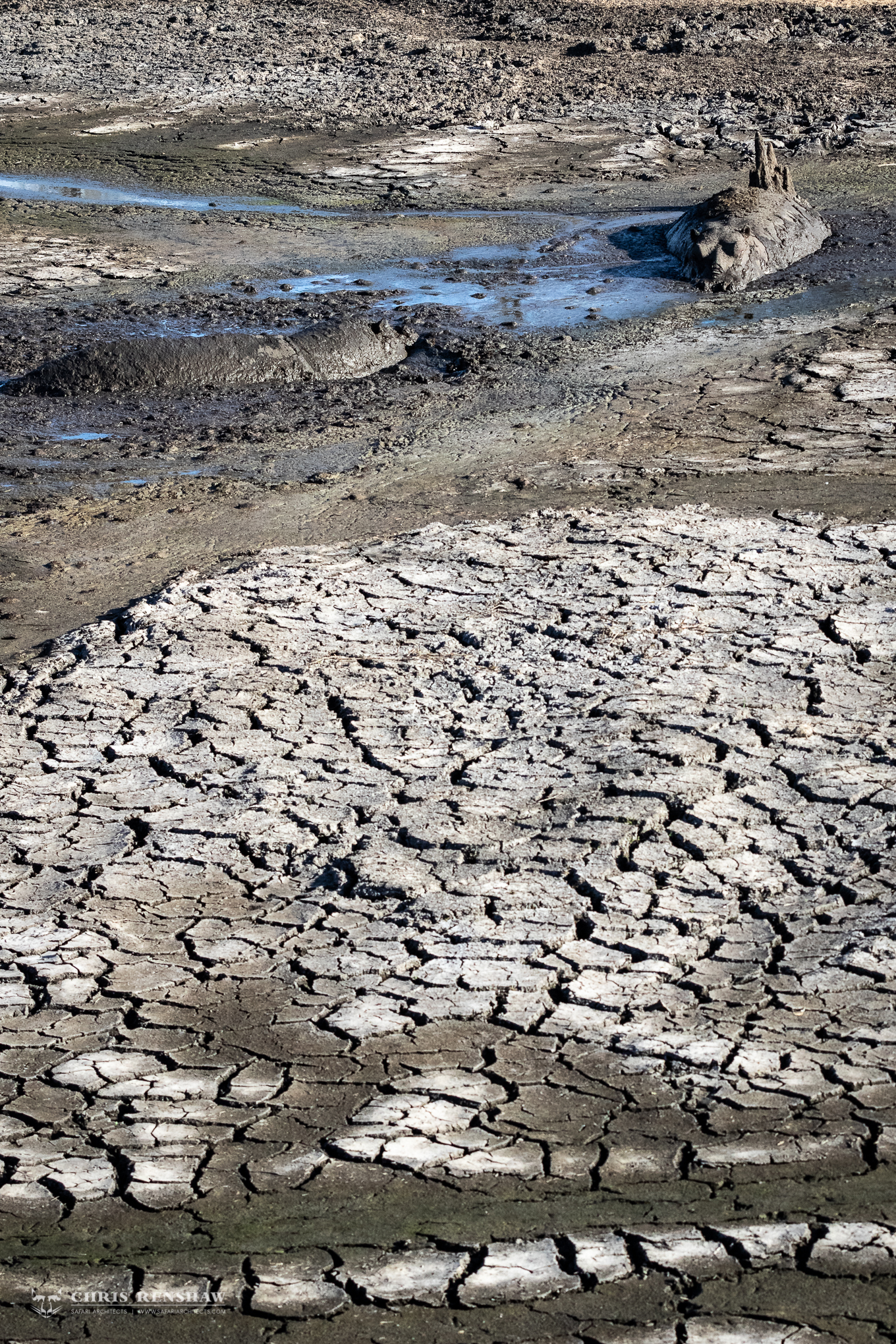 Some other hippos are not so lucky, clinging to every last muddy drop of their plunge pools! 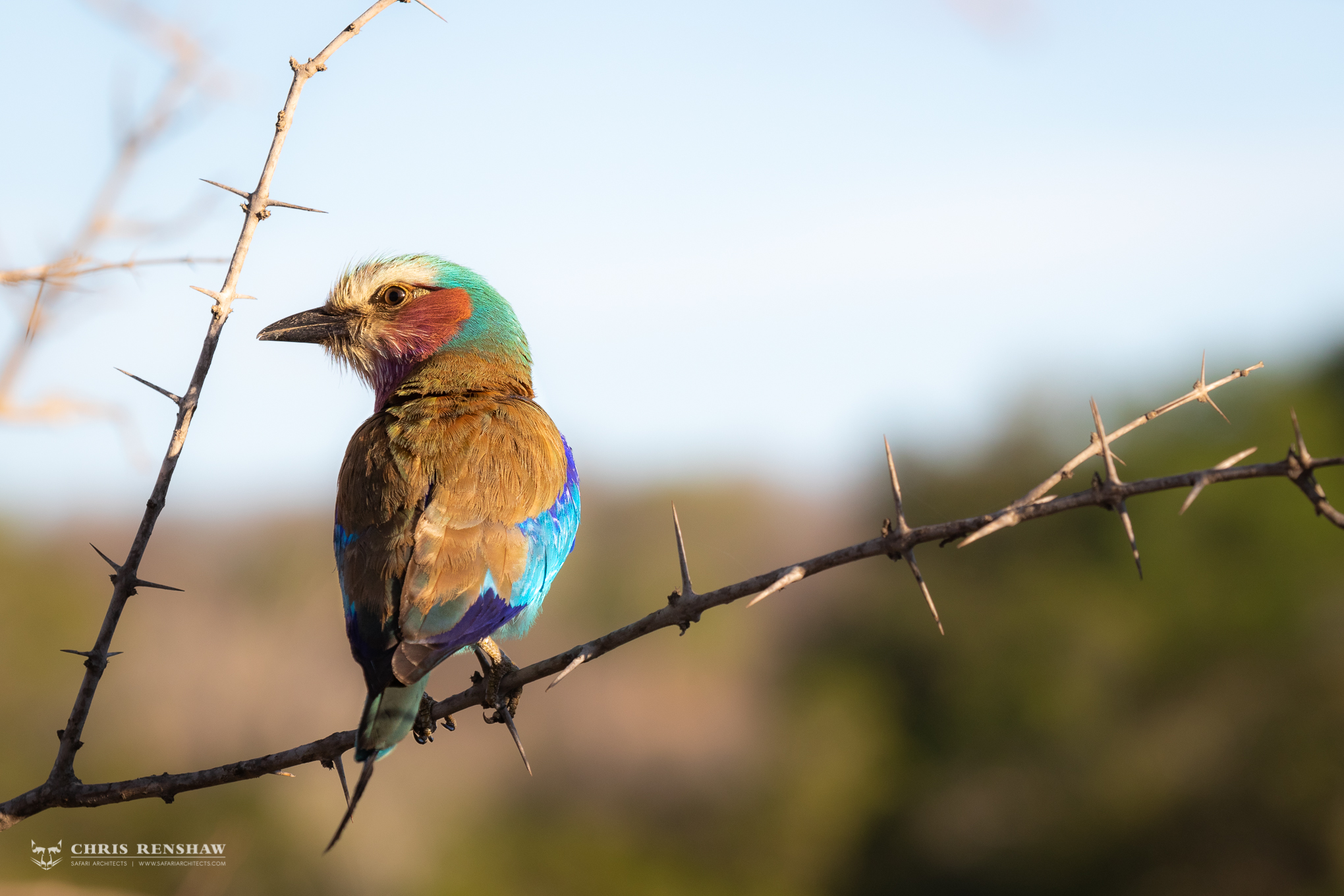 A magnificent lilac-breasted roller, a kaleidoscope of colour all packed into one tiny bird! 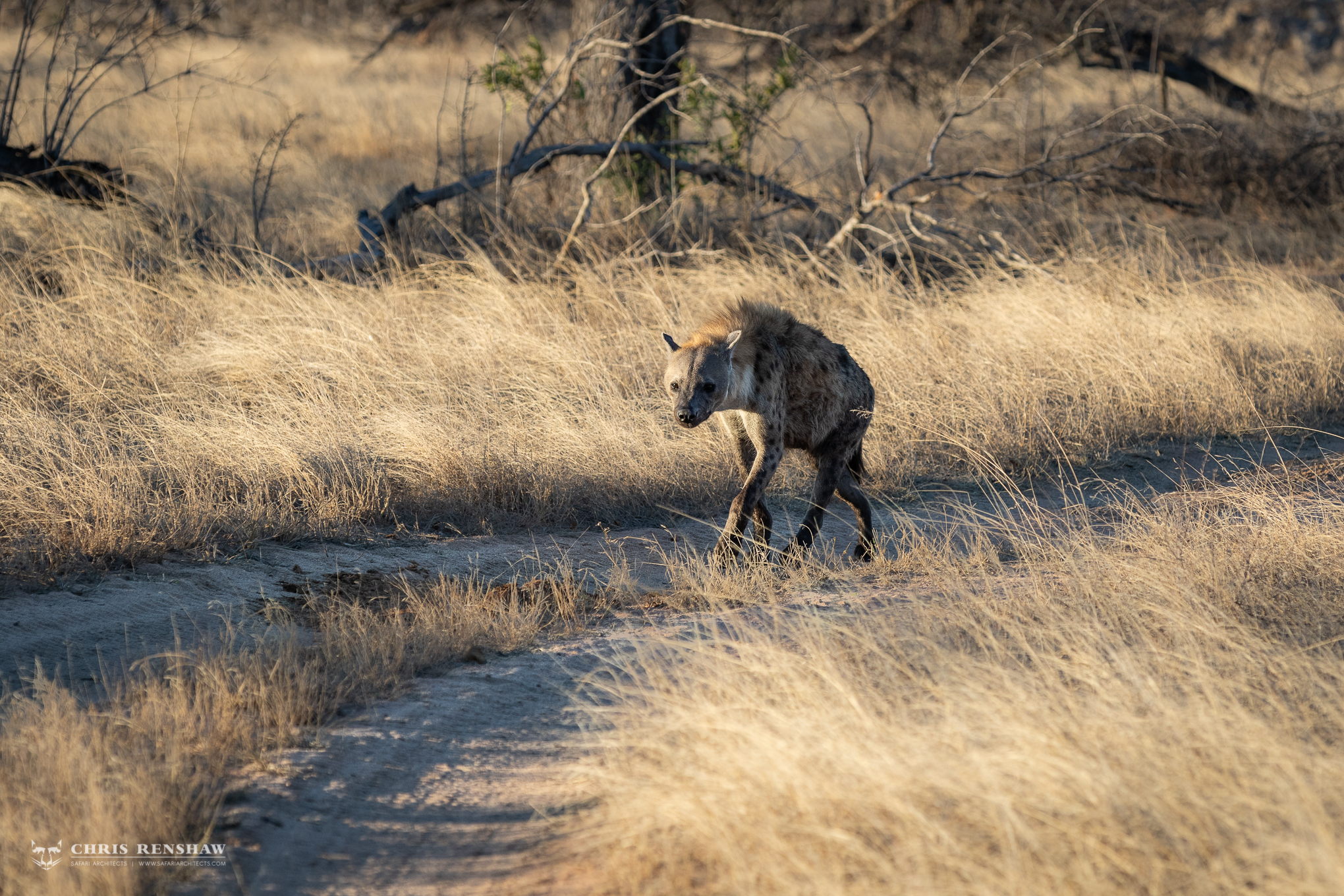 A very relaxed hyena saunters down the road towards us. He had just been sitting in mud wallow, cooling off, leaving him with a flattened, muddy bottom. He, and all other hyenas we came across, was henceforth know as “Muddy Bum”! A massive kudu bull! It is always such a treat to see a fully grown male with such impressive horns. 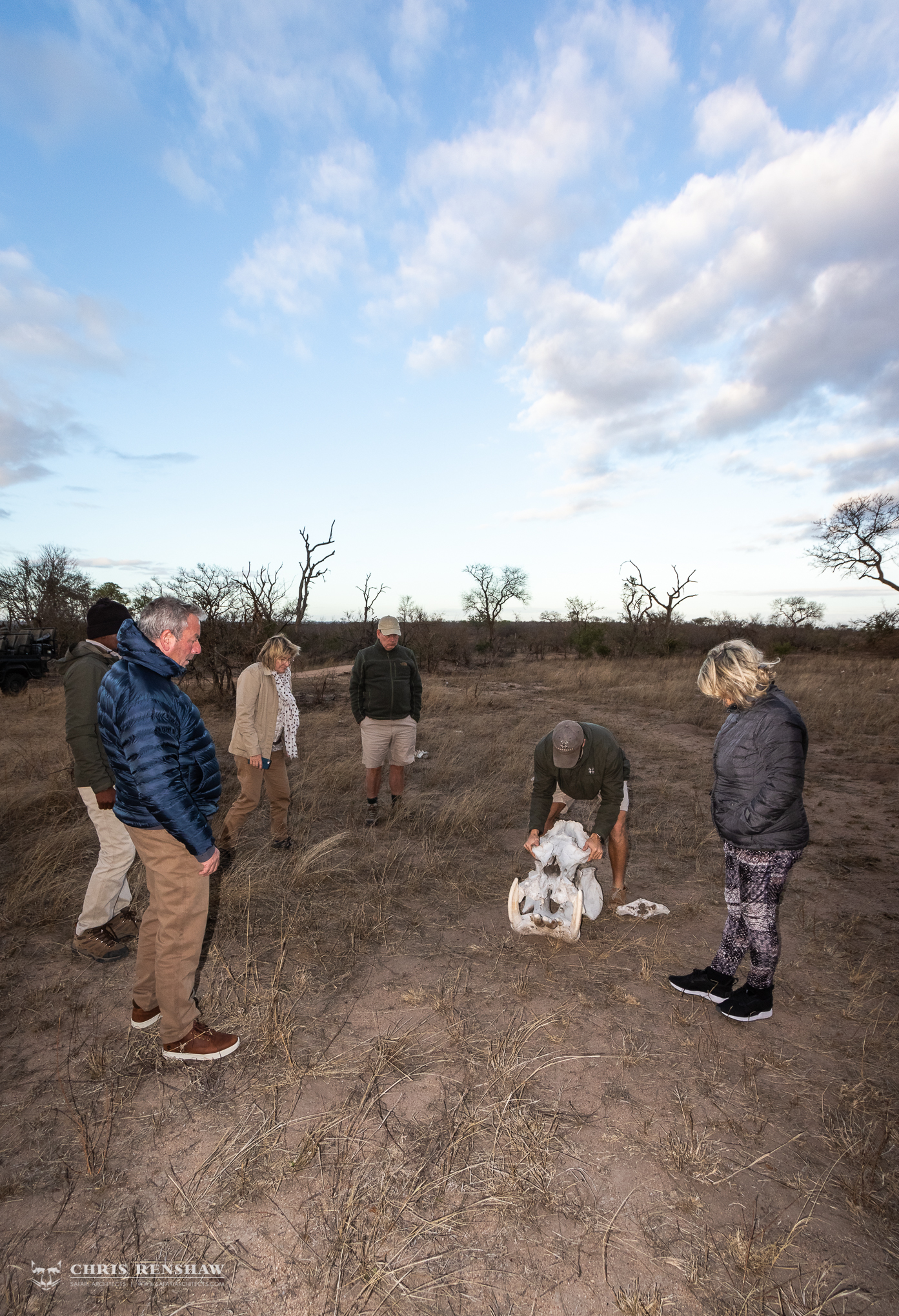 Some much needed rain had brought icy cold weather with it, however, this didn’t cramp our style! We threw on some jackets and got straight back into it. Here, Sean shows us a hippo skull, the results of a drought a few years back. 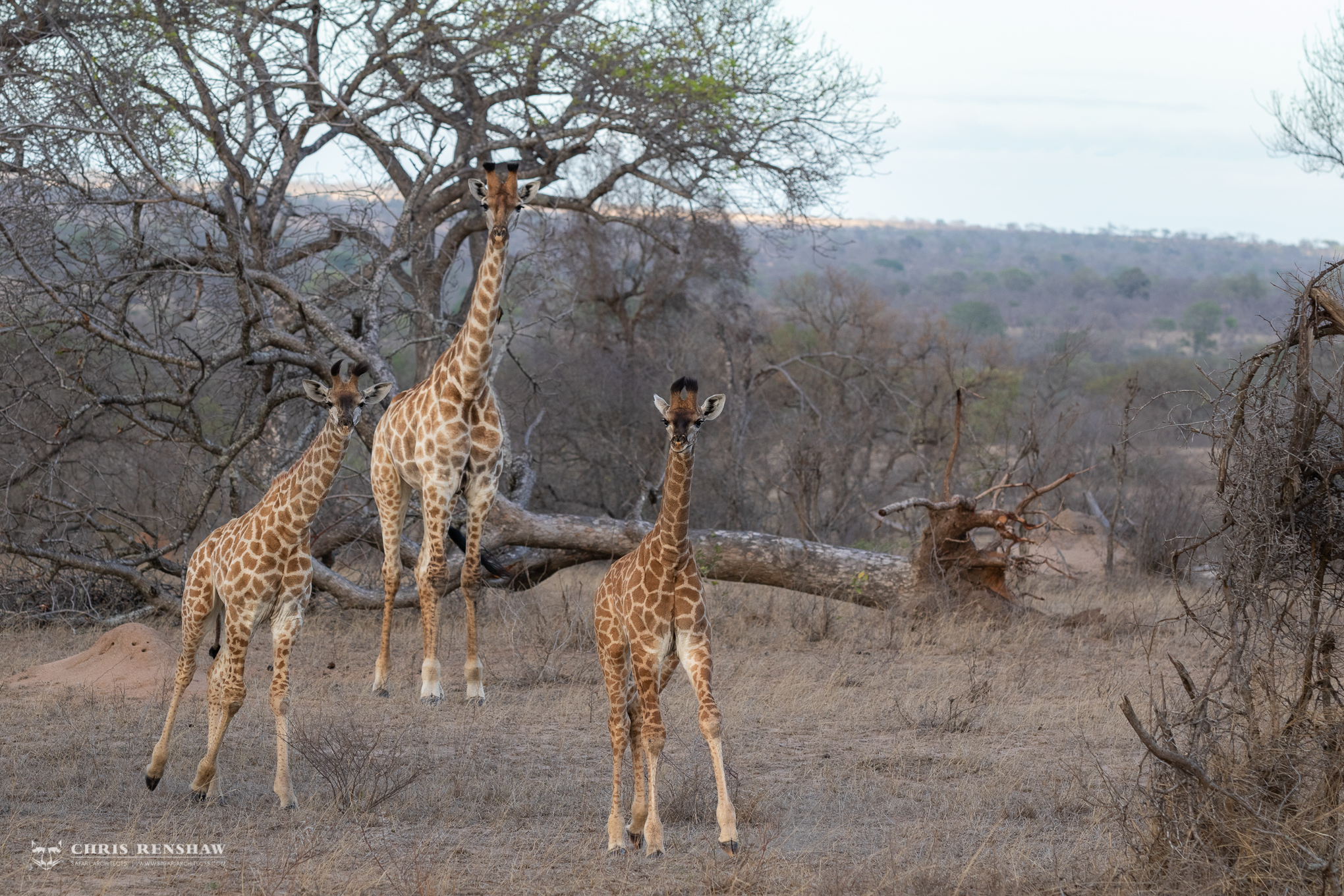 Giraffe were a regular sighting, however, we did get to see some youngsters playing which are not seen as regularly! This baby elephant was trying to use his trunk to pick up a stick. It is always heartwarming yet hilarious to see these calves learning to use such a complex extension of themselves! 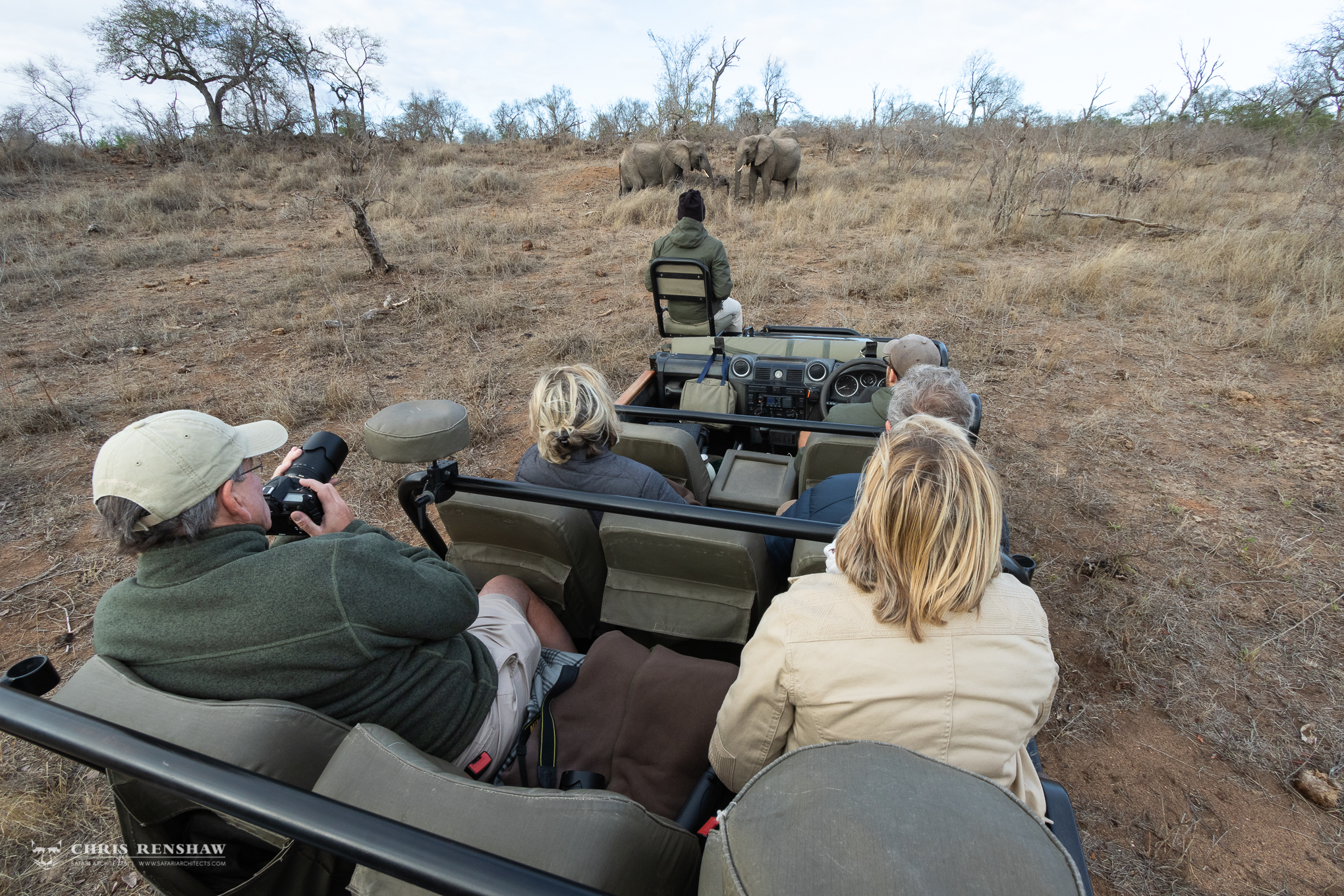 The team and an elephant herd. 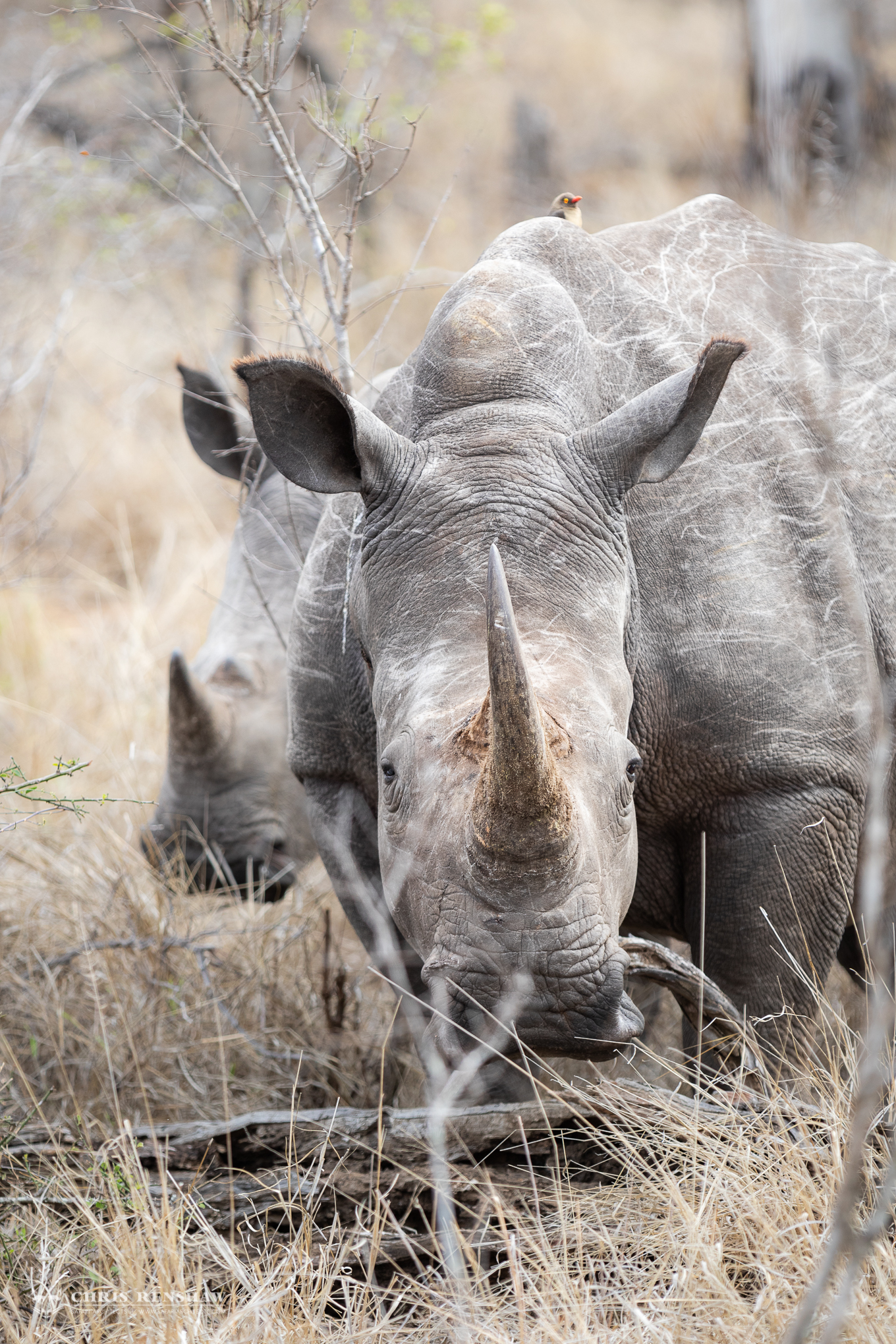 A precious animal under threat… A white rhino and calf grazing lazily alongside us. A truly humbling experience.

Lion dynamics in the area have been rather interesting over the past few years. The Birmingham males have taken over from the the long standing Majinagalane males. They have been very successful in claiming their territory, which has culminated in every male lion’s goal… creating heirs to their throne (more on this later*). The particular male lion we saw was truly impressive. We had a fantastic sighting of him as he searched for his brothers and lionesses who he had been hunting with the night before. The new dominant male lion coalition of the area: one of the stellar Birmingham males. 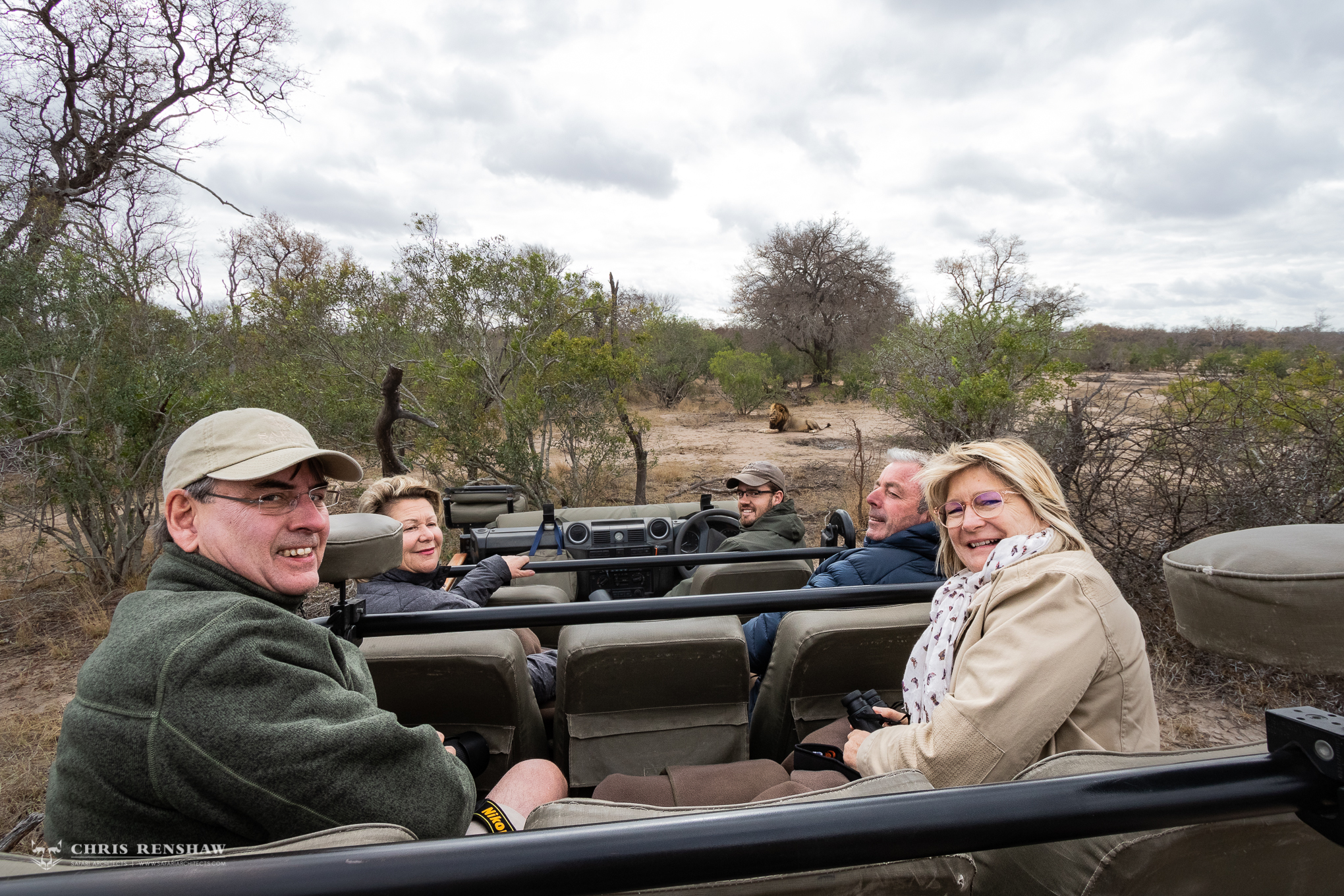 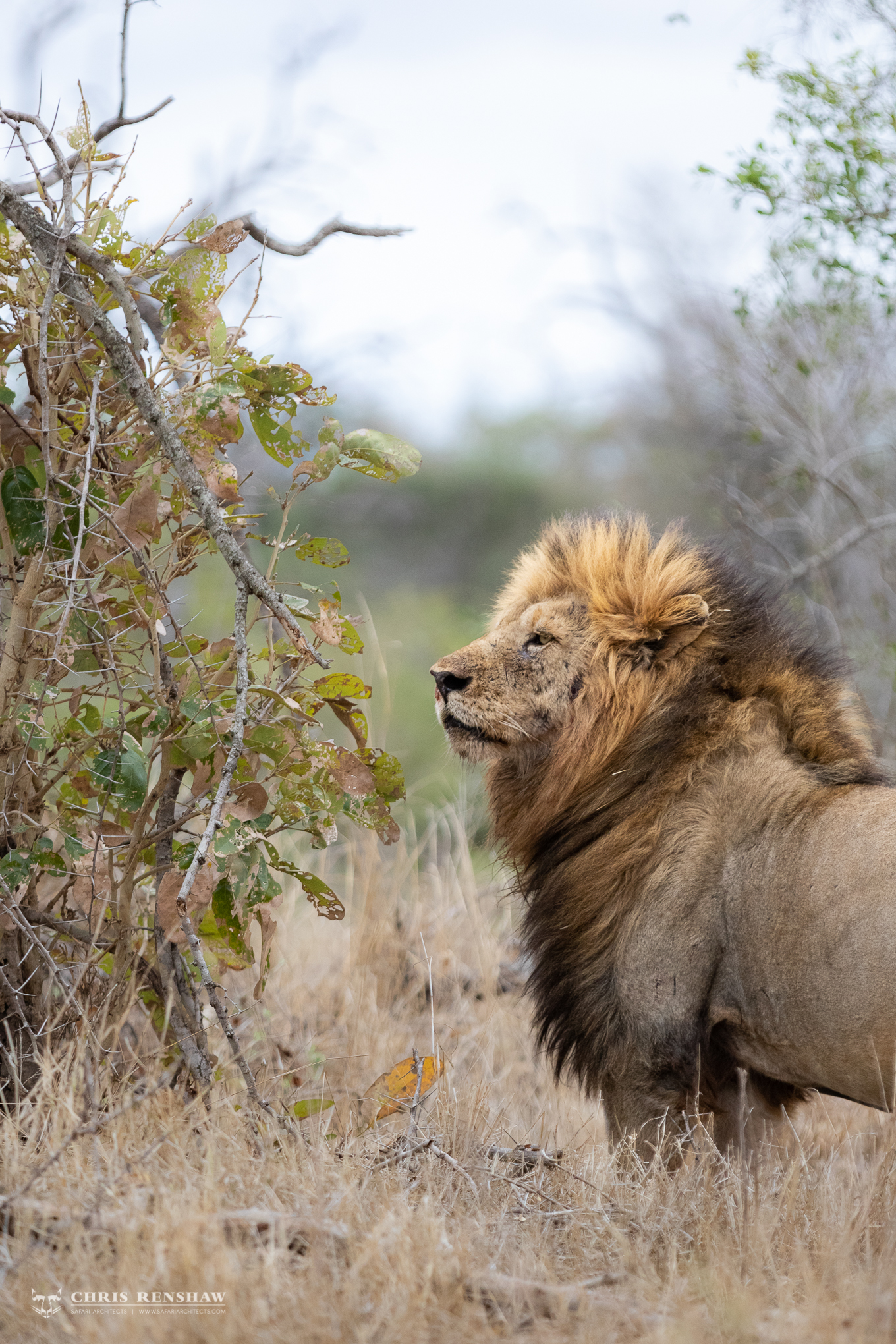 As mentioned earlier, predators were readily active and we truly saw more than we bargained for! Even African wild dogs graced us with their presence, predators known to be naturally elusive. They were playing with a recently killed grey duiker corpse, with the young pups galavanting around trying to learn essential hunting skills. They actually had their chance to practice sooner than expected, as a scrub hare suddenly flashed by and coaxed the pups into a quick chase! The pups had skill but they were helped along by the fact that there was very little shrubbery for the hare to hide in, bringing the game to an quick and not-so-happy ending for the hair. African wild dogs… always such a privilege to see!  They killed a duiker and were playing around with its head… yikes! These little pups were what we were most excited about! Incredible to be in such close proximity.

Londolozi has always been well-known for its abundant leopard sightings. They have large numbers here and are made up of relaxed, habituated territorial males and females. We had a fair number of sightings of both and, even though not entirely unexpected to see them here, these spotted creatures never cease to amaze with their astonishing power and beauty. A leopardess looks up a tree before marking it and moving on. It was at this point that our guides provided a moment of pure magic for us… The Inyathini male leopard, one of the dominant males of Londolozi.

While we were enjoying the company of the female leopard photographed above, Sean and Joy both turned to us with cunning smiles… They had heard some impala making alarm calls nearby. They asked if we trusted them and if we did, we should leave the leopard right away. Not usually one to leave a quality sighting, I looked at Sean uncertainly. However, by the look on his face I knew it was something that could definitely be worth the risk. We hurried away from the sighting and on the way (in broken, wind-swept English) Joy briefly explained: lion – den site – hurry. About five minutes later we were in the spoken-of area and a large lioness came into view, the cause of the barking impalas! Knowing the area well,  Sean and Joy knew that this lioness had cubs somewhere close by. We followed her to a drainage line, and when she started contact calling for cubs… our hearts started to race. A little flicker of movement caught our eye, and out of the thick bush came two little waddling fur balls. What a success! She proceeded to call and then bent down to pick up one of her cubs, presenting me a lifetime photographic goal for myself! In all my years I had never had the opportunity to photograph a lioness carrying a cub. Thank you Sean and Joy for going with your instincts! To celebrate this momentous occasion, we headed off in search of the perfect sundowner drink stop. What a rare and beautiful sighting! A photograph I have been waiting for my whole life… Speechless!

A well-deserved sunset celebration! Thank you Sean and Joy for working your magic.

Our last afternoon was spent simply enjoying the Londolozi landscape and reflecting on the past magical few days. We also arranged a surprise photoshoot with some props and had a good laugh together, making the most of our last moments in the bush. A glass of sparkling wine and a few delicious bites did not hurt either. A wonderful day with new friends and new memories. 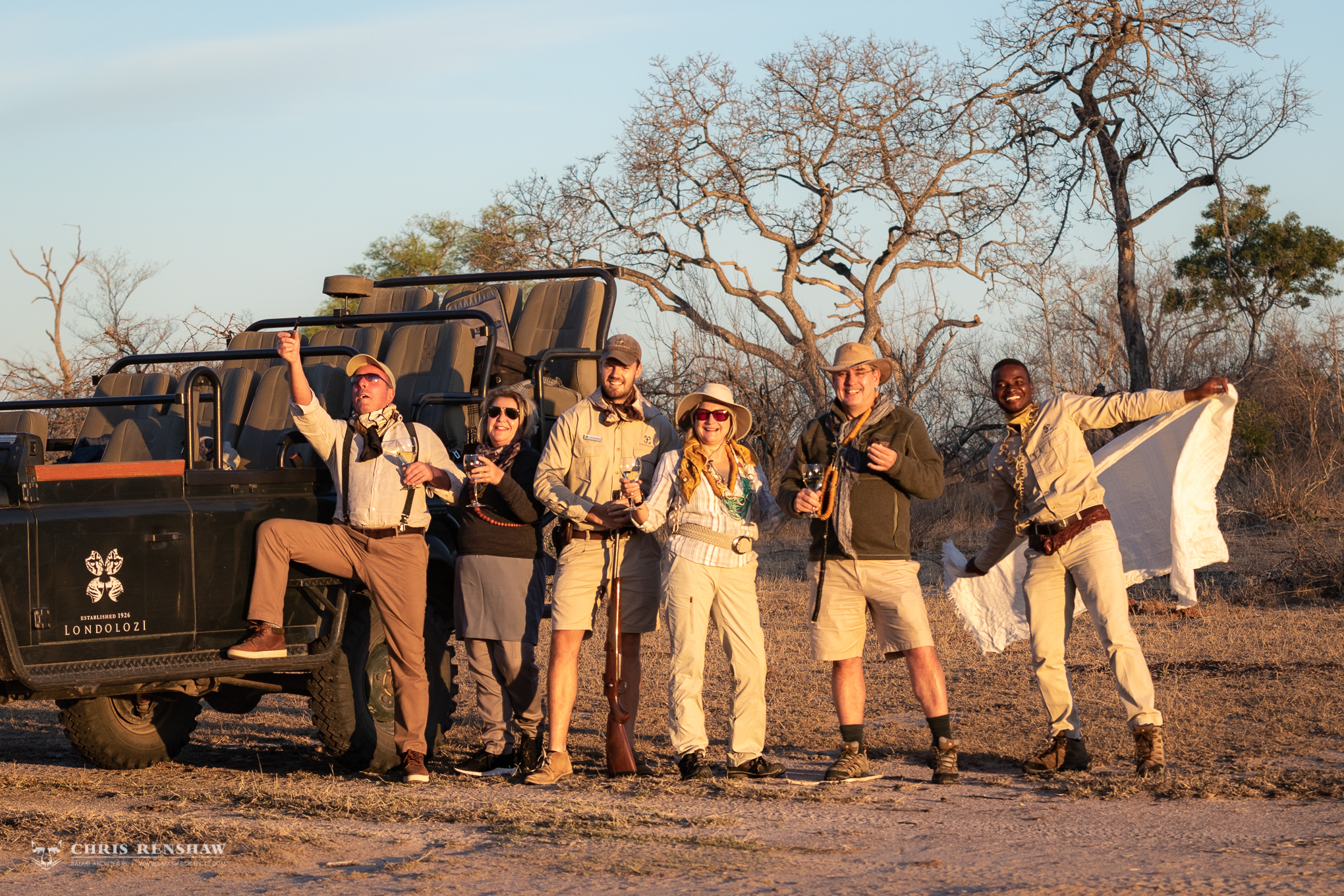 A little dress-up for our last afternoon at Londolozi! Sean and Caitlin, our wonderful hosts!

Thank you to the Lloyds and Gales for an amazing safari. It was beyond expectation and so rewarding! A final thank you to the Londolozi team for making all our safari dreams come true. This place is truly a slice of heaven in the middle of the African wilderness. Here’s to many more adventures in the future!