The Maasai Mara National Reserve in Kenya is an incredibly iconic safari destination in Africa. In addition to there being a multitude of beautiful wildlife species that thrive in this fertile eden, the spectacular Great Migration also passes through here every year. The bountiful Mara River flows through the reserve and it is on these banks where the sheer magnitude and danger of the migration can be seen. Wildebeest and zebra need to cross the water in order to reach grazing pastures on the other side, however, this is not as easy as it sounds. Huge, hungry crocodiles lie patiently waiting for the crossing frenzy to begin, a treat they have been anticipating all year long. To see this crossing spectacle was our main goal, however, Great Plains had a different experience in store for us. The story of our amazing, yet unexpected, journey is recounted below… 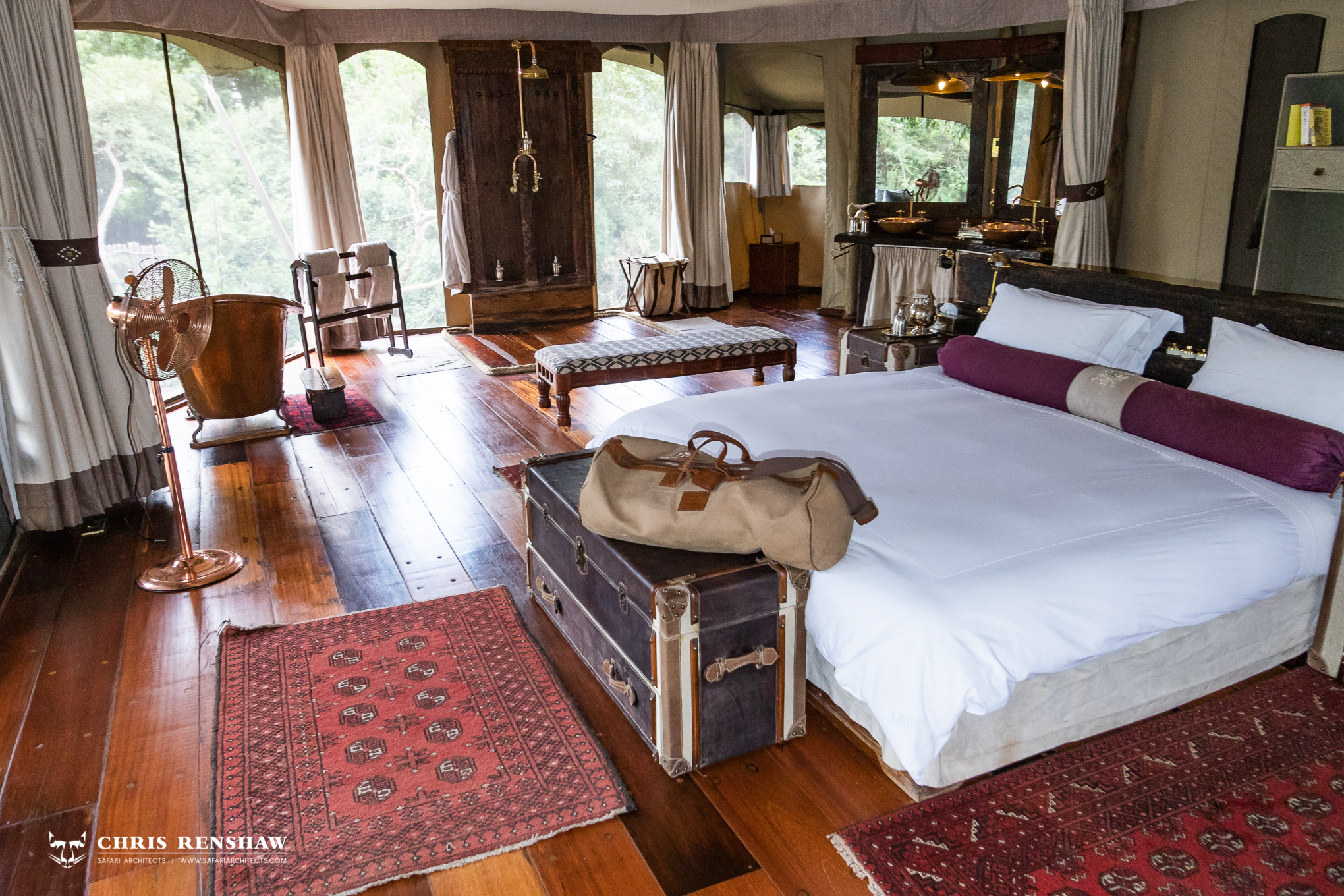 The Kamat family are regular guests of Safari Architects and are always a pleasure to guide and host. When Amrita asked us to plan a to visit the Maasai Mara, we had one place in mind: Great Plains Conservation’s Mara Plains Camp. The camp is located in a private concession adjacent and open to the Maasai Mara Reserve. This means that there are less vehicles in wildlife sightings and truly top notch game viewing! Again, the initial goal of this safari was to see wildebeest or zebra crossing the Mara River, however, with the rains being so erratic this year it was unfortunately not to be. Yet, what we were able to see was much more than we could have ever expected! We witnessed many incredible sightings in the private Olare Motorogi Conservancy, sightings which more than made up for the missed crossings. 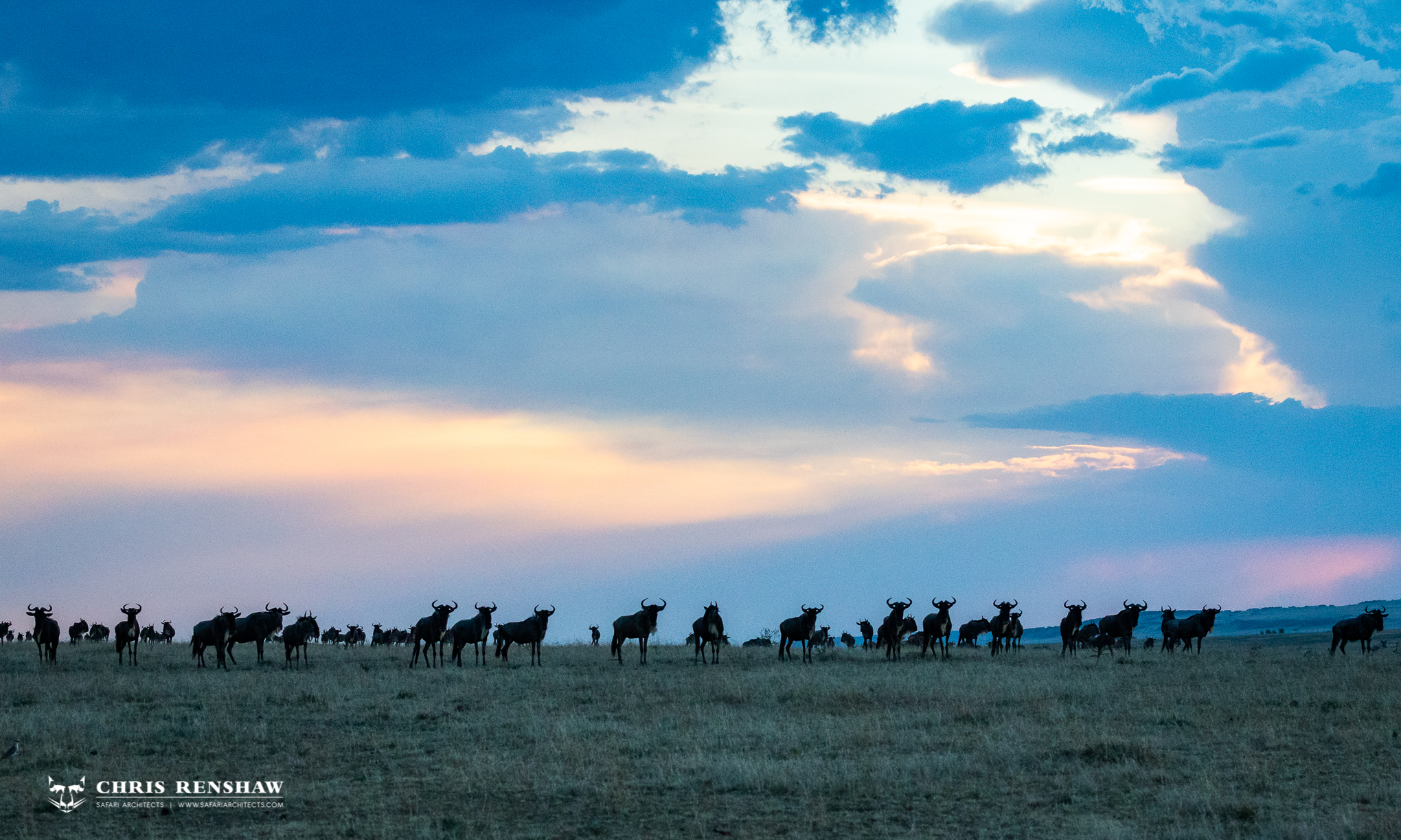 One of the resident herds of wildebeest in the Mara Plains concession. 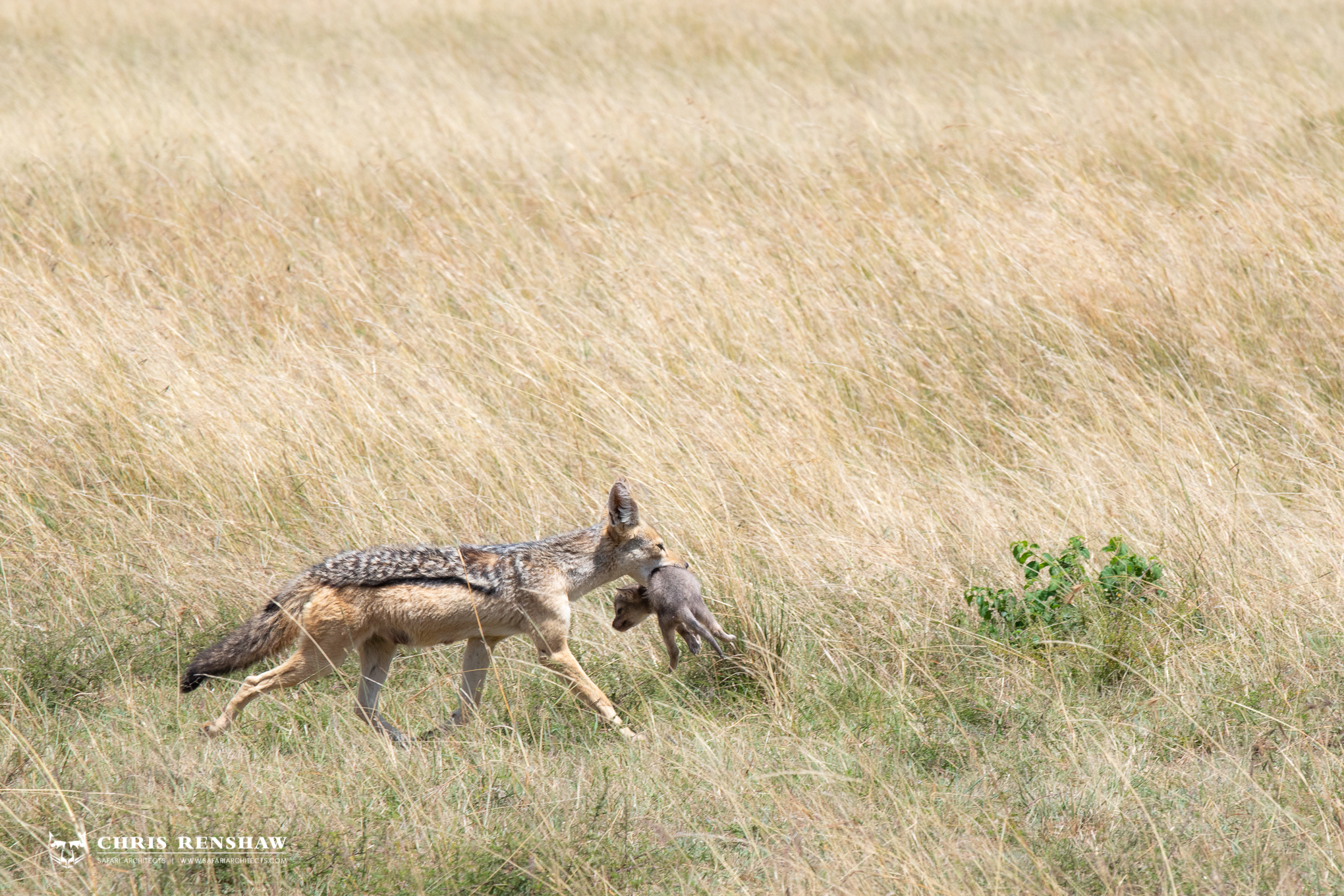 Something very unique: we watched this black-backed jackal moving her pups to a new den site, a first for both my guest and I! A typical Maasai Mara scene: sun rays breaking through the clouds of an approaching storm, thus illuminating the rolling plains. 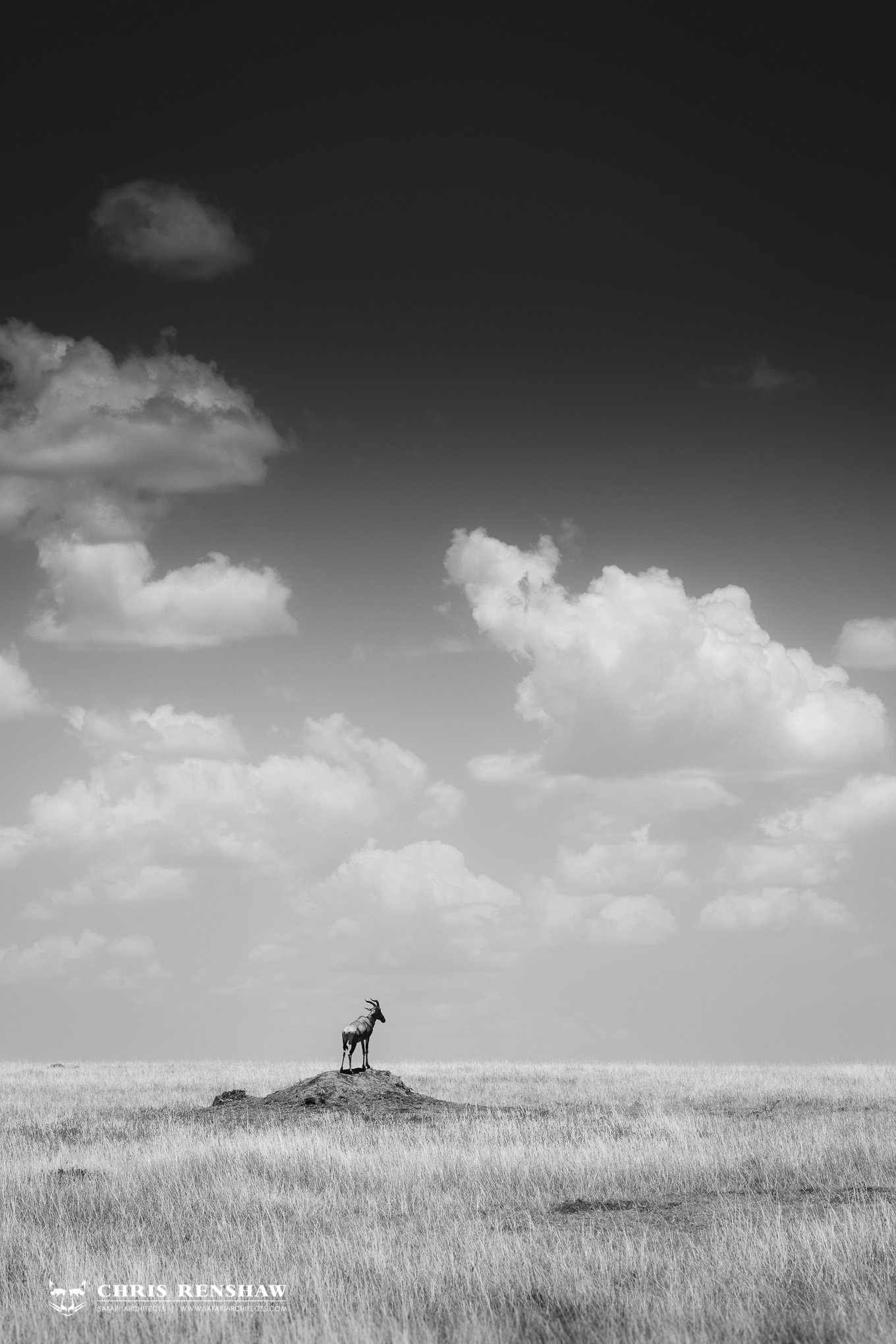 A male topi stands tall on a termite mound, checking his territory for any potential females. 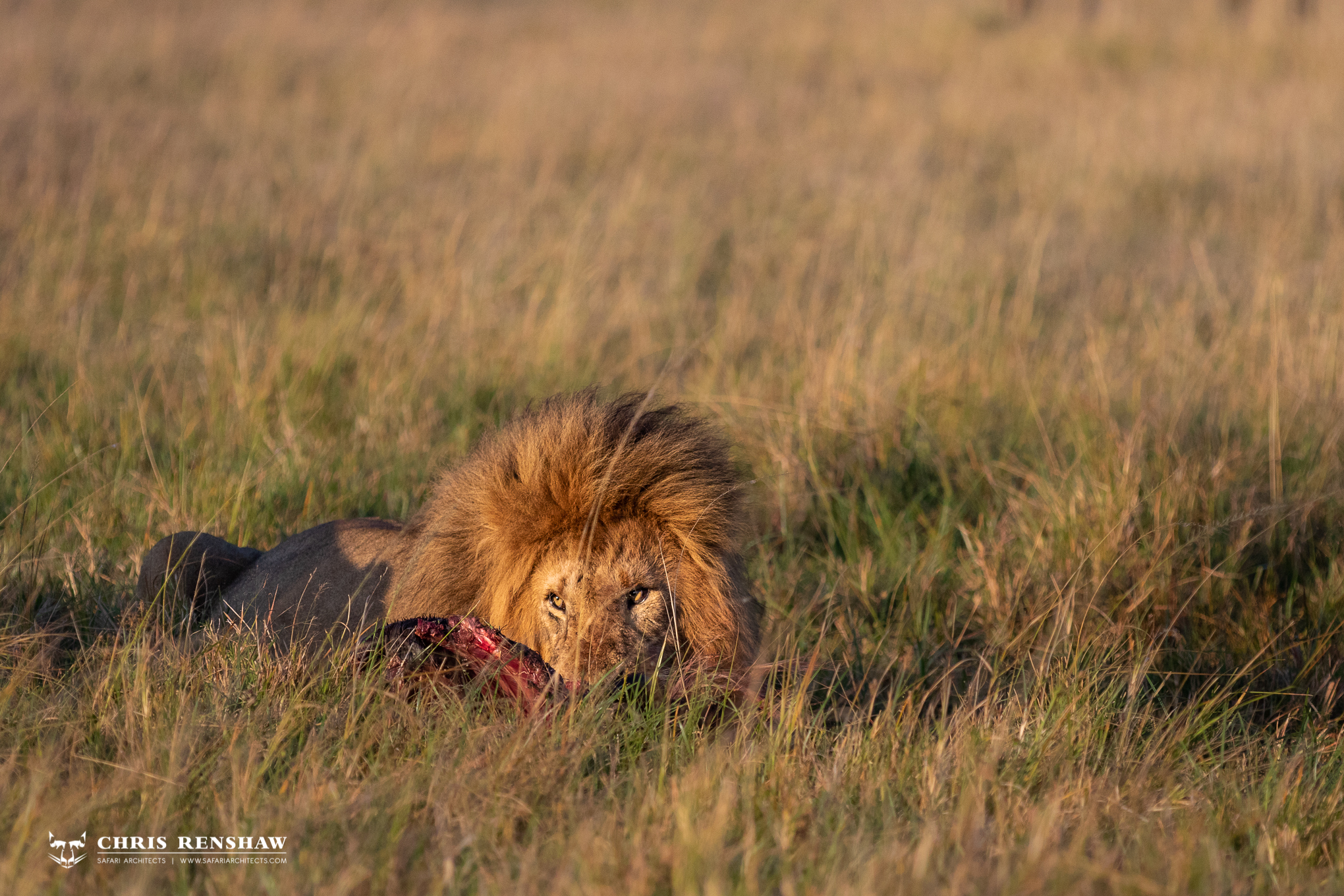 It’s mine! A male lion feeding on the remains of a kill made the night before. 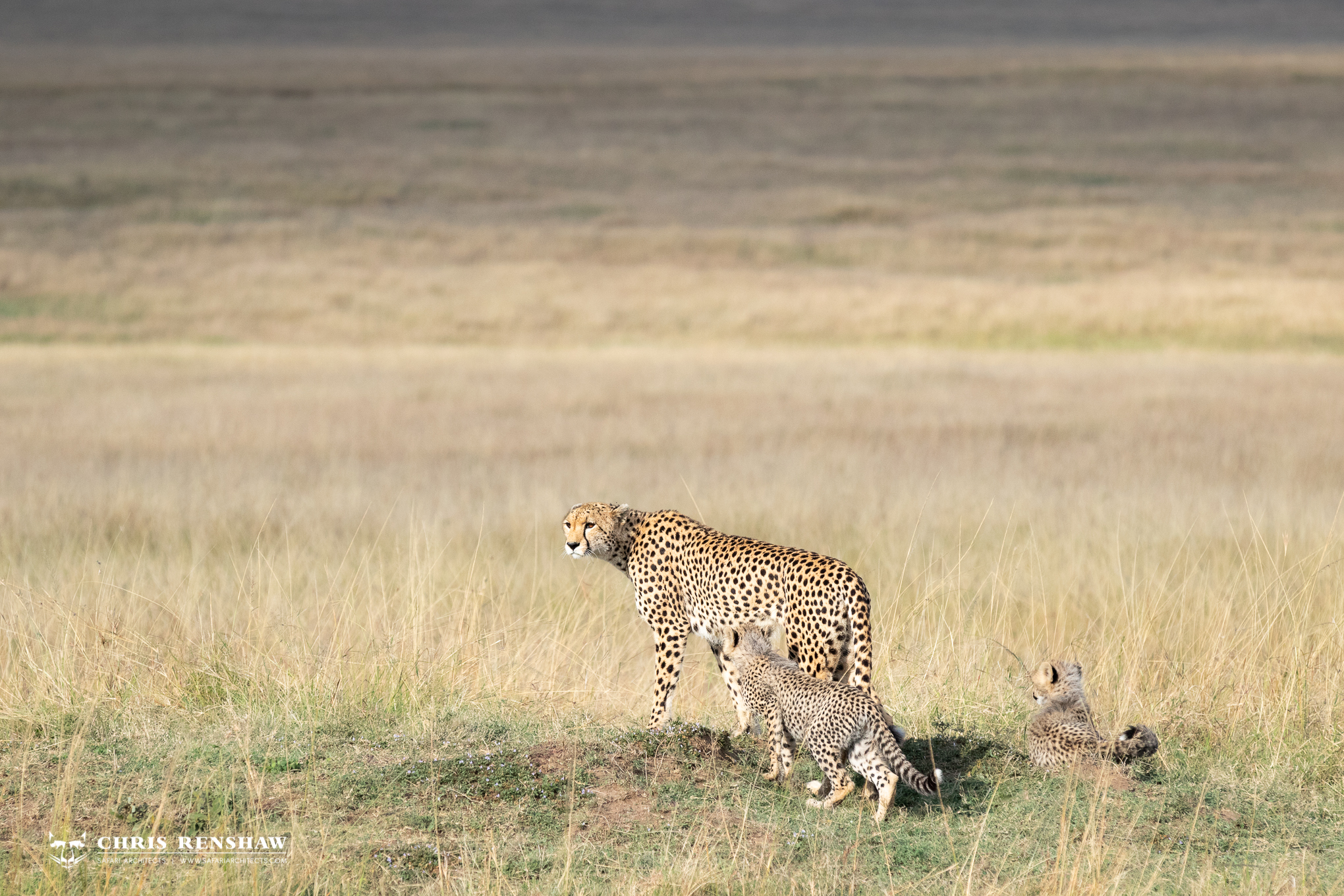 A mother cheetah with her cubs. We had phenomenal cheetah viewing whilst in the Mara. These rare cats thrive in this ecosystem, even with the pressures of hyena, leopard and  lion populations. 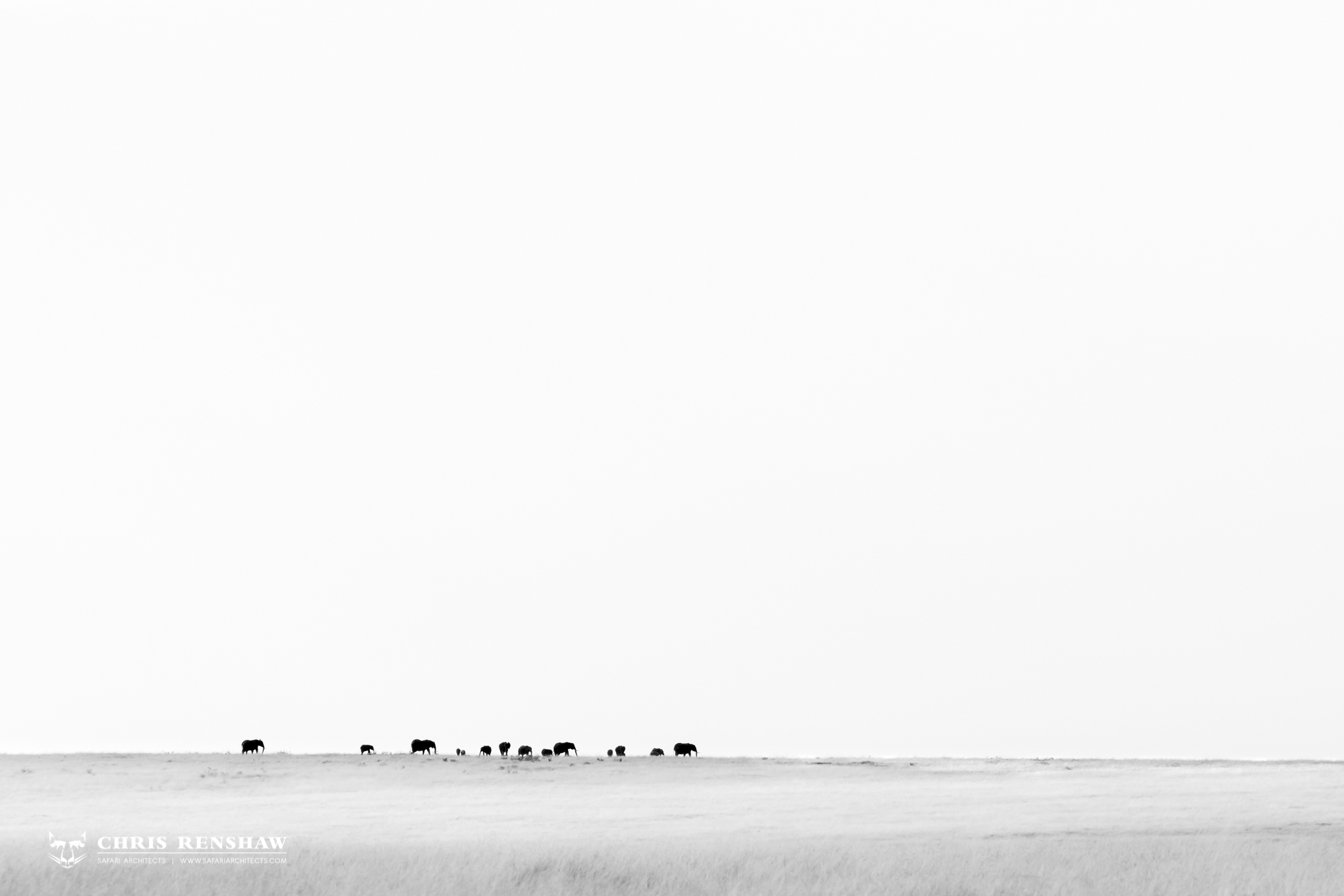 A herd of elephants is dwarfed by the huge open spaces which the Mara offers.

We spent our early mornings exploring the private concession and then, with a delicious picnic lunch, headed down towards the river and wait patiently for any zebra or wildebeest to cross. We nearly got lucky a few times, but after many hours concluded that this was not to be. We did, however, get to see some elephants cross the river! They played, waded through the water and gave us quite a show.

We also got to see a pride of lions bring down two zebra within thirty seconds of each other. The scene was pure, wild mayhem, but proved to us the strength of fully grown lionesses. We were also fortunate enough to witness some amazing interactions within a group of crocodiles, all fighting over the carcass of a wildebeest killed earlier. The crocodiles were truly the biggest I had ever seen, and how impressive to watch them do what they do best!

Our evenings were spent watching multi-coloured sunsets spread across the plains, with cold beverages in hand and the best company anyone could ask for… A little brunch on the Mara River edge, waiting for any possible wildebeest or zebra crossings. 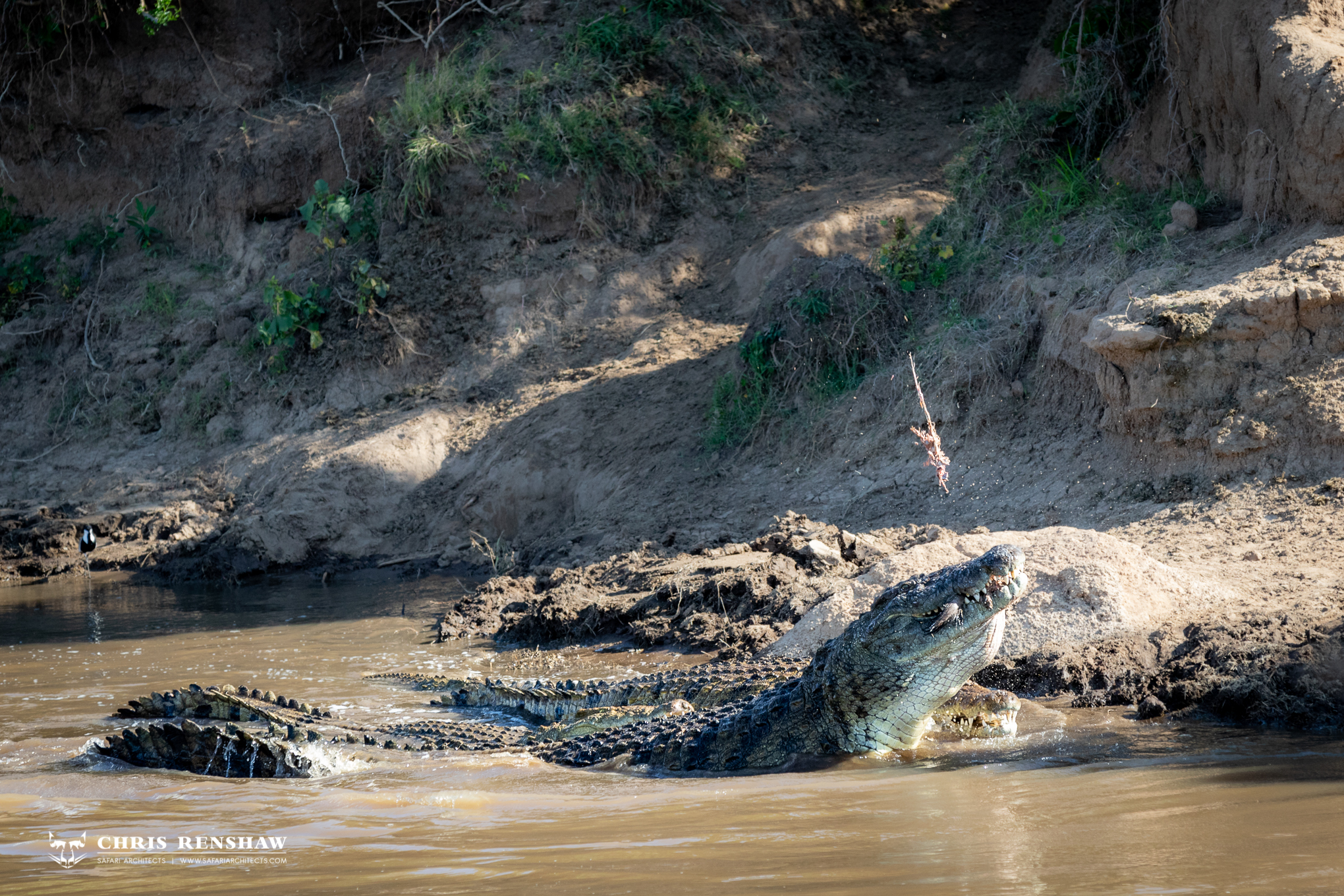 Two huge Nile crocodiles fight over the remains of a wildebeest that succumbed to these hungry beasts. 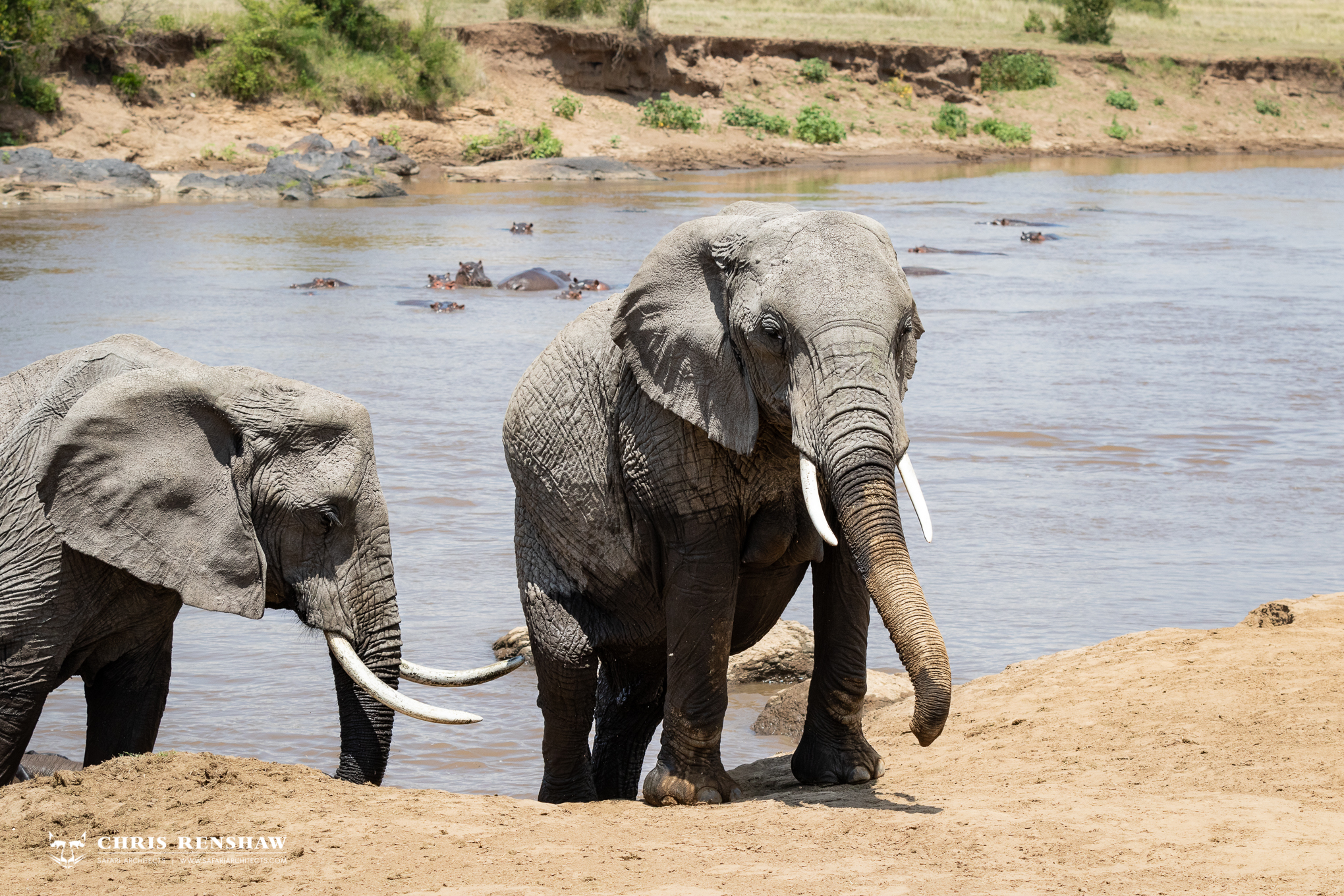 Instead of a wildebeest or zebra crossings, we got to see a herd of elephants crossing the Mara River. Playing and galavanting in these crocodile-infested waters, just showed us the difference size can make! A youngster completely refreshed with a glint of mischief in his eyes. 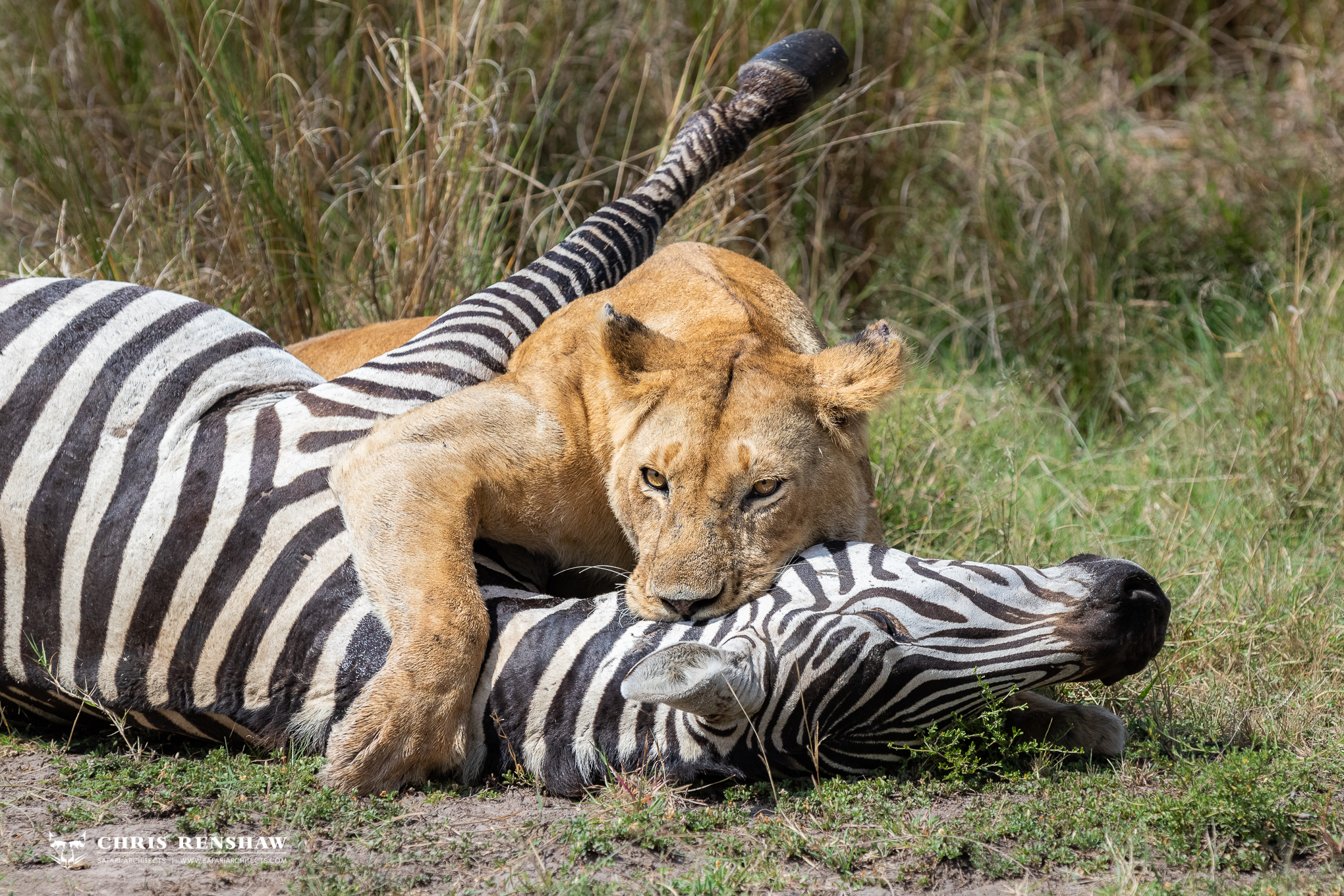 We had so many incredible encounters whilst in the Mara. We were lucky enough to witness a lion pride kill two zebras in the space of only a few seconds right in front of us. Intense is an understatement! 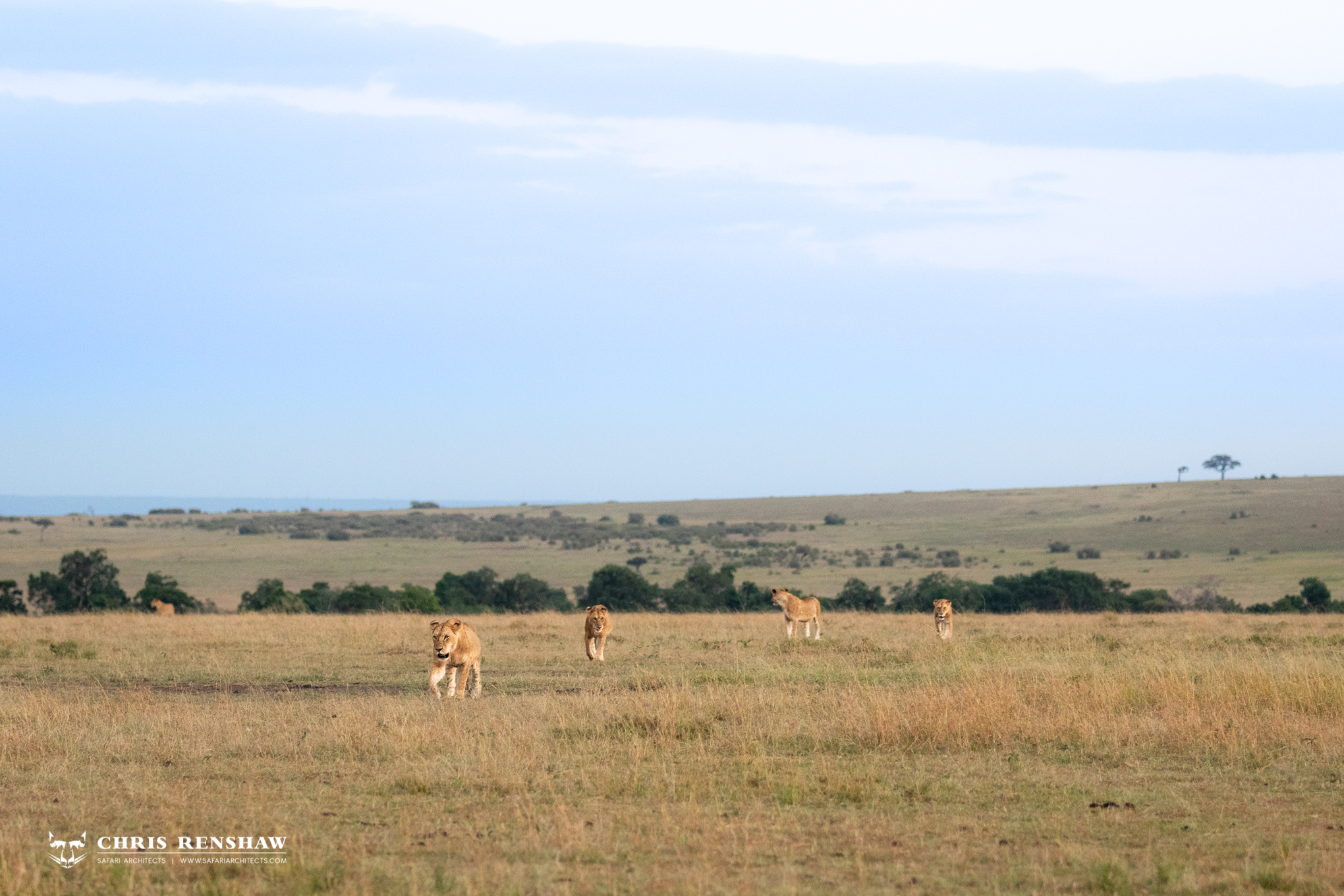 We saw a pride of lions on most drives. This was the resident pride in the Mara Plans concession. 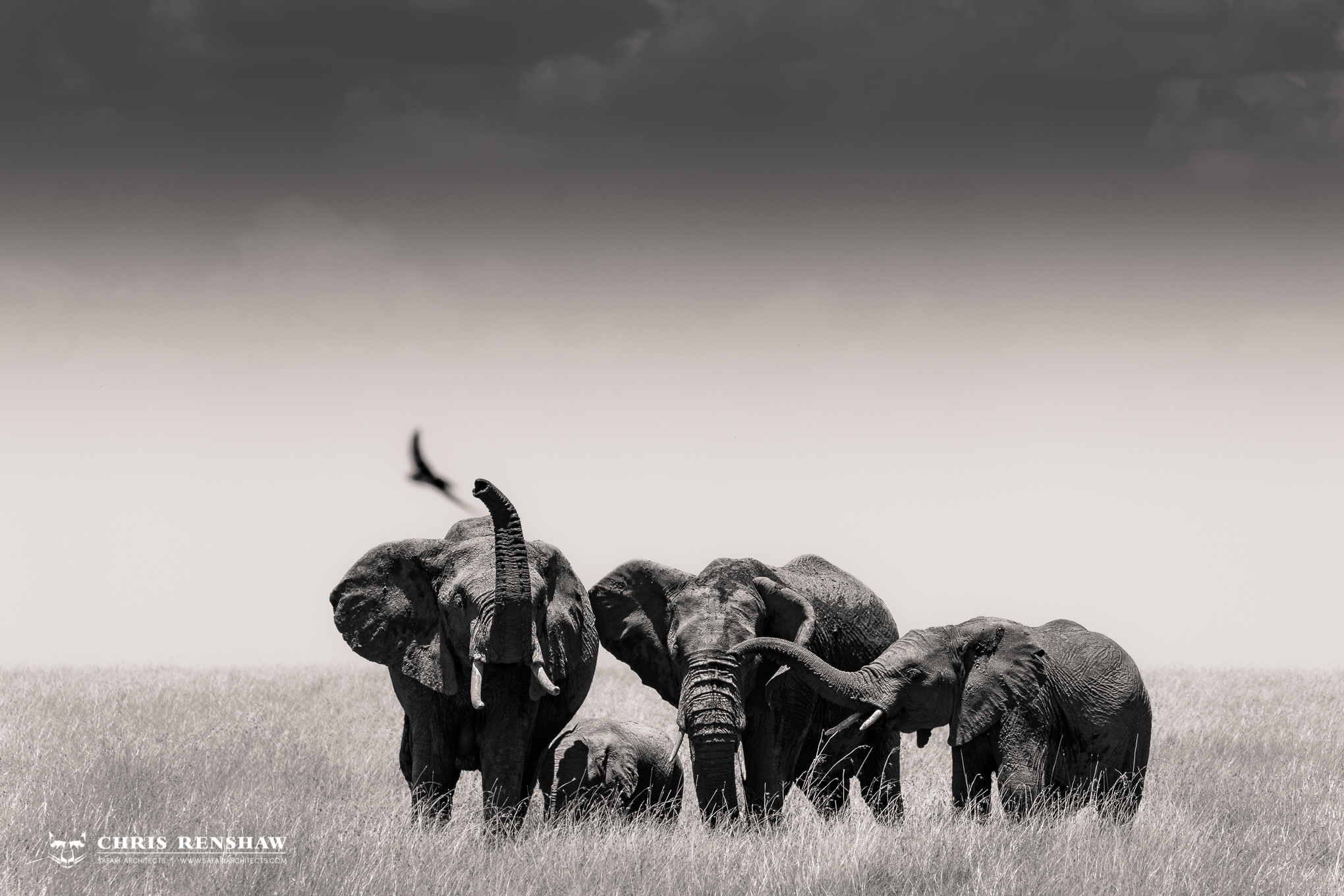 A herd of elephants salutes us on the way home from another successful morning, whilst a swooping swallow decides to photobomb!

Yet another highlight of this trip was spending time with the famous male cheetah coalition known as the “Five Musketeers”. They ventured onto the private concession which meant that we had a lot more time to spend with, and less vehicles to put pressure on, these enigmatic and beautiful cats. On one of the days we witnessed them having a few attempts at a wildebeest herd. After giving up, they retired under the shade of the only tree within kilometres. We let them settle in and dashed back for lunch. On our return, they were up and mobile. We positioned on the opposite side of the large wildebeest herd, in hopes that they would have a full go at hunting, and we were certainly not disappointed! The lead male moved nonchalantly towards the herd, yet in an instant dropped the excelerator and started to chase a single wildebeest. Once he had caught up with it, the other four males jumped in and, after about 20 minutes, they finally brought this brave yet unfortunate wildebeest to the ground. A once in a lifetime opportunity and sighting! After a while hyenas started to gather, however, the cheetah males stood their ground and made sure they had their fill before abandoning the carcass. 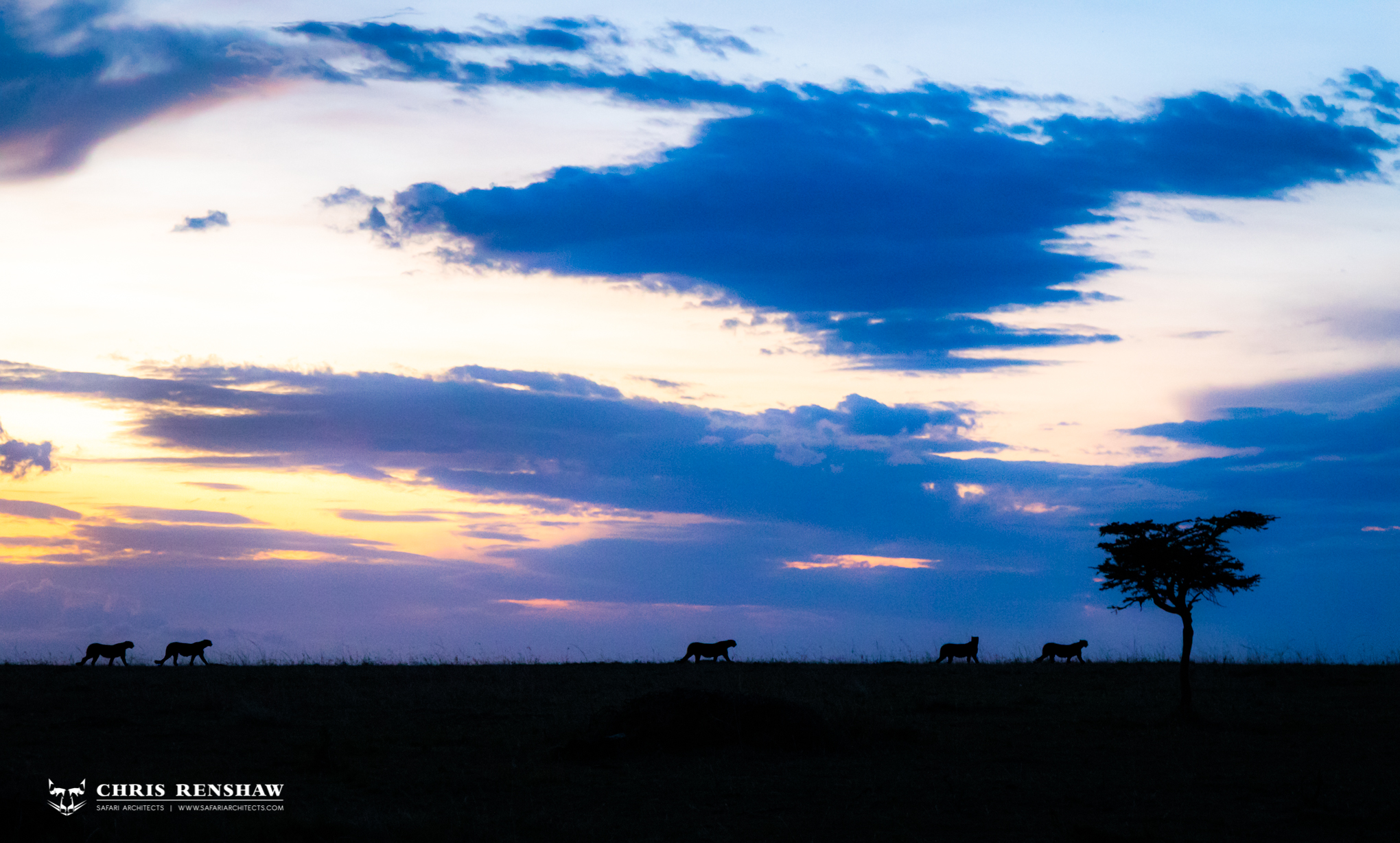 The “Five Musketeers”, the famous cheetah coalition of the Maasai Mara. The start of an epic showdown! 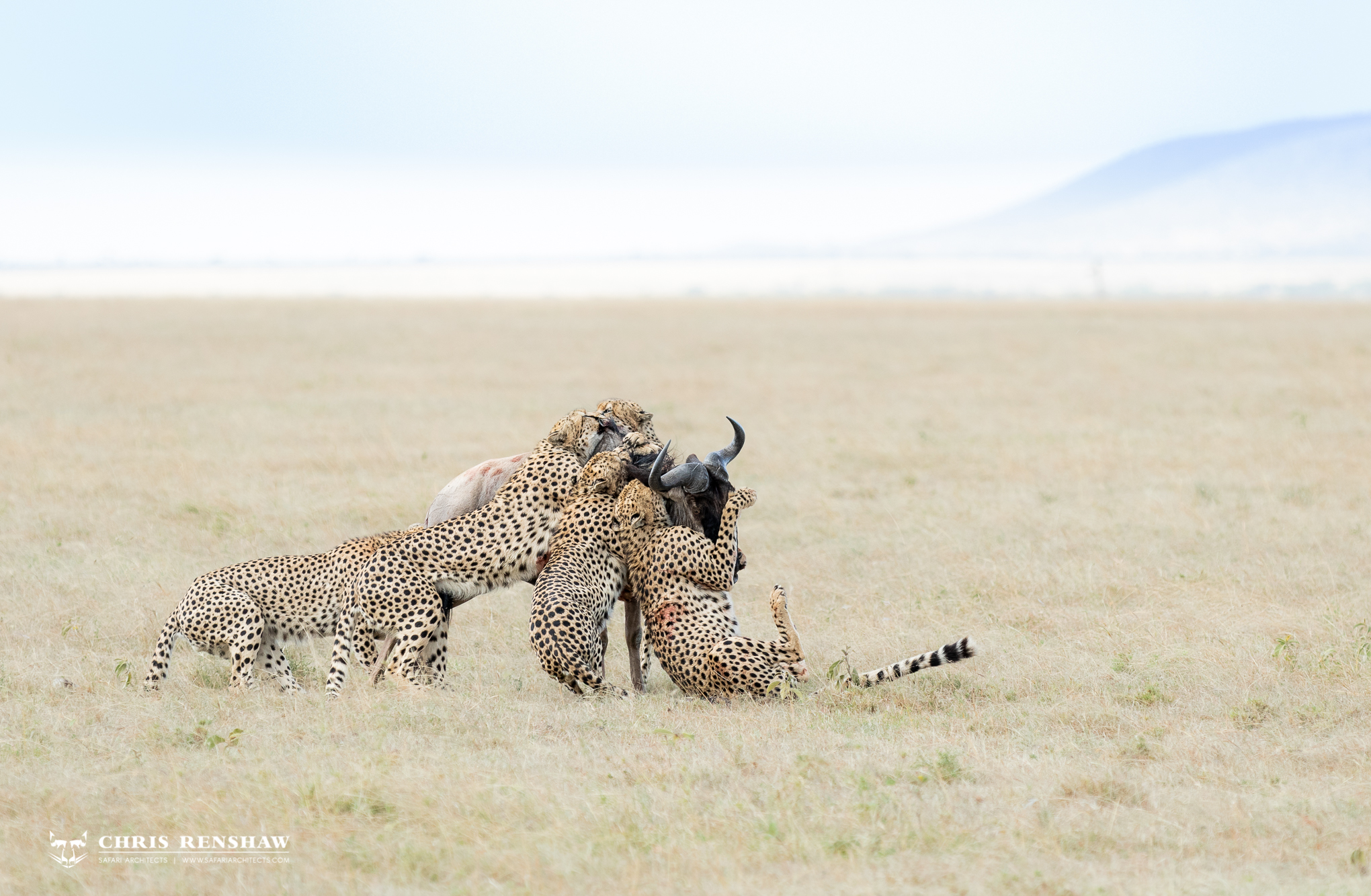 The group bringing down the wildebeest, such an amazing sighting which we were able to watch from start to finish. 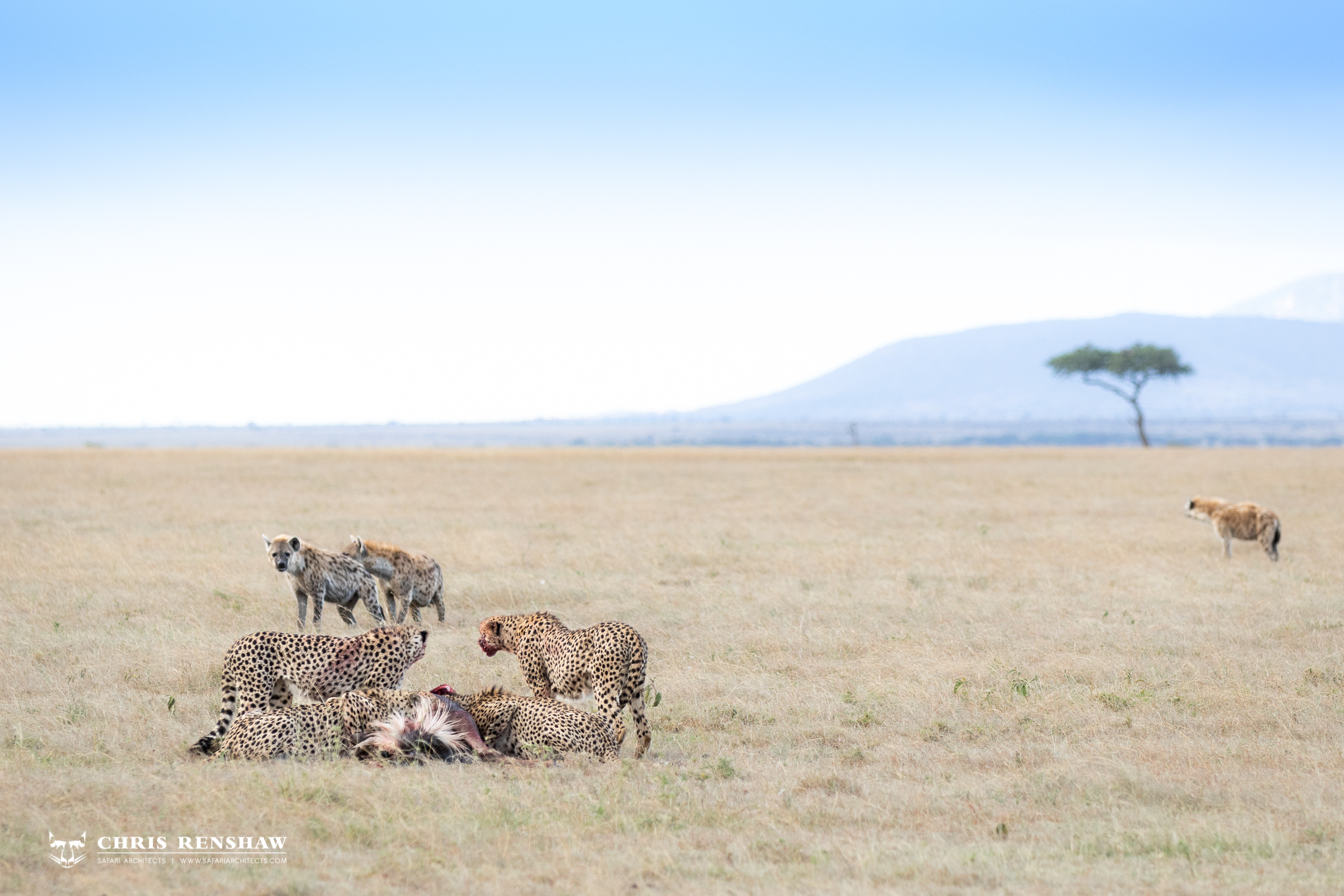 Even the hyenas got in on the action! The cheetahs, however, managed to fill their bellies before leaving the scraps. 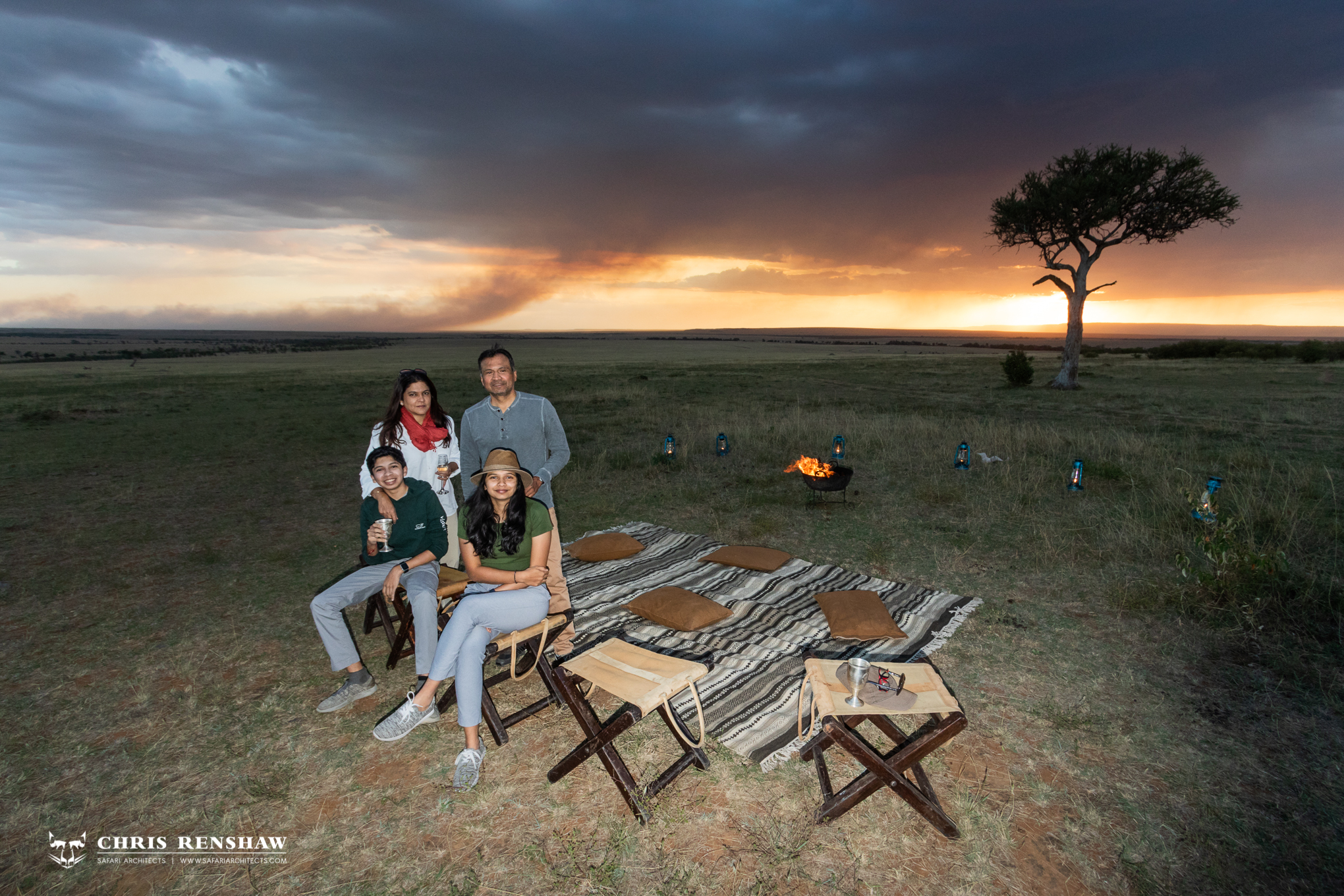 A birthday surprise on our final afternoon for Mira – aka “Maasai Mara” was a fantastic way to say goodbye to this wonderful part of Africa. Thank you to Aashish, Amrita, Mira and Nikhil, for once again allowing us to plan and host your family safari. We look forward to the next one!

The Luster & Luxury of Londolozi