The Leopard and the Genet

“When was the last time you saw a Leopard?”

When trying to start this story, I battled for an opening line. One that would entice you the reader, to read more.  I put many ideas down, but none, I feel, worked as well as the one here: “When was the last time you saw a leopard?” The reason this line captivated me so much, is because I imagine there are many people out there, possibly even reading this story, who have never seen a leopard. And so my question is not an arrogant one, but a mere question to arouse interest in this fascinating story. The story of the “leopard and the genet”.

There are places we visit on safari, places we frequent where leopards are seen on a regular basis. Some are still shy and elusive as we expect leopards to be, but some are proud of their beauty and show their spots without reluctance. They come out and more often than not, give the viewer a sneak peek into their fascinating lives. Each time I see a leopard and spend time with an individual, I learn. I see something new and understand a little bit more about these incredible creatures. This was the case on a recent safari to Kirkmans Kamp in the Sabi Sands Game Reserve.

Heading out on game drive with the intention of exploring some new areas but open to the idea of pursuing any sign of leopard, we were focused and alert. Fortunately for us, in no time at all we spotted a female leopard. Known in the area as Ndzilo – meaning “fire” in the local Shangaan language. (She got her name from an incident as a cub where she somehow singed off her whiskers after a bush fire.)

Our excitement levels were high as we began to follow her through the long grass that was scattered with dense thickets, that she used to stay hidden. She moved tentatively, purposefully and soon stopped next to a fallen tree (Acacia nilotica), which due to the recent rains, was now densely smothered by grass. Something had caught her attention and she moved ever so slowly, peering through the grass, listening and watching for any movement. She paused for over a minute, perked her ears up, listened, and then exploded into the thicket like a bullet from a gun.

Ndzilo was after a large adult spotted genet that swiftly made its escape out of the ticket and up the nearest tree to the safety of the smaller branches. No luck this time for this elusive huntress. She settled briefly on her vantage point, staring up at the genet, which was now just out of reach in the tree above her. 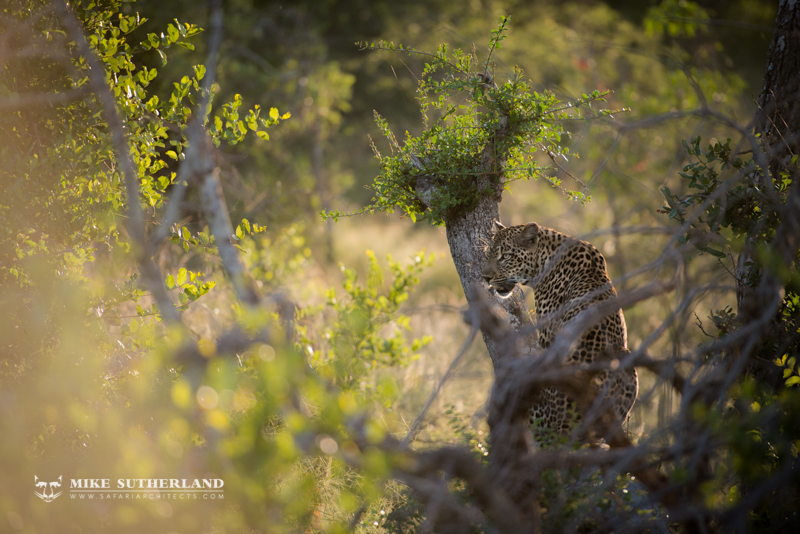 The Ndzilo female peers over her shoulder listening to the world around her.

It seemed as if the brief moment of excitement was now behind us and we could settle back into to our seats. But this wasn’t to be the case. Ndzilo peered once more into the depths of the thicket. With her acute hearing and eyesight, the leopard noticed more movement beneath her. Like a red fox in snow, she dived head first through the undergrowth, pinpointing her prey and emerging with the smallest genet kitten in her mouth.

She peered beneath her at more movement as we watched in silence. 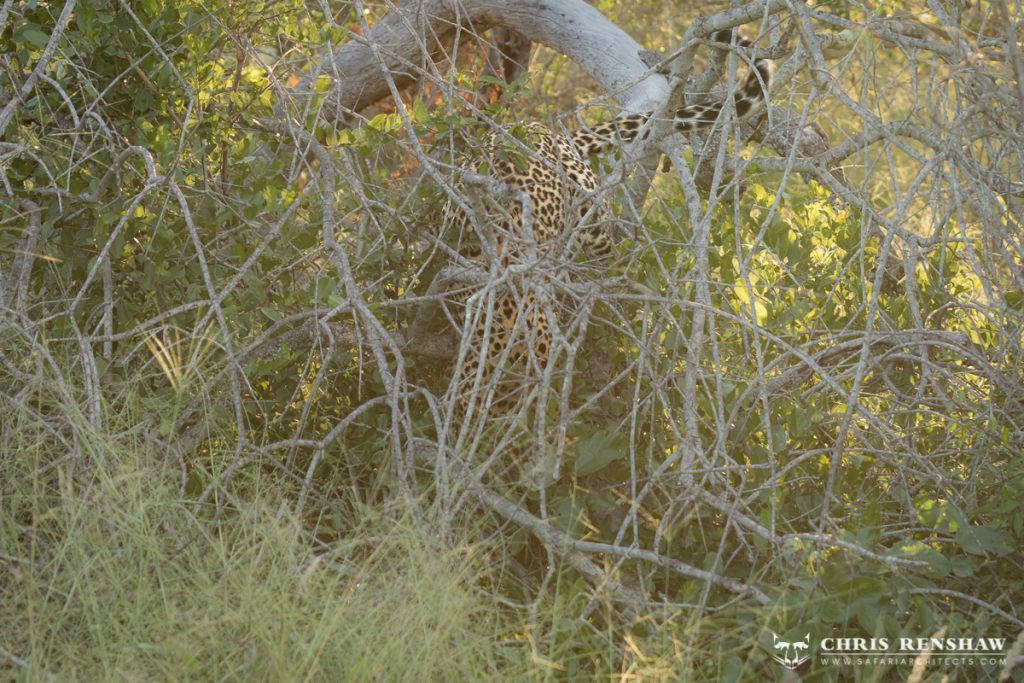 Like a red fox hunting in Snow, she dived head first into the thicket. 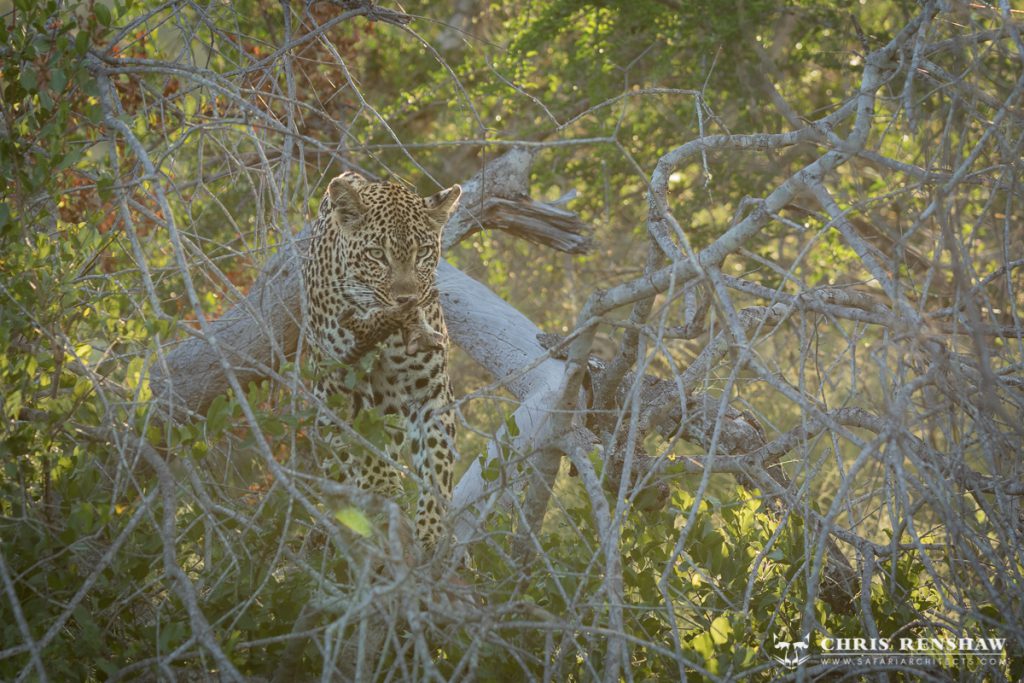 She emerged with the baby genet in her jaws. 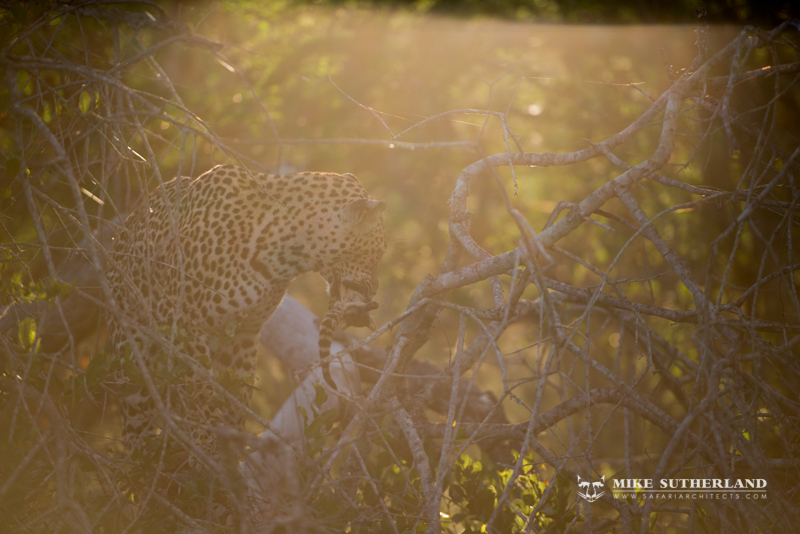 The small baby genet gets carried away quickly. 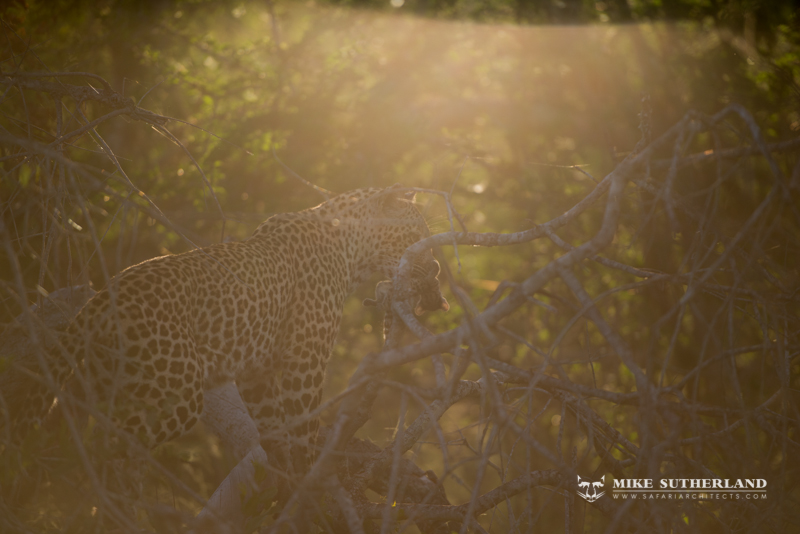 Without a sound, a squeal or an alarm.

She managed to free herself from the grips of the thorn-filled shrub, reversing to safety with her bounty hanging lifelessly between her teeth. Its mother in the tree above peered down, unemotional, realizing her loss but accepting that this is the way of the wild.

The leopard found a comfortable spot above the genet’s nest and began feeding. Within minutes the young genet had disappeared; forgotten like a distant memory, relived only through this story. 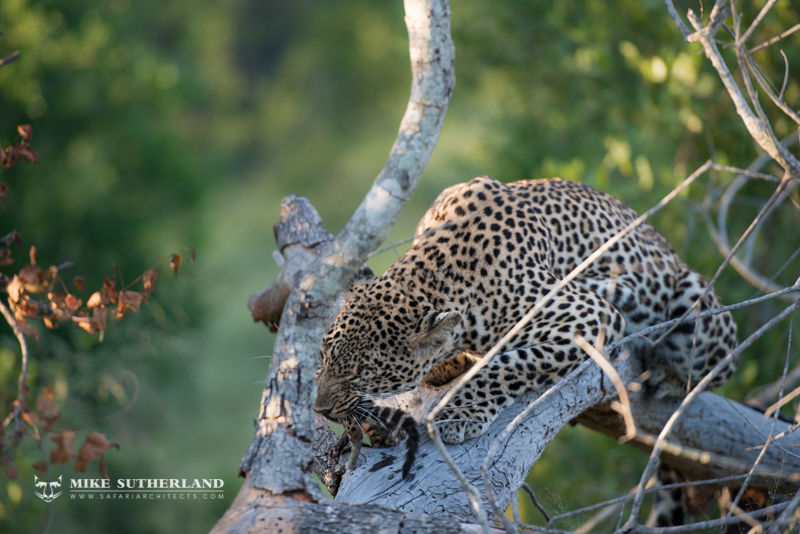 The leopard devours the poor genet. 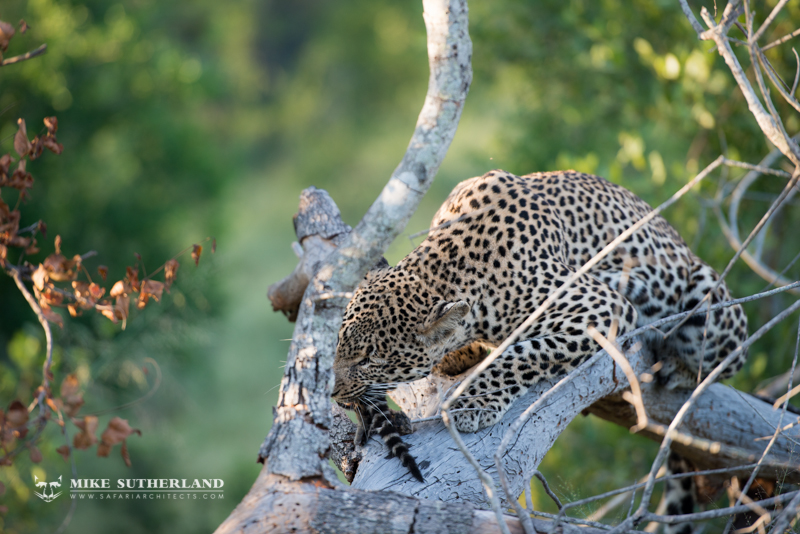 The last part of the tail disappeared before we could believe what we had witnessed. 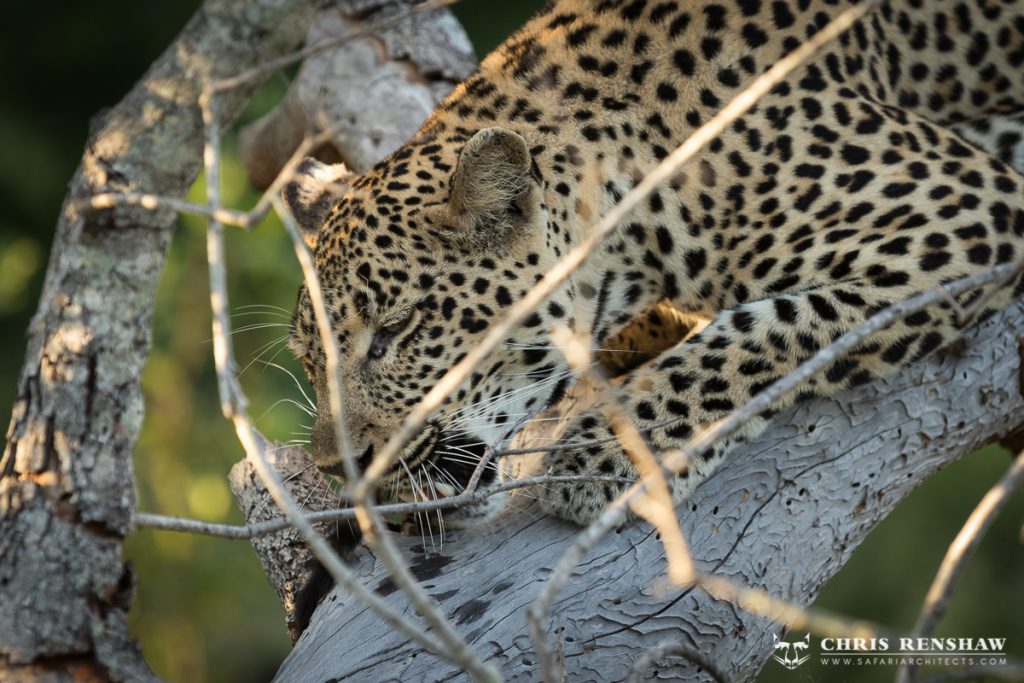 She made light work of the small meal.

Leopards are actually widely distributed around the world, but mainly found in Sub-Saharan Africa and parts of Asia. Their success is attributed largely to their ability of remaining elusive and moving unseen, even through the streets of Mumbai. Their prosperity is also due to their ability to feed on a wide variety prey. Currently in Africa, 94 different species have been recorded in their diet. Generally, about 60% of their diet in the Kruger National Park is Impala, but they also are known to feed on anything from rodents to hares and even large antelope. Being ever the opportunist, they will also eat birds, reptiles and on the odd occasion a baby genet.

This encounter opened our eyes to an interesting part of a leopard’s life with behavior seldom seen and if not documented, would potentially go unnoticed.

Watch this short video to see how the scene unfolded.

A week in the Linyanti and Okavango Delta

The grey giants of Africa