In between privately guiding and hosting multi country safaris, Chris found the time to lead and host a walking safari at Tanda Tula’s field camp. He says: “Walking safaris and being completely isolated in the African bush, really brings you to the core of what true wilderness can offer. The lack of external stimuli that we are so used to, forces the senses into picking up the real sounds, smells and nuances of nature. The natural light of fires and lanterns cast dancing shadows that mesmerise the soul and heal the wounds caused by the harsh reality of intense lifestyles”. The setup at Tanda Tula’s field camp is incredible, with comfort and luxury easily blending into the raw experience of sleeping out in the bush in a tented camp. Mike Sutherland, an associate guide of Safari Architects joined Chris for this walk and this is their story.

The first day began meeting excited and very keen guests. Settling into our new home, we met in time to do a short afternoon walk; in a beautiful woody tree area, in a private concession with minimal vehicle activity, that also runs alongside the Kruger National Park. It was the ideal spot to acclimatise guests to their new surroundings, gauge their walking speeds and introduce them to the wonders of the Lowveld. 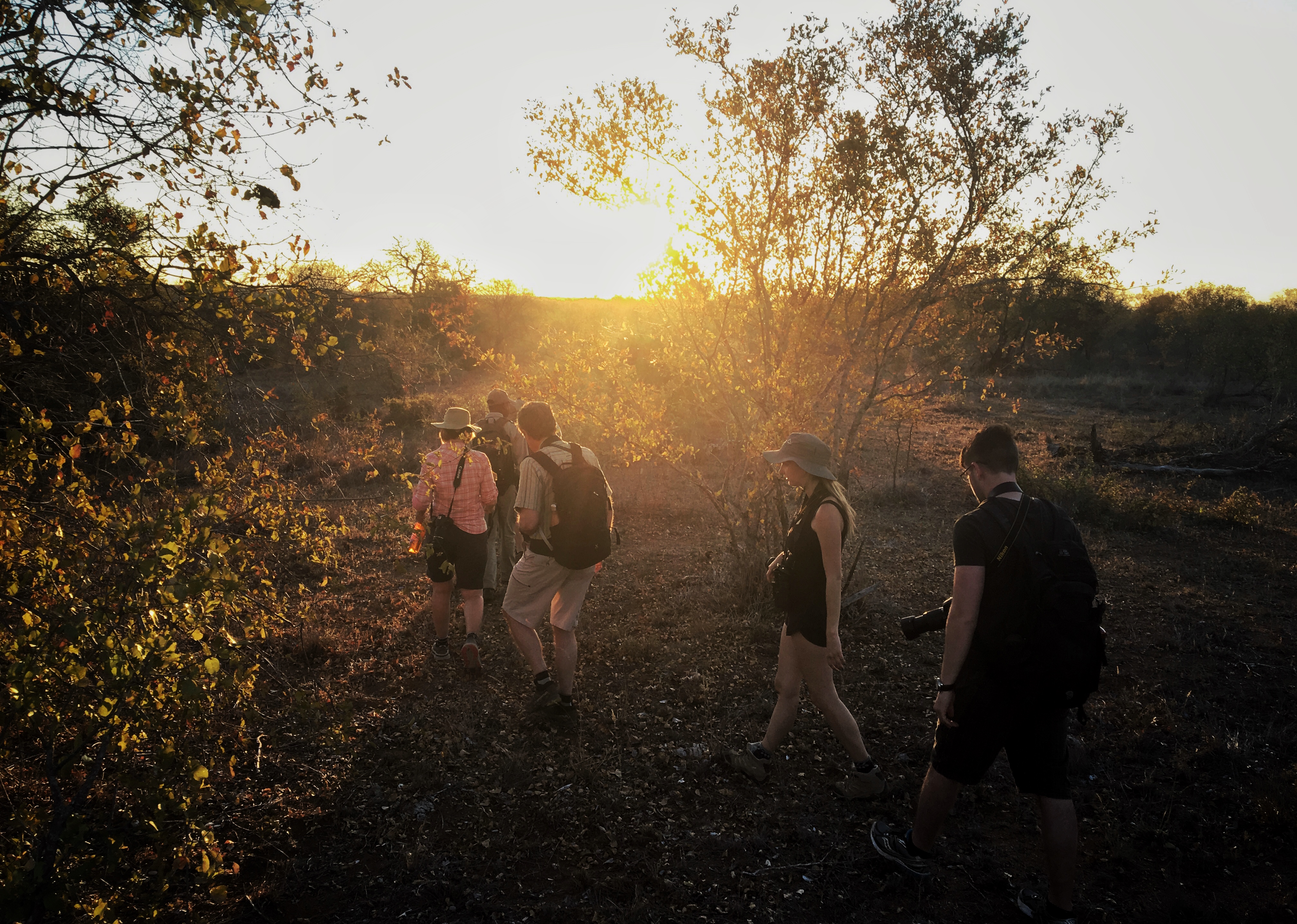 A magical sunset whilst walking back to camp. Image courtesy Mike Sutherland 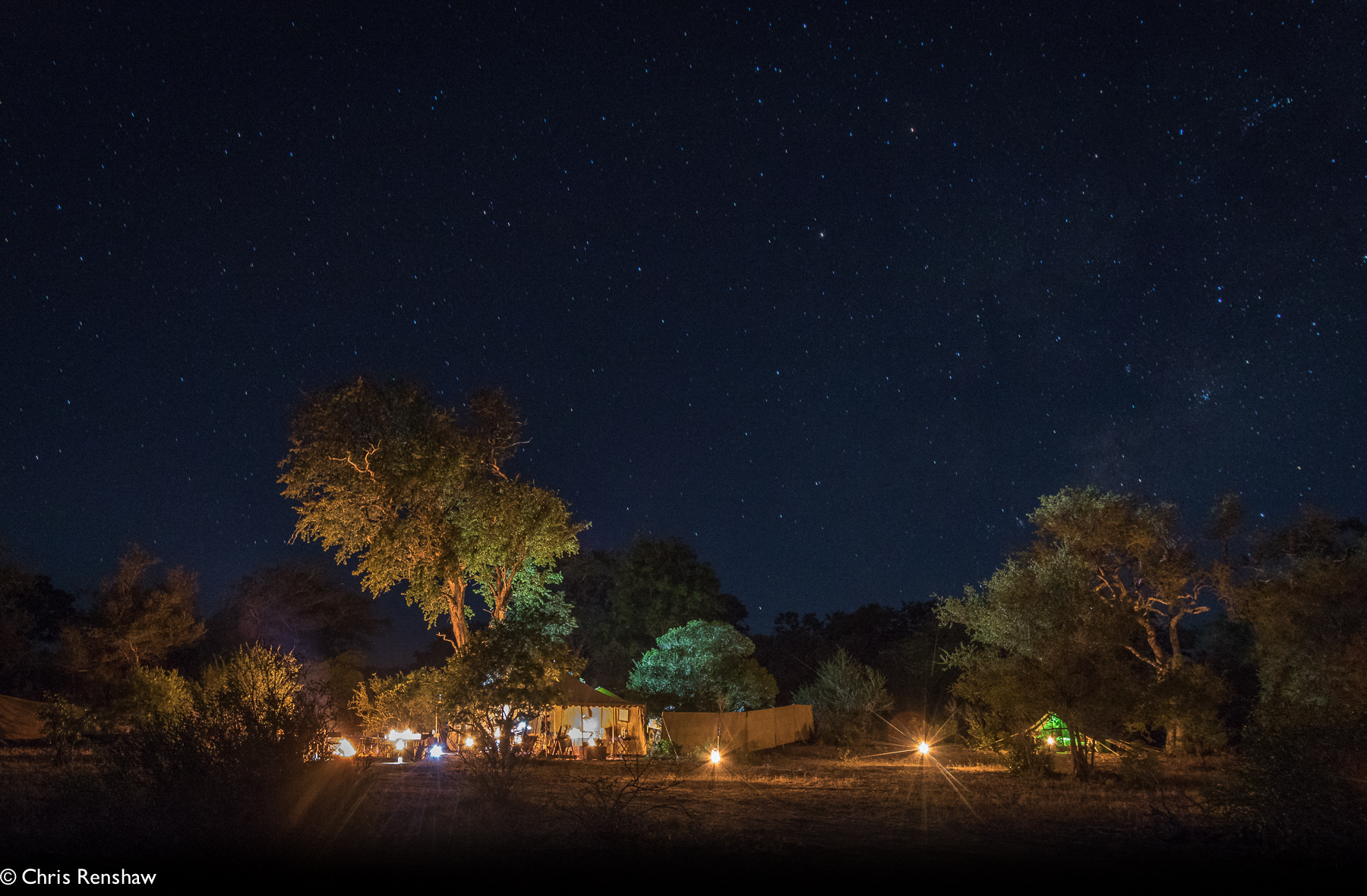 The Tanda Tula Field Camp under starlight was our home for 3 nights. 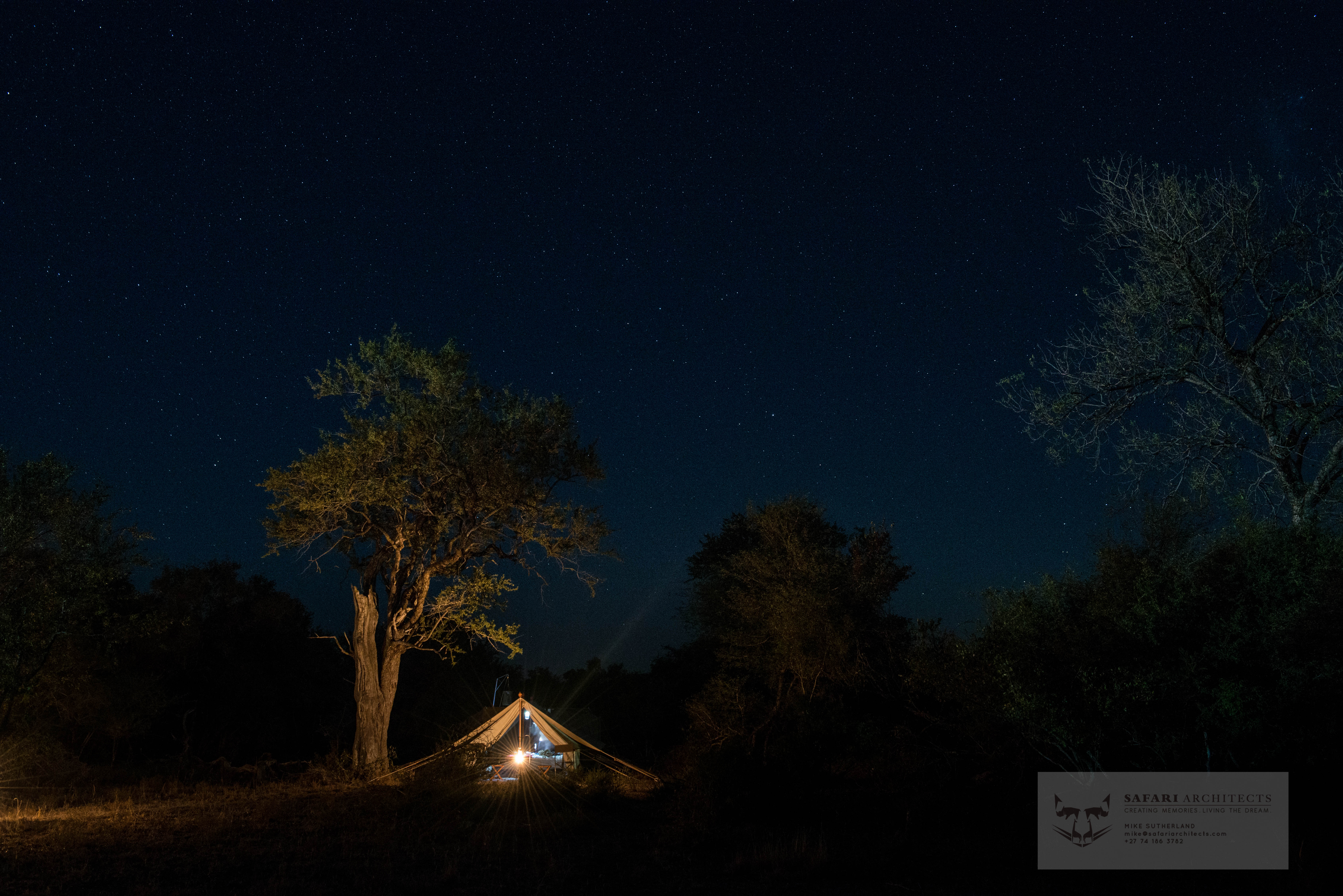 A colonial style canvas tent under the shade of a Leadwood tree by day, and the beautiful moonlight by night.

An early start the next morning saw all trail goers emerging from canvas tents with eager steps in anticipation for what the day was to bring. We walked straight from camp, planning on covering roughly 12 km. The goal for the day was to visit watering holes and to find any fresh animal tracks. The wind was a little blustery which despite what we thought, didn’t thwart any attempts at being able to track and view animals. Along the way, we were fortunate to come across several who stared straight back at us. The highlight of the morning was the encounter we had with two old buffalo bulls. Usually they are known for their cantankerous nature, but these two were reasonably relaxed. To be on the safer side however, we made sure we had a large body of water between us as we watched them drinking and having mud bath. 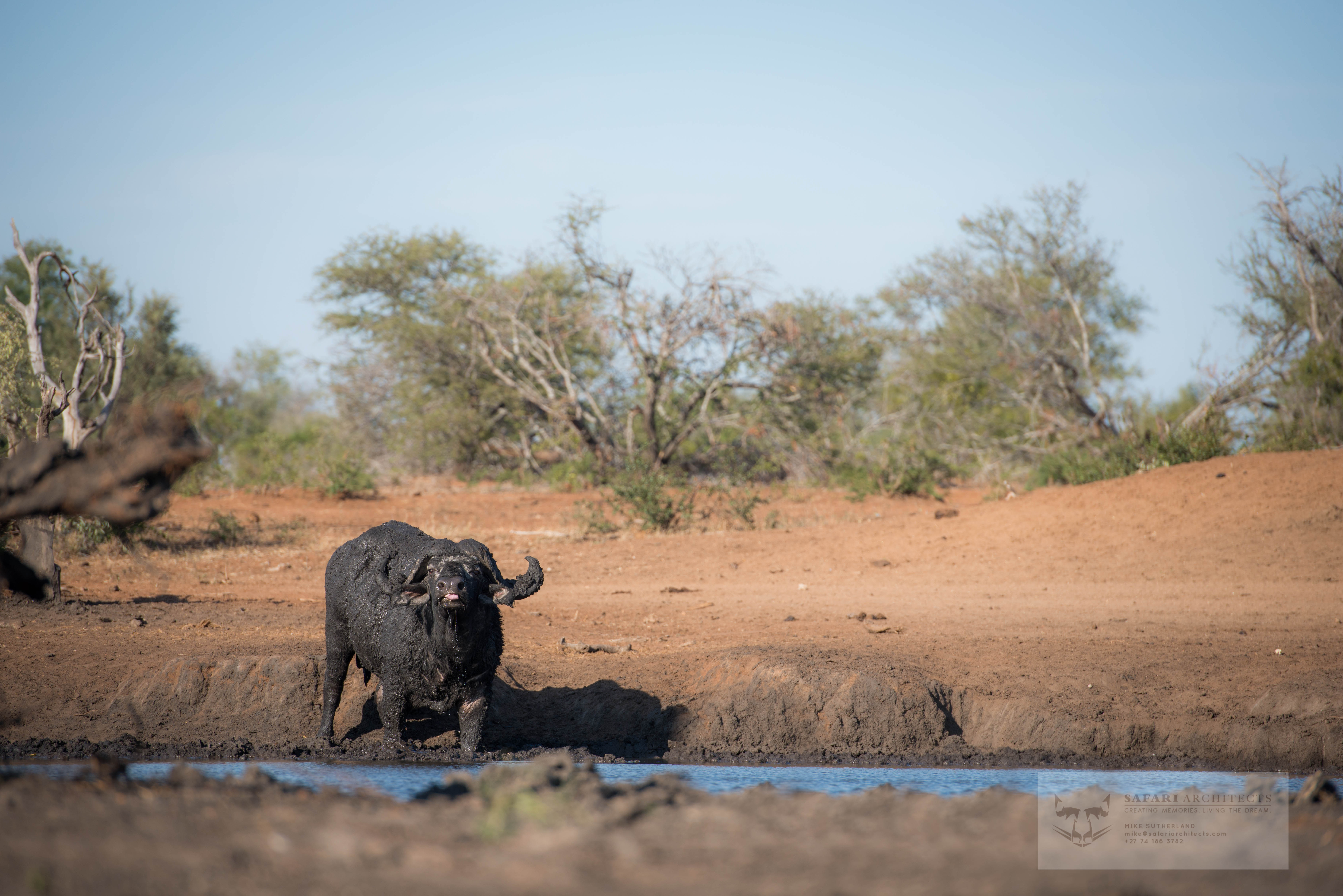 A buffalo bull monitors us cautiously as he has a drink.

After a delicious breakfast, we settled back into the camp to relax and enjoy the beautiful surroundings. At this point, a rather large elephant bull decided that he would join in. He proceeded to knock down a tree and feed on it in front of us. 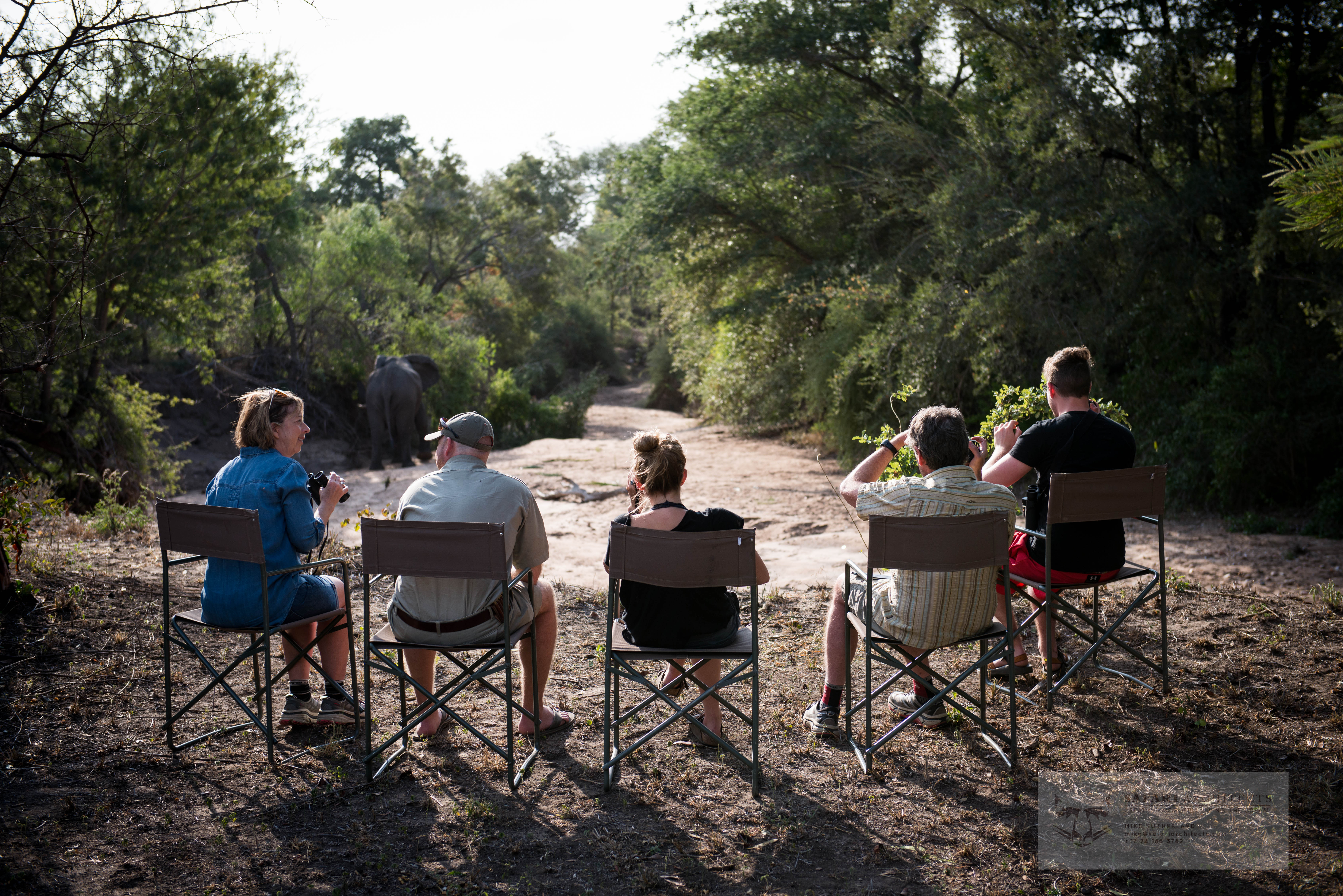 An enormous elephant bull decided to visit us at camp. Enjoying the midday downtime and watching an elephant.

In the afternoon, we went on a game drive. To make the most of weather conditions with howling winds, we stuck to the thickets much like the animals we were hoping to find. Our efforts proved successful when we came across a hunting leopardess. Leopards really enjoy blustery conditions, as it allows them to stalk and use the wind to their advantage. After initially attempting to take down a feisty warthog, she went off in search of more manageable prey. Suddenly and with some luck, she flushed a steenbok form its hiding place. In an incredible display of speed and agility; in a blur of spots and dust, she caught the unfortunate antelope right in front of us. The frantic fighting from the steenbok was to no avail. Evidence of nature at its most intense and raw. A sighting that we will most certainly never forget. 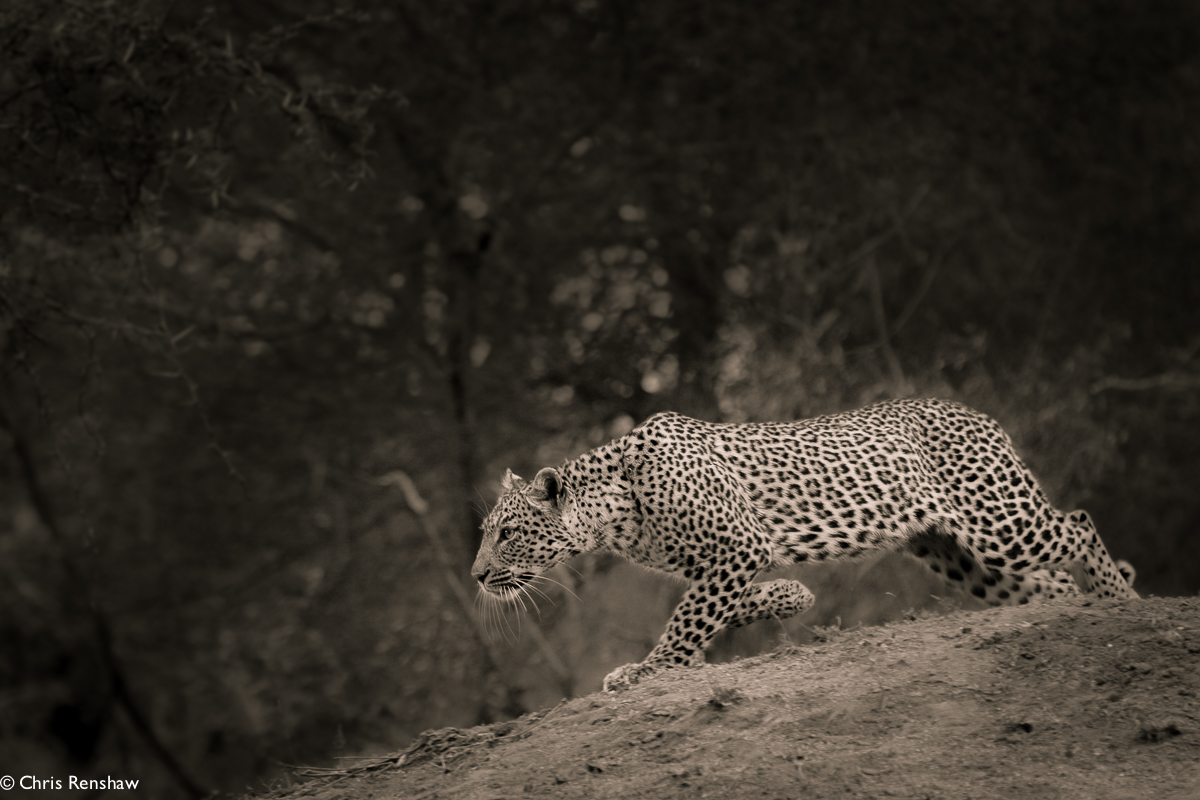 A leopardess descends a termite mound showing interest in something… 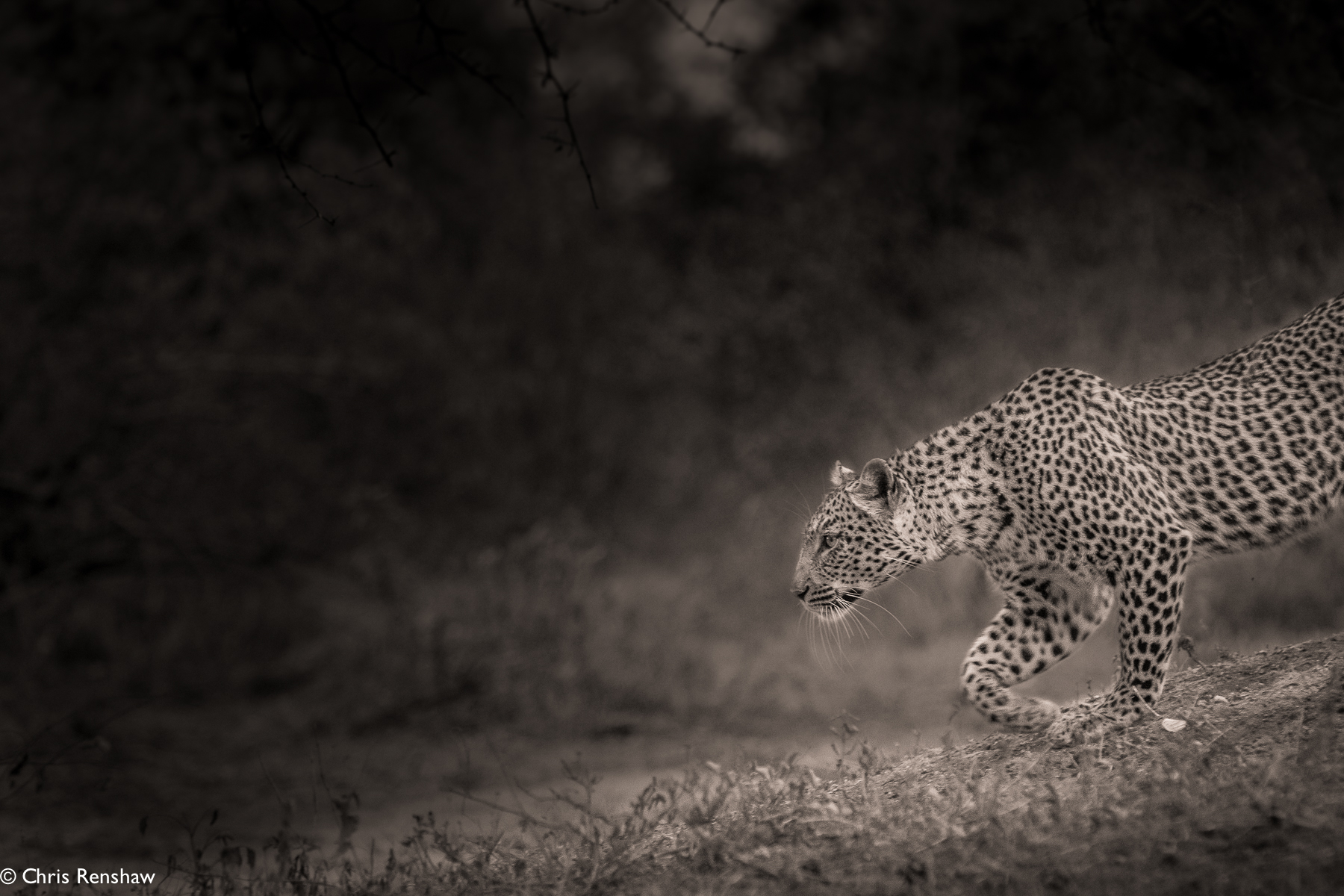 Intent on her quarry, she begins to stalk. 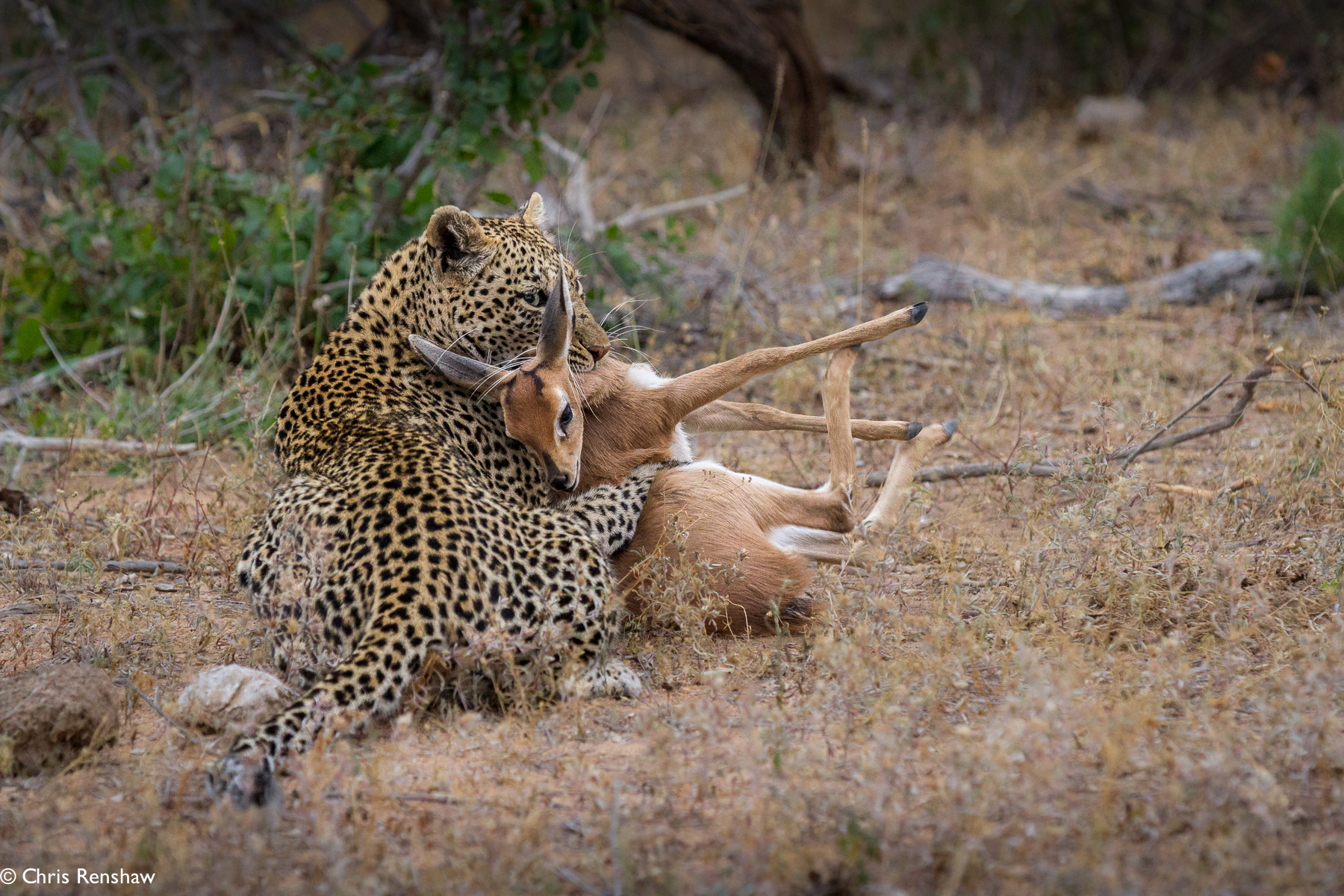 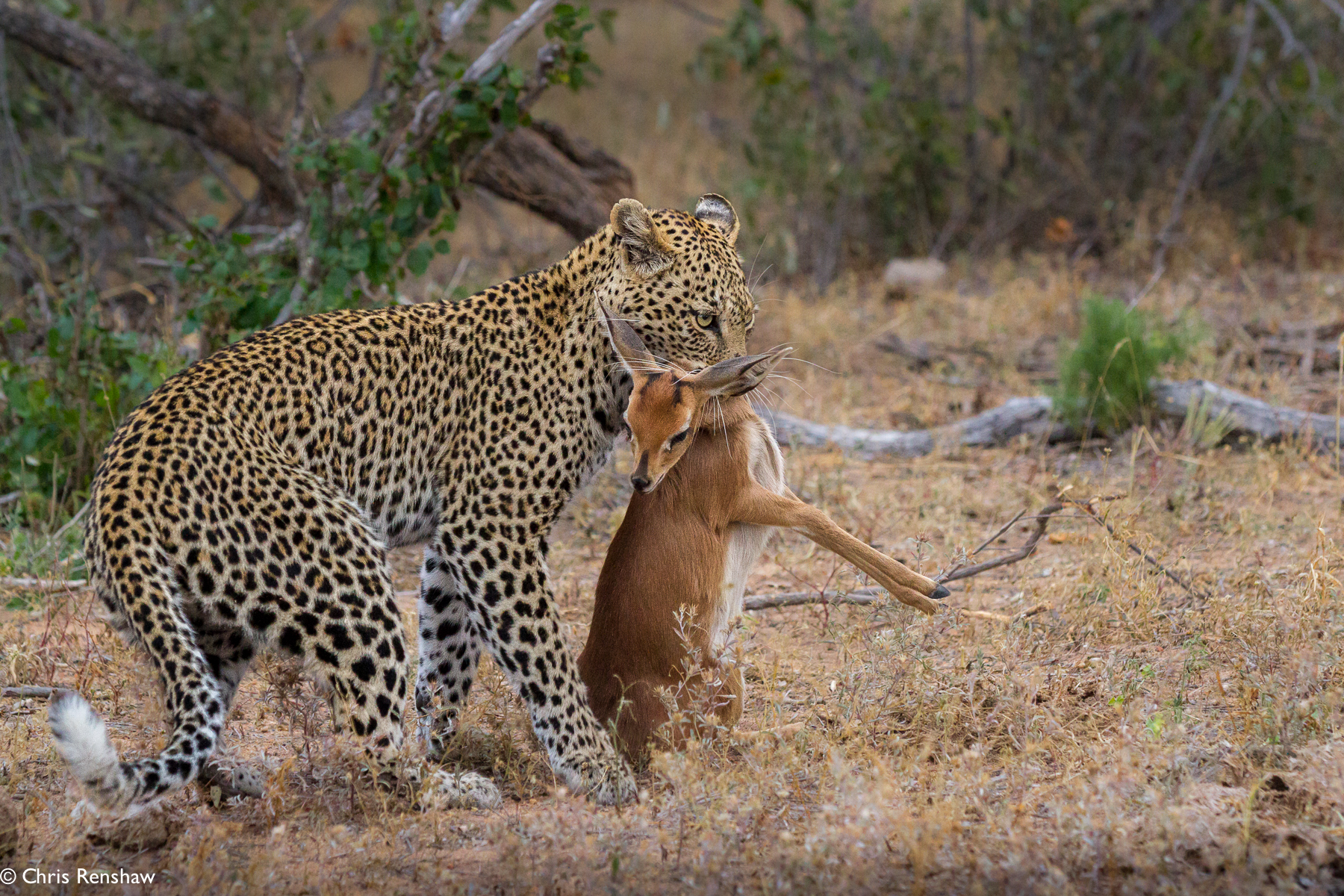 Once the poor antelope had succumbed to the throat hold, she lifts it effortlessly 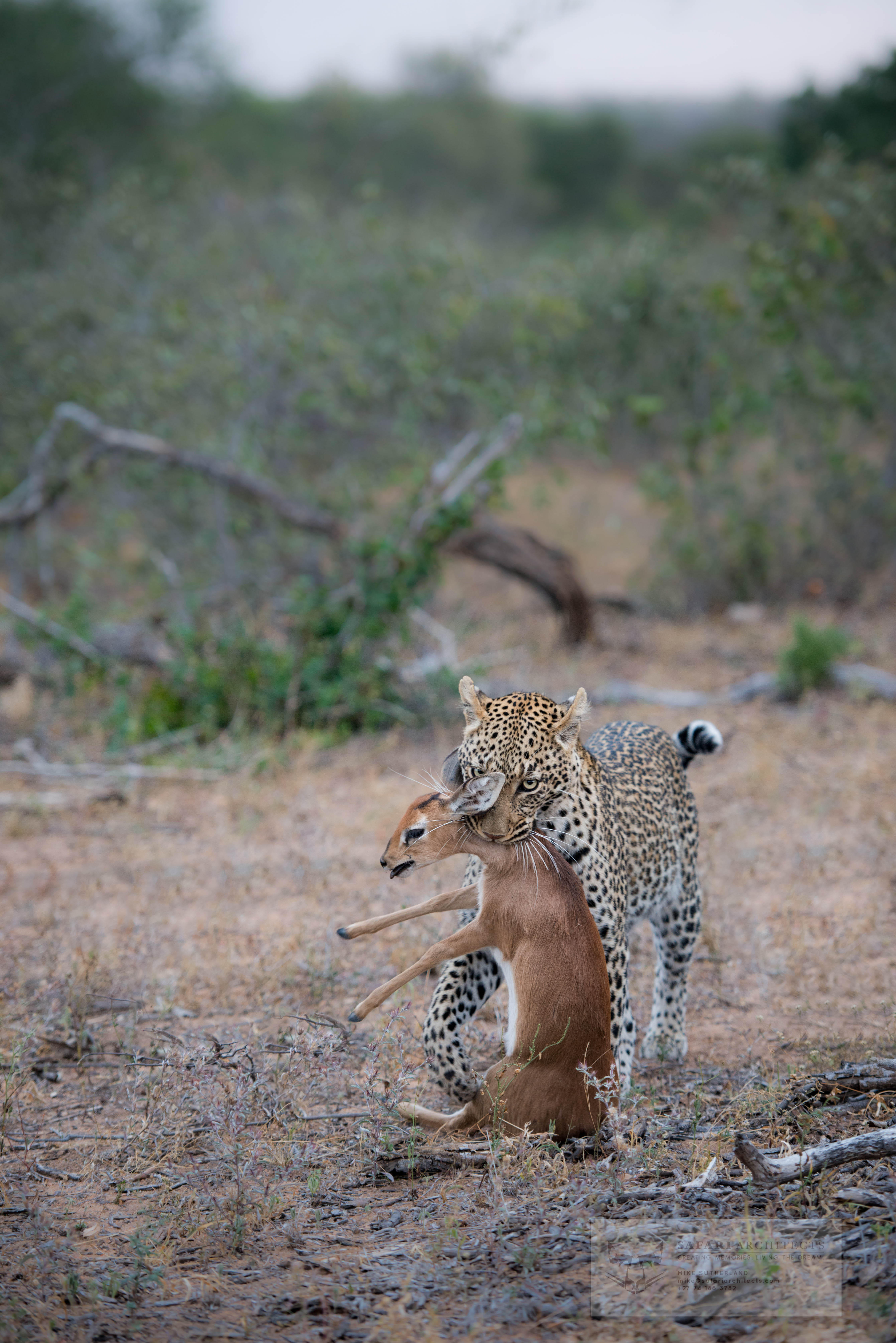 Dragging the carcass away, she heads to a nearby tree to store her meal. The kill safely stashed, she finally relaxes and surveys her terrirtory.

The weather improved the next morning so we headed out on another game drive and found the tracks of two male lions following the buffalo herd. Ensuring that the lions were not around, we followed the buffaloes’ tracks until we caught up with them. We viewed the herd from the safety of a dry river bed, without them knowing we were ever there. Starting a walk at sunrise, I can’t think of many better ways to start the day. Image courtesy Mike Sutherland 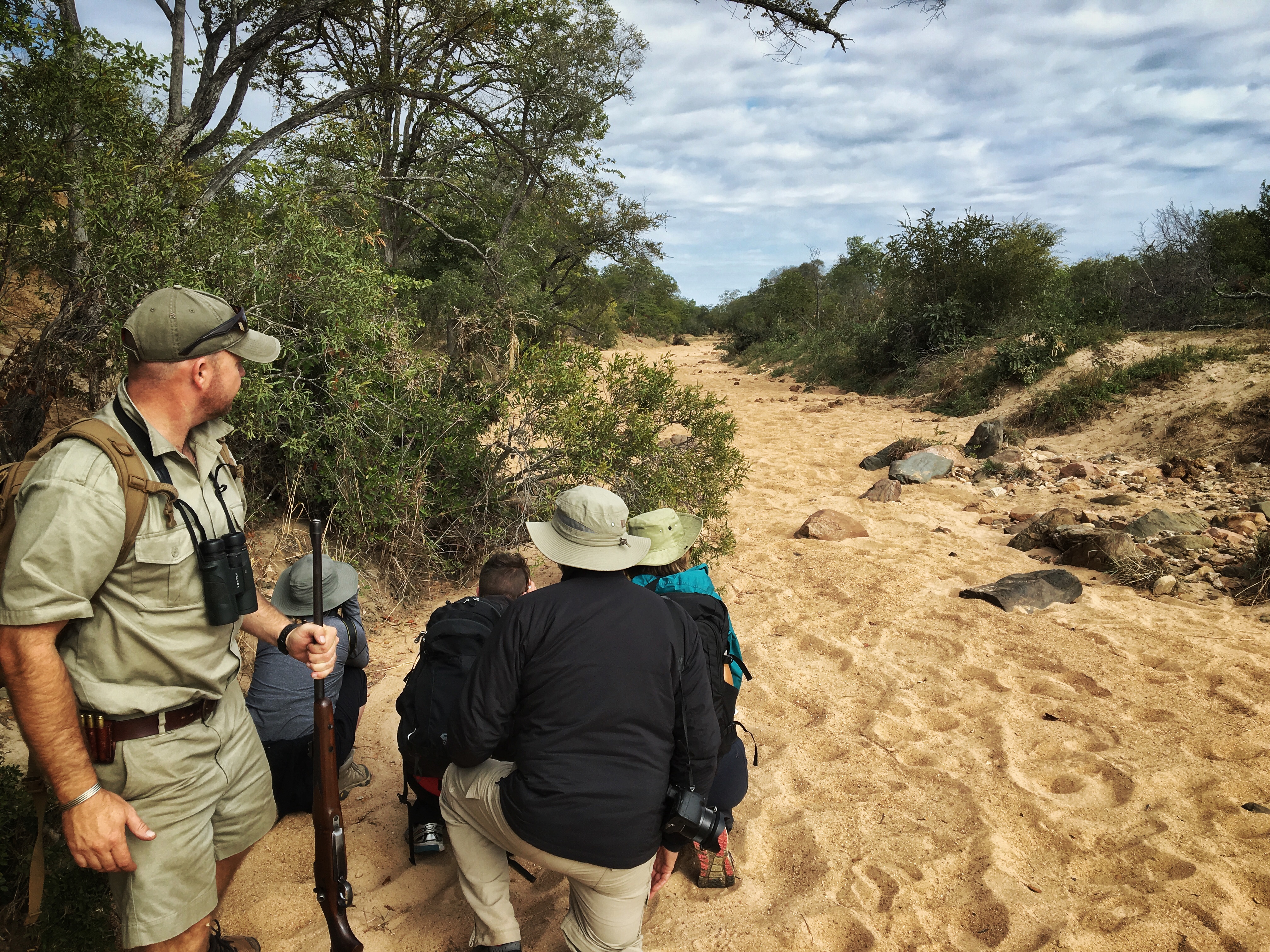 After tracking a buffalo herd, we watch in awe from the cover of a dry river bed. Image courtesy Mike Sutherland

In the afternoon, we ventured out again in the vehicle and focused this time on the smaller wonders of the African bush.  Later, we feasted on a scrumptious dinner before watching the mesmerising flames of our well built camp fire. 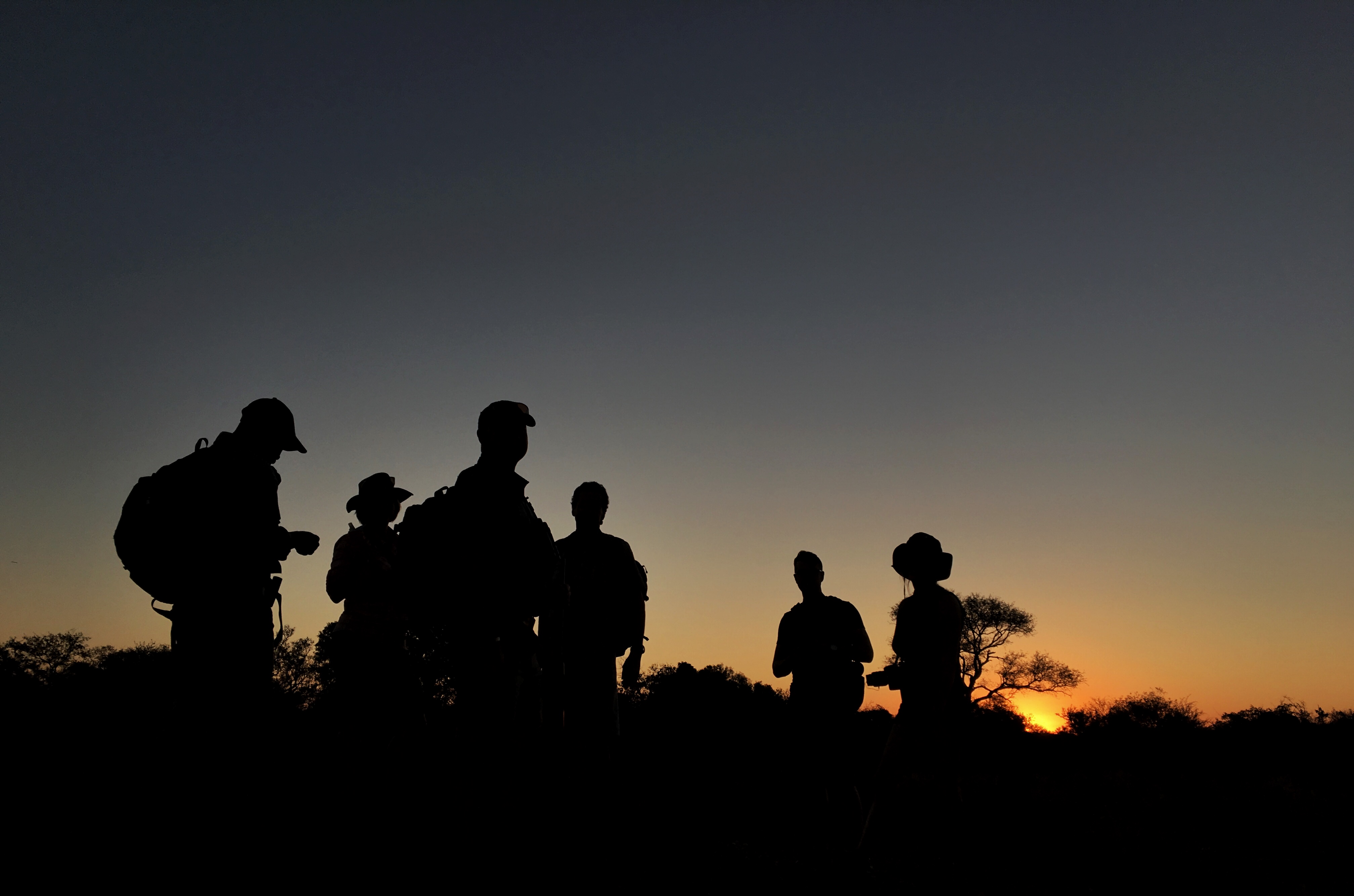 After a great day, there is nothing better than sitting around a fire under the stars. 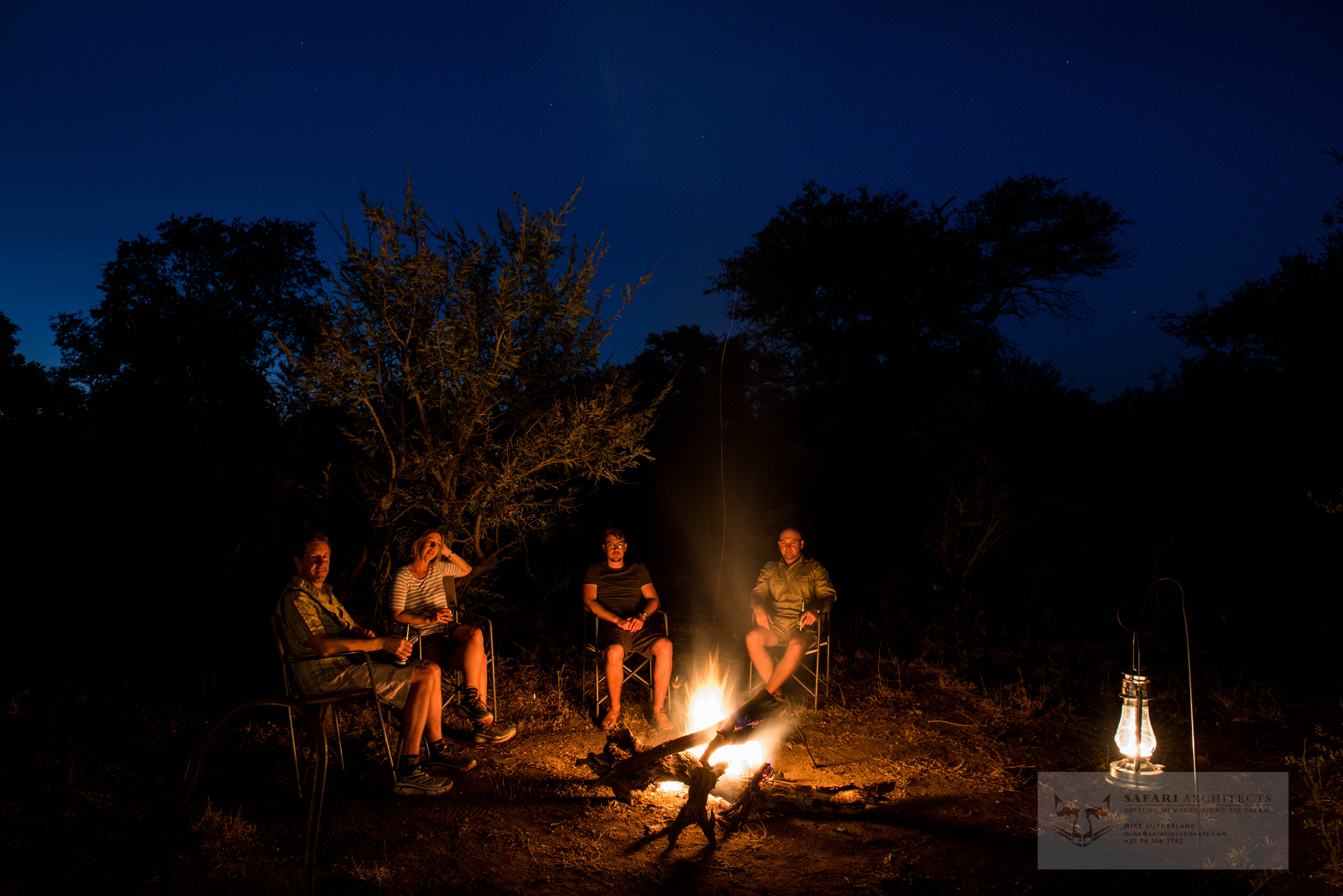 Hypnotic flames are made even more so with some proper story telling. 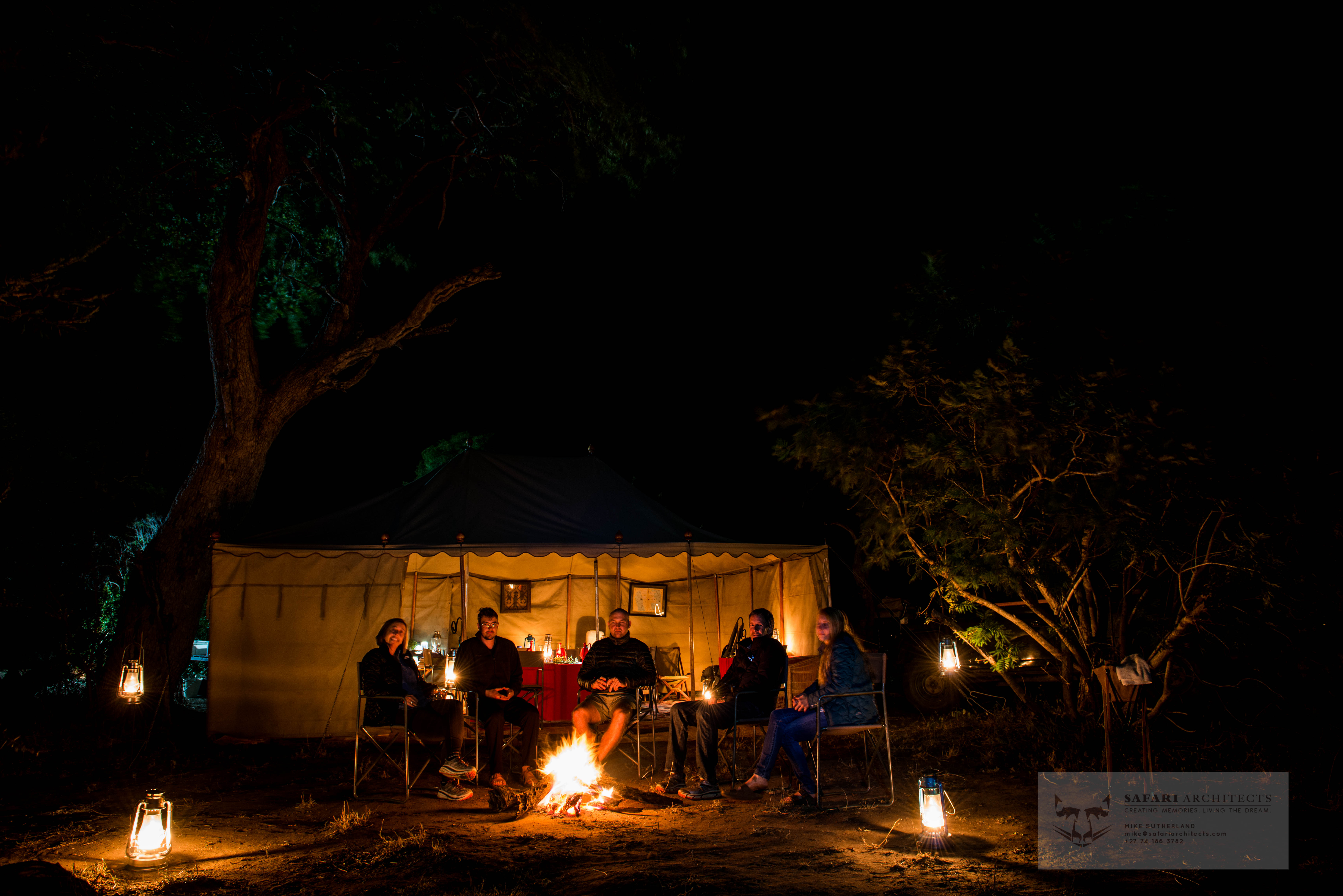 Our last night, talking about our experiences and walking encounters.

We had to end the trip with one final walk in the morning. Little did we know we’d stumble across something magical. After Ginger (tracker and fellow guide) found some fresh white rhinoceros tracks, we pursued. With the clock ticking we were pulling out all the stops to track the animal in time to catch up with it. After about two hours of tracking and just in the knick of time, Ginger clicked his fingers to alert us he had found him!!! What an experience to follow the footprints of a giant beast step for step and then finally observing him as he should be, in his own home. Unfortunately due to our proximity, we weren’t able to capture any photographs of this rare creature as we did not want to alert him to our presence. We watched him silently for some time  feeding, scent marking and doing what rhinos should. What a way to end…

Forests, Freedom, Friendships... and a Wedding