Sighting of a Lifetime

I often get asked by guests, “what is the best sighting you have ever had?’ This is difficult to answer as there are so many unique interactions that you witness on a safari, but being a big cat fan, one comes to mind!

We set out on an early morning safari from &Beyond Leadwood camp in the Sabi Sands aiming to catch up with the resident pride of lions.  My guests were also leopard mad, and if the opportunity presented itself, we would also see if we could track one down. Not far from camp, Isaac my tracker, pointed out fresh tracks of a pride of lions. On top of these tracks, were tracks for the resident Mapogo male lion coalition. Now, at this time the coalition had just taken over and as male lions do, they were tracking the Ximungwe pride to assert their dominance and unfortunately try to kill the cubs that were from the previous dominant male lion. A couple of hours later and hot on the trail, one of my colleagues had found the pride with a recent impala kill. None of the male lions were present, but the whole Ximungwe pride was present. With growls and grunts, the lionesses and cubs were feeding on the carcass. We quickly made our way down to the sighting, and what was in store for us, none of us could have imagined! 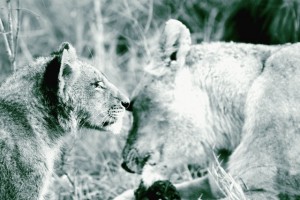 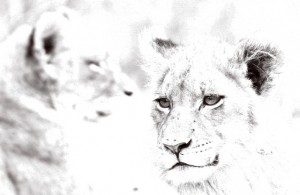 As soon as we arrived, we realised that everything was happening and chaos ensued. There were lions everywhere, growling, grunting and fighting over scraps. Added to the mix, 6 hyenas were sniping in to see what scraps they could get, with lions aggressively defending their carcass. Amazing interactions were going on everywhere, and in the chaos we had left out one crucial player…“Leopard!” Isaac shouted over the cacophony of primal choruses. We looked up, and nestled high in a Marula tree was a female leopard that had been chased up by there by the lions. We presume she had made the original kill, and the lions had come in and stolen it. Looking dishevelled and extremely uncomfortable, she could only sit and watch what was unfolding below her. 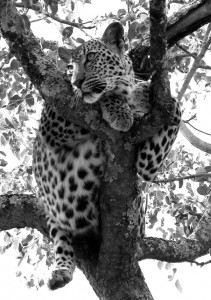 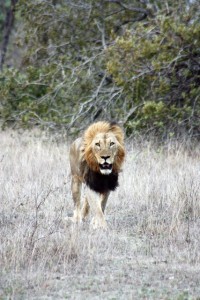 We were all speechless, and watched in awe what was taking place before our eyes. But, it was not over yet… Amid the chaos, deep roars penetrated the morning bush and everyone froze. Lions, hyenas, leopards and guests. The Mapogo males were coming! The lionesses realised the deep peril that their cubs were in, and tried to steer the youngsters away from the kill. It was not until four of the males came into sight, and were charging straight towards the cubs and the carcass, did the cubs realise what danger they were in. The pride scattered in all directions, with each male chasing whichever member of the pride that was closest. The males were bellowing and roaring their dominance, and the pride scattered, petrified. Even the hyenas who are the opportunist of the predator world decided this was one battle that they were not going to be a part of, skulked off into the bush. The female leopard who was still clinging to branches way up in the Marula tree knew that this was her chance to get away. With a death defying leap that only a cat can survive, she jumped and soared through the air. She landed twenty meters from the closest male lion, and dashed off at top speed to put as much distance between herself and the ensuing battle.
For the next twenty minutes, we tried to keep up with what was going on, following roars of males and petrified cubs.