This week we chat to Josh van der Ploeg! Josh is an expert safari guide and has collected many wonderful stories from the African wilderness over the years. His travels also took him as far as Saudi Arabia, in search of the elusive and mysterious Arabian leopard… Read more about Josh and his safari stories below! 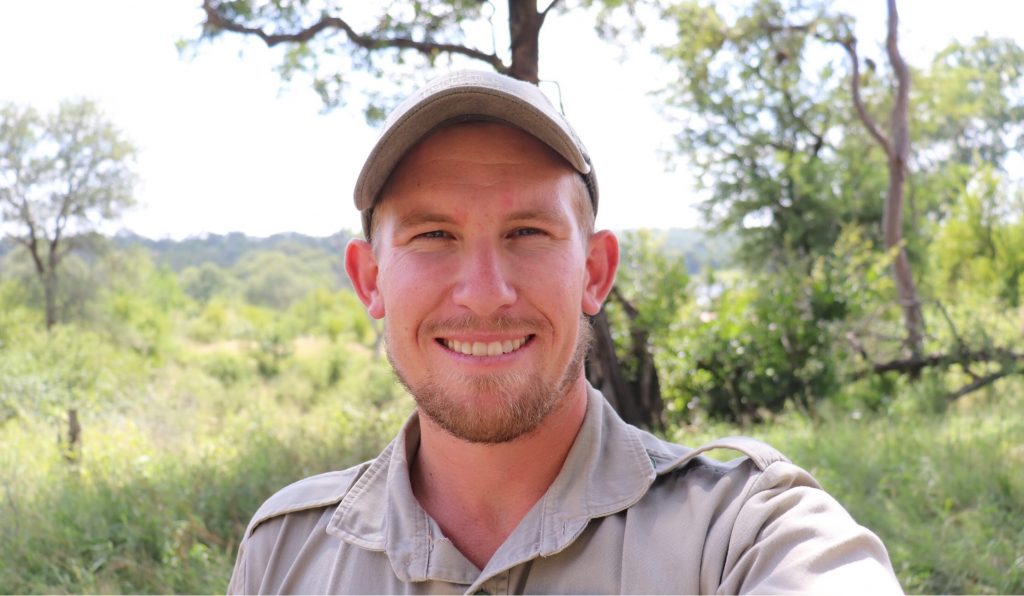 Safari Architects: Where did you grow up and how did you get interested in the African bushveld?

Josh VDP: I grew up in Cape Town and my family and I would often drive up to the Kruger Park for around two weeks at a time. We would stop in Johannesburg to pick up my grandparents in our big combi and then would head into the park! That was really my first introduction to the safari world. Throughout my university career I also did a lot of field work in different reserves throughout South Africa. Getting to spend that time in nature was something that really motivated my life choices. A friend of mine was doing some really great stuff with andBeyond and he put me in touch with them. I managed to get onto their training course and once I completed it, I actually ended up in the Sabi Sands. By that point I had finished my Degree and got caught up in the industry (in a good way). I worked in the Sabi Sands for 4 and a half years. There is a big difference between scientific work and hands-on work out in the field, and I really enjoyed the opportunity to spend plenty of time in the field. I found that working as a guide gave me a chance to see animals and things which I wouldn’t have if I had continued to pursue a career in academics. When you study them, you may not be able to have the same kind of experiences. 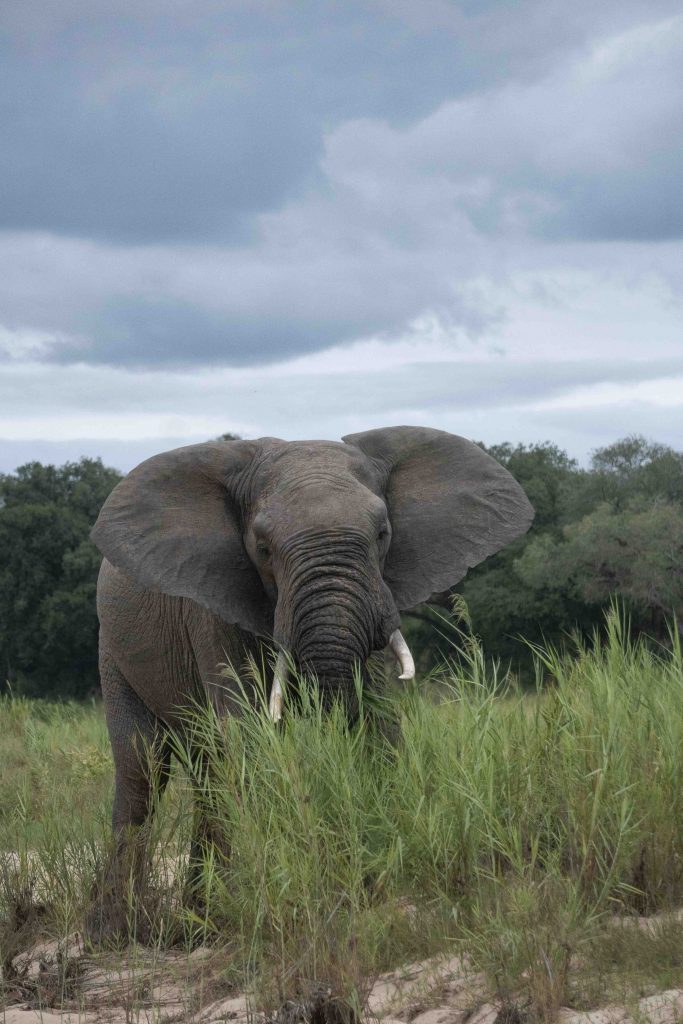 Safari Architects: Tell us about the training course at AndBeyond?

Josh VDP: The training course that andBeyond offers is 6 weeks long and is basically an introduction to guiding i.e., a FGASA qualification and then the basics of guiding. There is a little bit of wilderness first aid, car information, and then the latter part of the course was actual guiding. They really just put you into it and see what you can do. However, it isn’t all knowledge-based, there is no pressure to know everything, it’s more about who you are as a person. After the training I was then placed in the Sabi Sands, where I then completed another month and a half to two months of training before I started hosting guests.

Safari Architects: Do you remember your first guests and what was the experience like? Did you feel ready?

Josh VDP: I remember my first guests were a wonderful family from Singapore; mom, daughter, son and daughter’s partner. We had an incredible sighting of a leopard with her kill in aJackalberry tree which will stay with me forever as a special part of my first guiding experience. After that I guided a family from Canada who actually came back and were my guests again two years later. 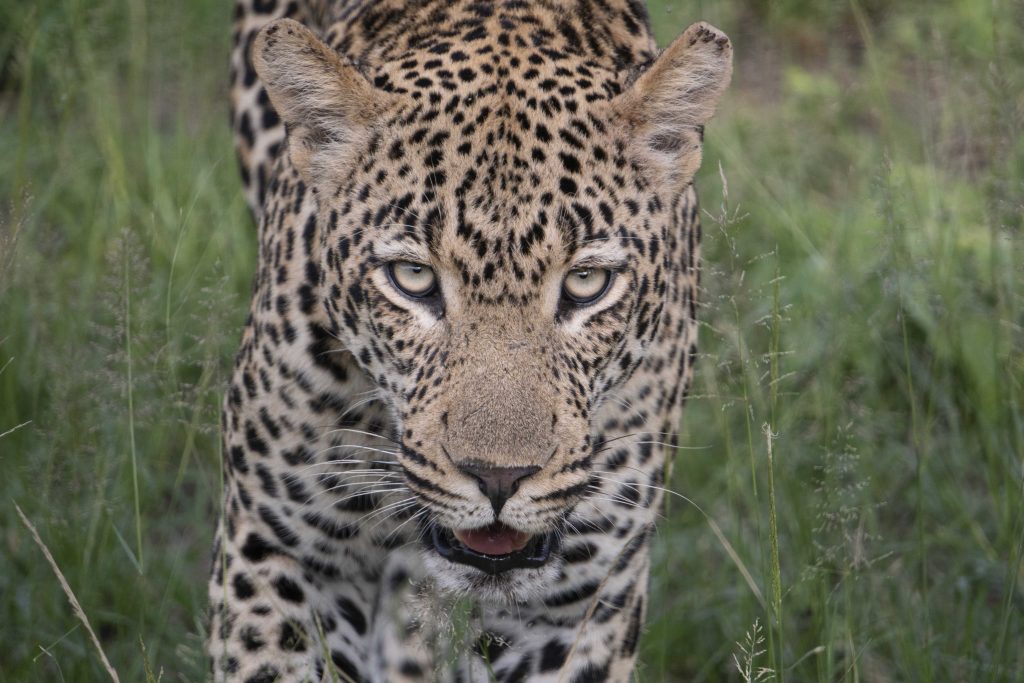 Safari Architects: It must be great to be able to build a relationship with guests where you get to know them personally and remember details about their first safari to make their next one all the more special

Josh VDP: Yes exactly, they all remembered individual lions and leopards from their first safari which means that you get to ‘complete the story’ in a sense on their next safari. For example, they will remember particular animals and when they see them again some will have cubs now, some will be dominant males etc. They get to see where they are then and now. That’s also the great thing about the Sabi Sands, there is such a richness of wildlife that you can identify and follow up on certain local animals.

Safari Architects: What was your process of getting into photography like?

Josh VDP: I got photography advice from a good friend of mine Matt who told me which camera to get. I got myself a decent camera but at that point I still didn’t know how to take a proper picture or how to edit. One day Matt and I were both going to the same sighting. The vegetation was very dense; one of us was going to see the back of the animal and one of us was going to see the front! All of a sudden, I saw a female leopard walking toward me with her cub in her mouth. Now at this point I had only had my camera for two months, so needless to say the pictures came out ok, but I had to ask Matt to help me edit the pictures which I felt a little bad about! It was all in good fun, but it is certainly competitive in the photographic world of guiding! At the end of the day though we were just happy that all our guests got to see such a wonderful sighting. 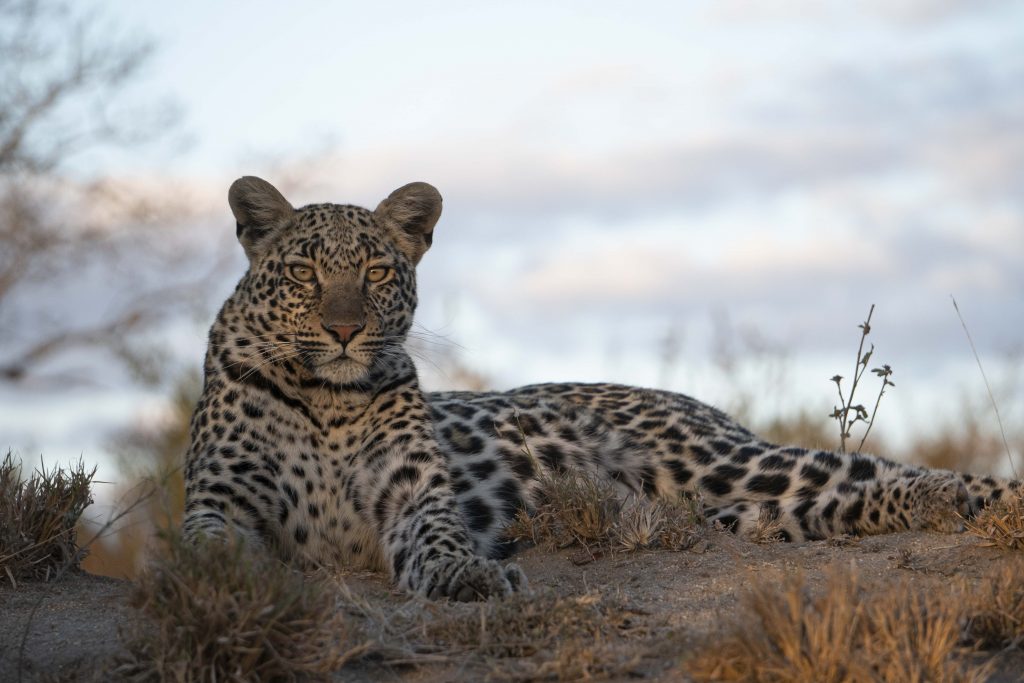 Safari Architects: How did you hear about the opportunity with Panthera to set up camera traps in Saudi Arabia in hopes of capturing images of the Arabian leopard?

Josh VDP: So, when I studied at the University of Cape Town Panthera had a lab there, that’s where their academic offices are. They run one of the most long-running data projects in the Sabi Sands where they use software to records sightings. They are able to capture incredible data such as which leopards are spending time together, where they are traversing, what they are eating etc. Some of the scientists form Panthera make regular trips out to the Sabi Sands and I interacted with them a couple of times. I then got a call from them out of the blue asking if I would be interested in assisting in Saudi Arabia! I had just left guiding so the timing was perfect, so I packed up and went off to join them in their search for the Arabian leopard.

Safari Architects: What was your daily routine like working on this project?

Josh VDP: There were a few areas which were quite remote, we were operating in mountain ranges along the Arabian Peninsula. It a very long mountain range which runs from north to south and we were walking and working in those mountains. Most of the time the most efficient way to set up camera stations was to stay outside of the mountains and drive in each day; we could set up 3-4 camera stations a day like that. For the more remote spots we would camp for around 2-3 nights and spend the days hiking through the mountains looking for the best places to set up the camera traps. It was an incredible experience! 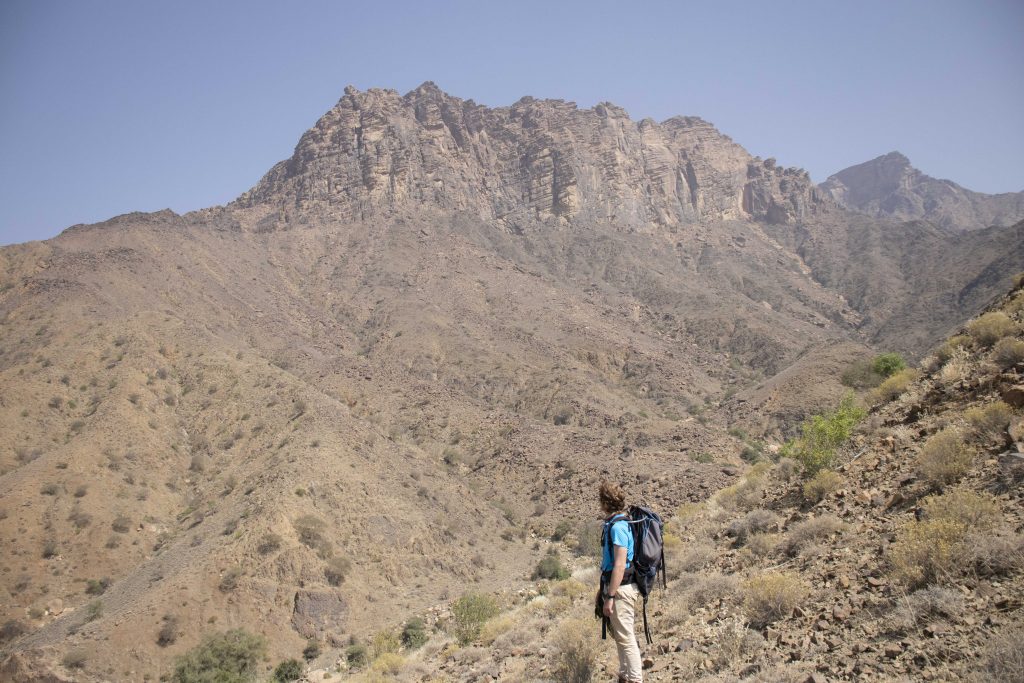 Safari Architects: What is one of your most memorable experiences in the bush?

Josh VDP: Perhaps some of my favourite memories and stories are those of times spent tracking animals with Jerry, my work partner whilst I was in the Sabi Sands. Jerry is a professional tracker, and we worked together for 4 and a half years. By the time I left the Sabi Sands, Jerry had been working in the area for over 20 years, so he had plenty of skills and experience to share.

I fondly remember a particular morning when we were exploring the slightly remote areas of our concession, near the boundary with the Kruger National Park. There are no fences separating the Sabi Sands and the Kruger National Park, which allows animals to come and go as they please; we were taking a chance and looking for a pride of lions which no one had seen in almost 2 years. The pride had moved into the Kruger as new dominant males took over, and we had heard that the pride had grown to 18 lions, so finding them to be back on our concession one day was an exciting prospect.

As we were driving along the road which hugs the banks of the Sand River, Jerry suddenly stopped me and hopped off the vehicle. He pointed out a few lion tracks and we realized that the sandy road was just covered with paw prints from lions of different sizes. With anticipation mounting, we began following the tracks on foot. It was clear that there were lionesses, cubs, subadults, and large male lions in the pride; all we had to do was find them.

After about 10 minutes, we crested a blind rise whilst walking along a game trail and suddenly Jerry grabbed my arm. He quietly pointed ahead of us, and I saw the back of a male lion melting into the vegetation about 50 feet away. We had them. 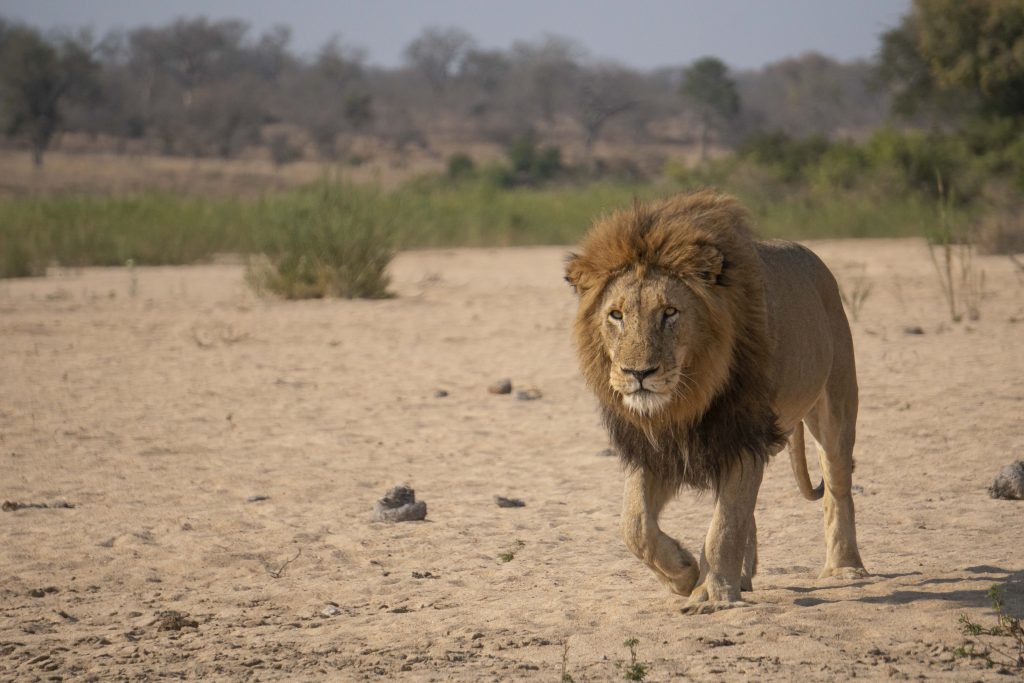 Presuming the male lion was following the rest of the pride, we immediately walked back to our vehicle where our guests were waiting safely and patiently for our return. I say “walked back” but I think I was jogging with excitement. We had just had a glimpse of what could be a lion from the largest pride I was to ever see!

We fetched our guests and sped back to where we had seen the lion. Nothing. However, as I turned the vehicle off, Jerry immediately pointed at his ear indicating that I needed to be quiet and listen. We heard an intense explosion of growling just ahead of us behind a wall of trees. Jerry motioned excitedly as I switched the engine on and drove as conservatively as I could to get around the thicket. As we rounded the thicket and drove down into a dry riverbed, we found them. 4 Males lions, 4 lionesses, and 12 youngsters, all fighting over the remains of an impala which they must have caught moments earlier

It was the first time the pride had been seen in almost 2 years, and Jerry and I had found them. 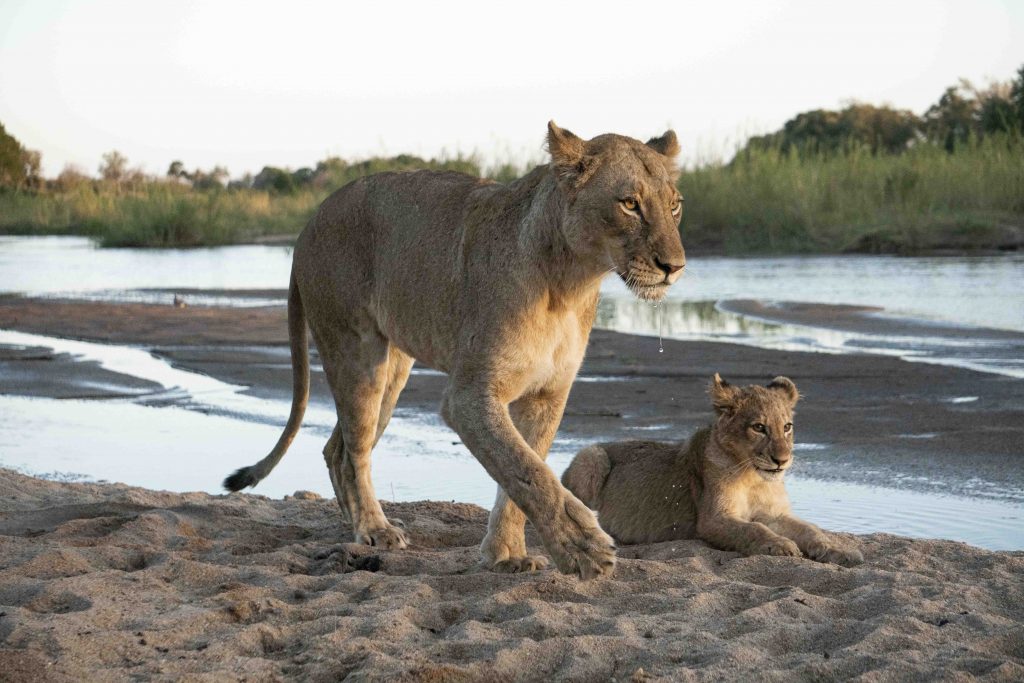 A queen and her cub

The Beauty & The East