The Super Mom of the Kalahari

When we read books about lions, books that have taken months and years to compile using research painstakingly conducted over generations, we still don’t often come across stories about these incredible beasts like the one I am going to describe here. 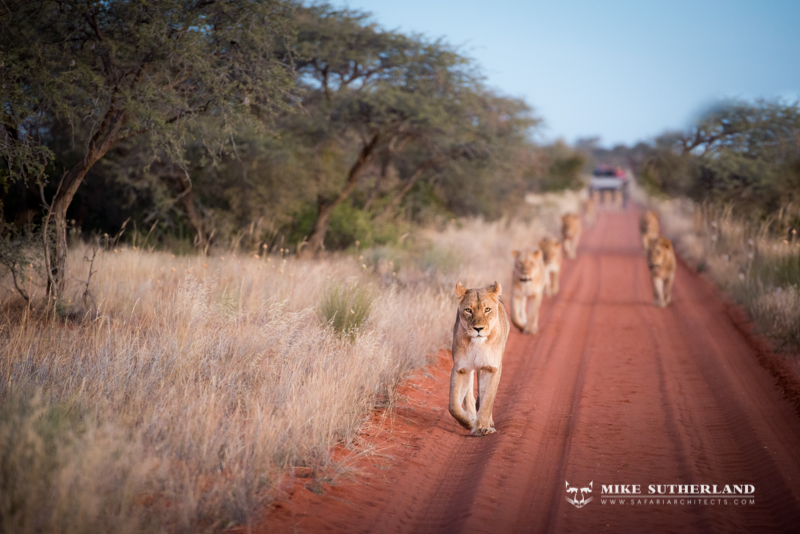 When we read about lions, we are told that on average they will give birth to approximately 2-4 litters and seldom more than that. A healthy lioness in the prime of her life, will usually have around 4 cubs in a litter, whilst older lionesses generally have less. Most lion prides consist of more than one lioness, and these females are often related to one another as mother, daughter, sister or cousin.

It is also well documented that mature enough lionesses in a pride will synchronise their oestrus cycles, breeding and birthing in order to have cubs simultaneously. In so doing, the survival rate of all cubs becomes greater. Interestingly, females in the pride will readily treat all similar aged cubs as their own. They will groom, look after and even nurse cubs that belong to their sister, cousin, mother, aunt or grandmother as they would their own.

Currently, in the southern parts of the Kalahari’s semi-arid desert, (often referred to as the “Green Kalahari”) lies a special tract of land known as Tswalu Kalahari Reserve. This is the largest privately owned wilderness area in South Africa and it is here, that a magical story is currently unfolding.

The area is home to a resident pride of lions consisting of 3 adult lionesses and their sub-adult offspring. Late in 2016, the sub-adults, were naturally forced to leave their birth territory and create their own future in other parts of the reserve. Of the 3 remaining females – an elderly lion has begun to spend a lot of her time on her own leaving the remaining 2 adult lionesses, to continue the prides legacy. 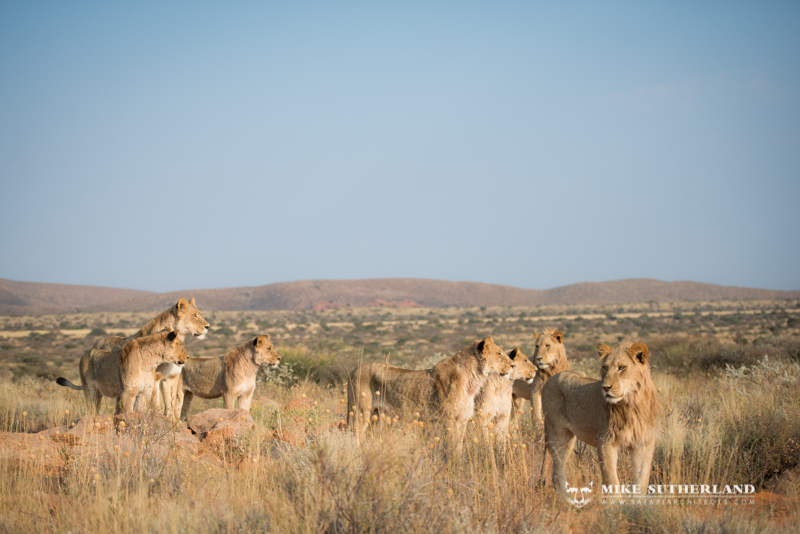 One of the last occasions that these lions were all seen together before the sub-adults were forced to leave their mothers.

Soon after the sub-adults left their mothers, the lionesses showed signs of pregnancy and in September of 2016, welcomed new cubs into the world. Each lioness had her own litter, 4 to one lioness and 3 to the other. It was a remarkable time and I was fortunate enough to be there to witness the cubs, in their den, nursing from their mothers.

Fast forward 4 months and disaster strikes. The budding young pride was faced with a terrible dilemma when one of the adult lionesses tragically passed away. Her death came as a great loss to the pride and more importantly to the small cubs she left behind. At the time of her death, her cubs were still being weaned and were certainly not able to fend for themselves yet. This left the last remaining lioness with a high burden, to take on the role of surrogate mother to the orphaned cubs in addition to sustaining the lives of her own litter. Seven hungry mouths to feed on her own, in a vast unforgiving wilderness. 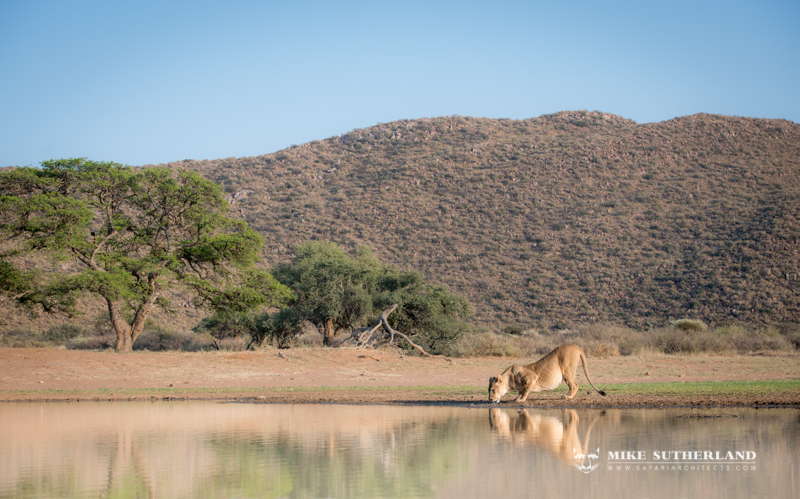 The last remaining lioness had been left with the task of raising a litter of 7 on her own.

Having been away from Tswalu for a period, I had no idea how this extraordinary lioness and her “double litter” were doing. So when I returned to Tswalu recently to do some private guiding, I really wanted to see for myself and spent hours searching high and low for the pride in the mountains and hills. Eventually we managed to find them early one morning. It was such a special sighting to witness this incredible lion interacting with her astonishing  family.

They had been feeding on a kill somewhere close by and were on their way to a watering hole to quench their thirst. Slowly all the lions filtered out onto the road, and one by one we counted… All 7 had survived and flourished! 7 healthy, beautiful lion cubs, with their superhero mom/surrogate mom, leading them to water. It is was a moment that will stick with me for many years to come and thankfully we have the pictures and videos to remind us. We will watch eagerly from the sidelines as the next chapter of this  unbelievable story unfolds. 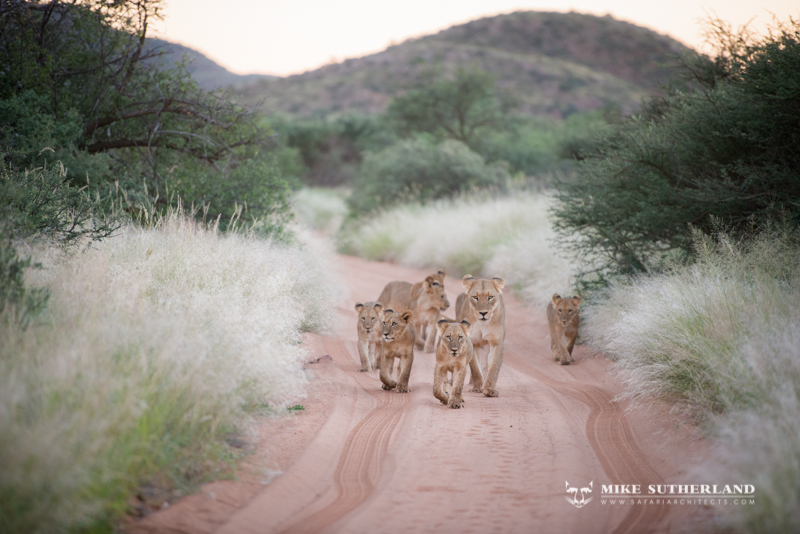 We came around the corner only to find the single lioness and all of the cubs, still alive and well. 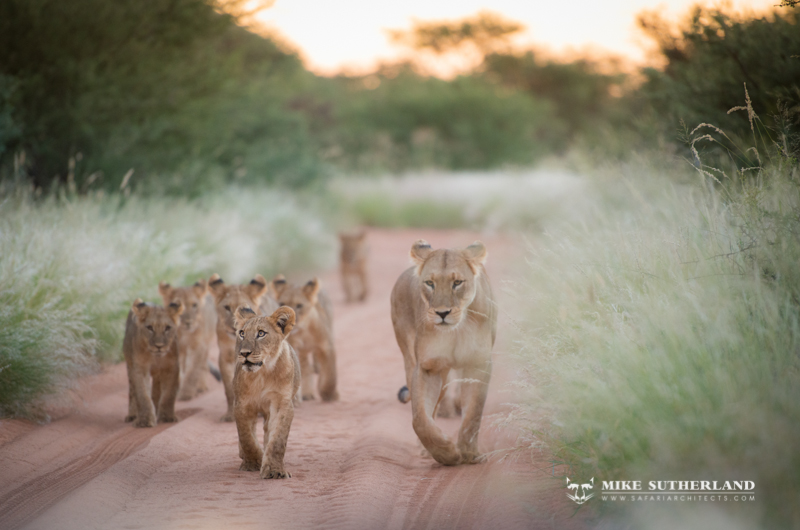 Each cub has developed their own character and individuality. 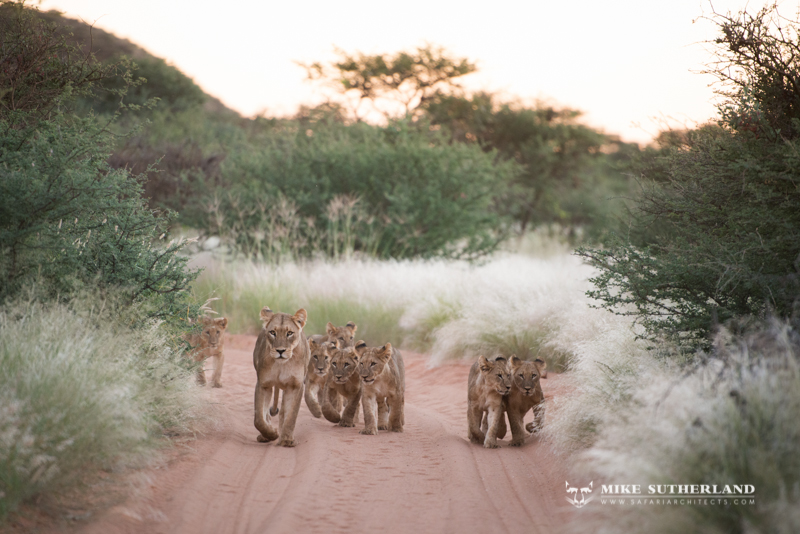 Their boisterous nature was so contagious that we laughed and sighed as they played in front of us. 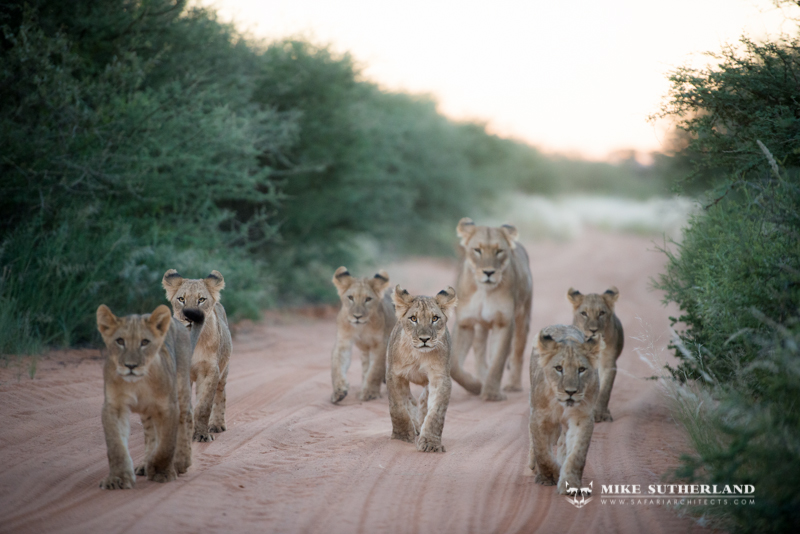 Such a story will hold its place in my memory for a long time to come!

I look forward to visiting Tswalu again soon, to continue to follow this formidable lioness and her seven amazing cubs. Life in the wild is nothing if not unpredictable, so we know that this story is not over yet. They undeniably will be faced with many more hardships in the future. I truly hope that the resolve, strength and effort this lioness has shown is rewarded with all 7 surviving to adulthood.

To go and watch the video of the pride, click the link below:

The Spirit Of Safari