This week we chat to Daniel Crous, expert safari guide and wildlife photographer! We met Daniel in February 2018 while on safari in the Okavango Delta, and wanted to give you all some insight into his exciting career and rich background in the wilderness. He has currently just wrapped on shooting the acclaimed BBC Earth series Dynasties Meerkats. Read below to learn more! 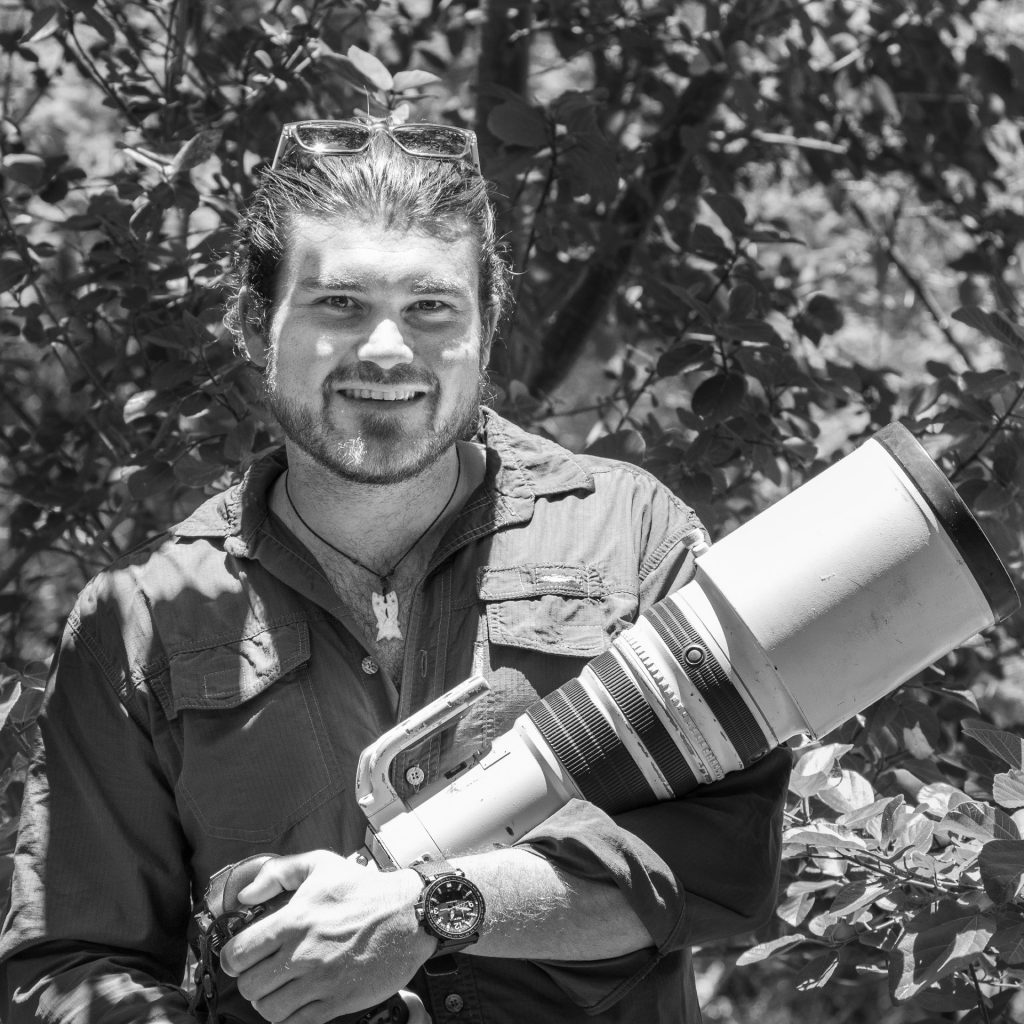 Safari Architects: Where did you grow up and what ignited your passion for the wilderness and wildlife photography?

Daniel Crous: I was born in England and raised in Botswana. My parents were camp managers, meaning that the wilderness was always around me. I spent the first five years of my life living in total isolation in the bush! My dad was a photographer and sold postcards with his photographs on them to get me through my early years at school. When I was about 12 years old, my dad gave me a film camera and that’s when I started taking photos for the first time (this was essentially the start of what I didn’t yet know would be a career in photography!). I went to South Africa for my High School years and then got a job in the tourism industry after completing Hotel School. I first travelled to the Seychelles where I worked for a year, which was then followed by two summer seasons in Europe to run Contiki tours. After this, I spent a season managing a ski resort in the French Alps. Finally, after a stint in South East Asia, I felt that I wanted to settle back home, so I returned to Botswana and have been based here in Maun ever since! It was only when I returned that I truly started spending decent periods of time in the bush which inspired me to grow my photography skills. Suddenly a hobby became a passion!

Safari Architects: How did you get started as a manager at Qorokwe Camp in the Okavango Delta?

Daniel Crous: As mentioned my parents were camp managers, so my dad was involved in the company already and family friends of ours were running the camp at the time. Eventually, they wanted someone that was familiar with the area and the industry to take over and that’s how I landed the job. I had also done a lot of work for Wilderness Safaris before in the Congo, so they were keen to get me back too. It all worked out extremely well. 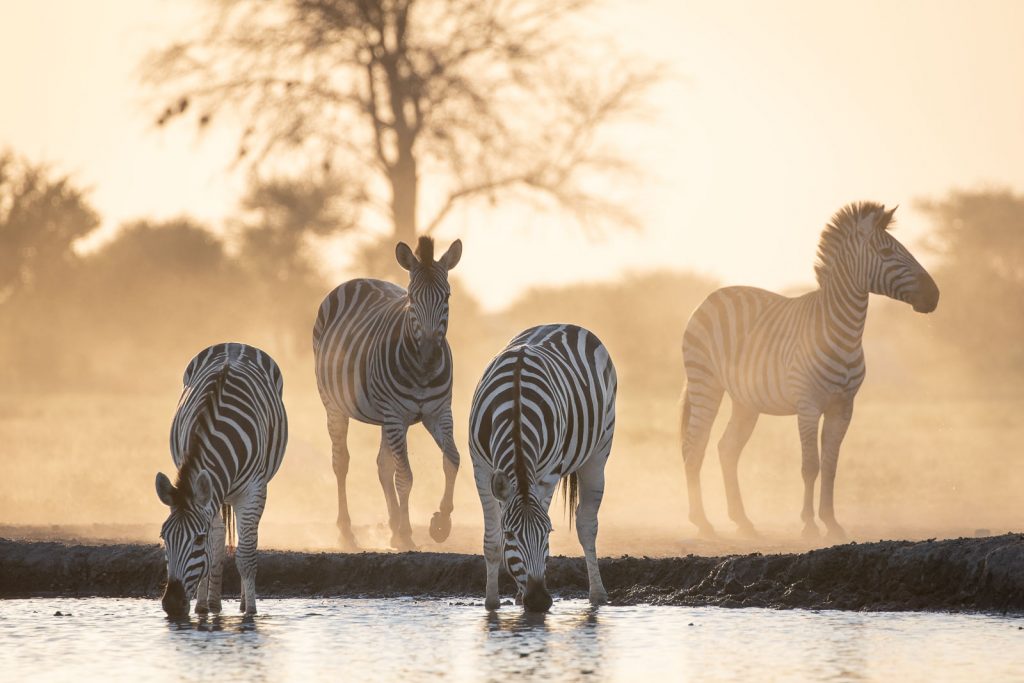 Safari Architects: You run a travel agency – how did this get started?

Daniel Crous: Good friends of mine were running a young travel agency. As they are photographers and guides too, with similar ideas to mine, we had a lot in common and decided to team up! This was when I joined them at Earth Ark Travel.

Safari Architects: Can you tell us about Okavango Gin, Botswana’s first craft gin?

Daniel Crous: Okavango Gin is an exciting step for Botswana, our first distillery and a really good one at that! Naturally, the lockdowns and alcohol bans have made it a very difficult time to launch. However, we look forward to an official launch sometime this year! We are filming and producing their marketing campaign which has been a lot of fun! 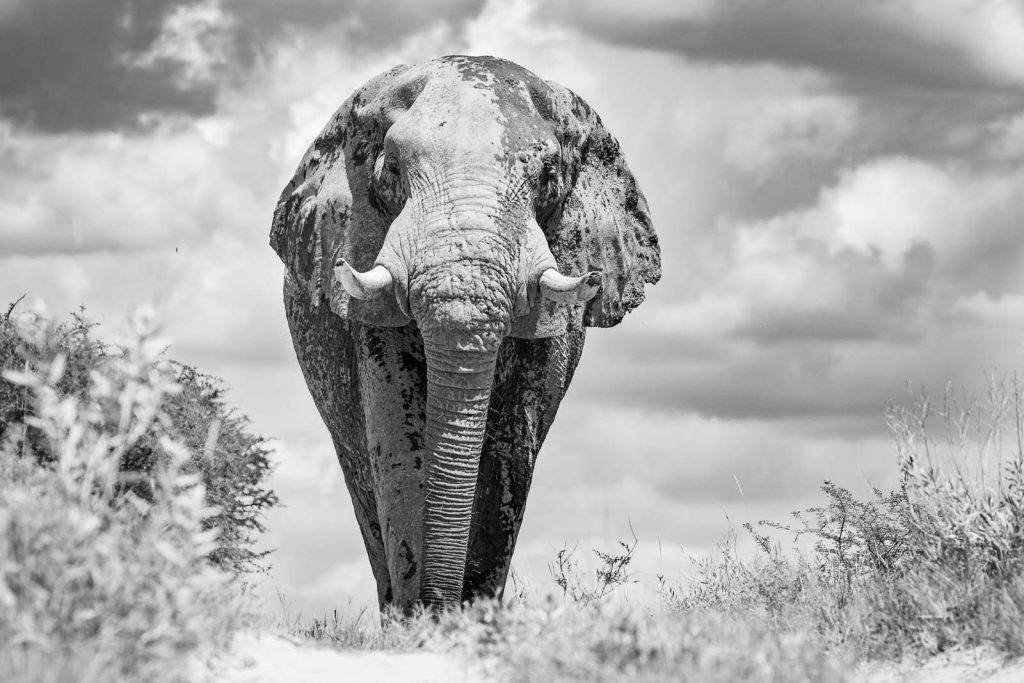 The most regal of all Africa’s animals.

Safari Architects: How did you hear about the opportunity to work with the BBC on Dynasties?

Daniel Crous: The BBC normally sends out a crew of people to wok of these kinds of documentaries, however due to Covid they started looking for people on the ground to do the camera work. A good friend of mine runs a film fixing company and he got asked to put a crew together to go out and get the outstanding footage needed to complete the documentary. He was a freelancer, and we were both available. I was signed on as a gimble operator/camera assistant.

Safari Architects: What was the filming schedule and experience like?

Daniel Crous: It was two weeks out in the salt pans of the Makgadikgadi. There had been a BBC crew out there at the end of 2019 that had already captured the majority of the footage, so we were essentially just filing in the “footage gaps” whilst also going for the “glory” shots with gimble movement. Our schedule was solely dependent on the meerkats themselves. They would usually emerge from their burrow at around 8am/9am when it was warm enough, then would return to the burrow during the heat of the day (which is when we would return to camp for a lunch break) and would then emerge again when it was cool enough in the later afternoon. We usually spent about 5-7 hours with the meerkats every day.

Safari Architects: Did the meerkats react to your presence? Was it hard to get close to them?

Daniel Crous: The subjects of this documentary were the habituated meerkats of the area. They were still wild and had no human alteration or interference in their lives, but they were very much used to human presence and were therefore totally comfortable with our being close to them on a daily basis. Before filming even commenced, they were also regularly visited by what is known as a “meerkat monitor”, a person whose job it is to document any new information within the meerkat family (and also keep them habituated). Therefore, the meerkats were well used to humans being around. 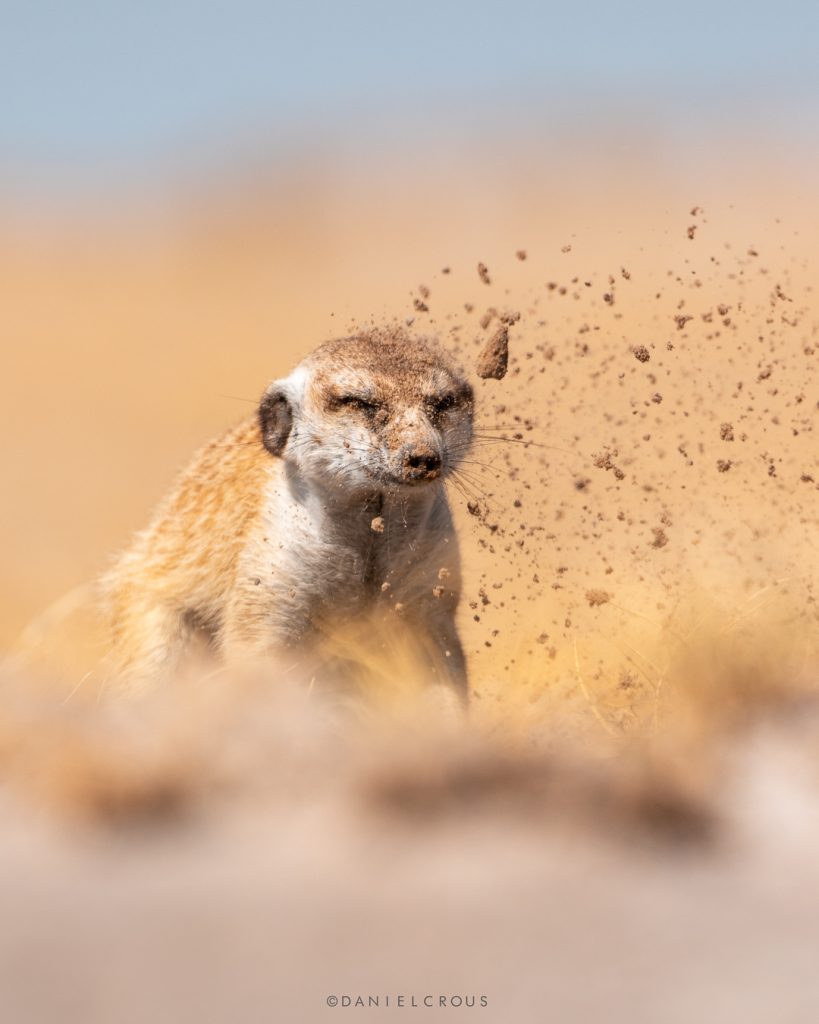 Digging is a way of life for a meerkat.

Safari Architects: How did you know the names and background stories of the meerkats?

Daniel Crous: Once again, the meerkat monitor was the one who gathered and noted all of the relevant information for the documentary itself such as names and relationships. Therefore, they could already identify each meerkat, knew the family dynamics and were familiar with their daily schedule due to regular observation. The stories of them wanting to cross the salt pans to avoid danger, or the reasons for the exiling of certain meerkats, or even the smaller details and stories things that were narrated about the meerkat family, were all calculate and highly accurate assumptions or observations based on documented meerkat behavior across Africa.

Safari Architects: Where would the crew stand during the huge dust and rainstorms?

Daniel Crous: The major storm scenes were filmed during the wet season, long before we started filming. We were therefore lucky to have avoided these dangerous storms altogether whilst doing our own filming! For the cameramen and crew who did have to film during these storms however, the consensus was (and always is in these situations) film as long as you possibly can and then run for cover! Standing in one of these dusts or rainstorms for too long is the furthest thing from a good idea, as suffocation is a huge risk. It is also not ideal for expensive cameras to get covered in dust and water!

Safari Architects: Was it hard not to get emotionally involved in the lives of the meerkats you were filming?

Daniel Crous: As these meerkats were habituated, there was definitely a sense of familiarity surrounding them. However, as mentioned before, these meerkats are wild and human interference or involvement is not allowed under any circumstances. So yes, as emotional as it was to watch them go through those dangers and hardships, our only job was to observe and to document.

Safari Architects: Did you keep in touch with the BBC in terms of future projects?

Daniel Crous: There is definitely a sense that because this project was so successful, working remotely for the BBC may become a reality for many more local cameramen and crew! It is an exciting concept and I look forward to seeing what other projects we can work on together in the future!

When We See Her Again...