A Safari of True Contrast

For a first time safari traveller, many thoughts, emotions and questions run through your mind. The questions will usually be unanswered or only vaguely understood. You may have some preconceived ideas of the things you might see or the type of experience you are likely to have, however, this is rarely the case. The element of the unknown is usually the best part of the journey. To a traveller armed with an open mind, any encounter will be embraced with excitement and unrivalled appreciation!

In mid March, our team hosted a wonderful family on their safari to South Africa. This trip took us to two very special, yet very different lodges: Tswalu Kalahari, in the north western region of South Africa and Londolozi Game reserve in the north east. As a result of these lodges being on opposite ends of the country, we were able to experience two wildly contrasting habitats in terms of their weather patterns, rainfall and animal species.

Our journey began in Johannesburg and after a short, private flight we touched down on Tswalu’s runway. We were greeted with warm smiles and plenty of much-appreciated water! There had been a large amount of rainfall in the days leading up to our trip (much more than expected in this semi-arid “green-kalahari” as it is often referred to by locals) and as a result, vast puddles decorated the roads. This wet terrain, paired with a crisp chill in the air, made for perfect game viewing weather!

Tswalu is a magical place set against the backdrop of the Korannaberg Mountains to the east and endless dunes and plains in the west. A land of true diversity in every sense of the word and the perfect start to our safari, one which would truly open up a new world to our guests! From various species of antelope to meerkats, pangolins, bat-eared fox and aardvark, Tswalu has the potential to amaze even the most avid African traveller.

Here we spent three luxurious nights at Tswalu’s beautfiul Motse Lodge, the main lodge on the reserve. We were given total free reign to explore the surrounding land with no restrictions on game drives or meal times. We were treated to a fully immersive, exclusive experience in the largest privately-owned game reserve in South Africa.

We spent one-on-one time with habituated meerkats and were able to walk with the elusive pangolin in the dark, two sights we were extremely privileged to behold! 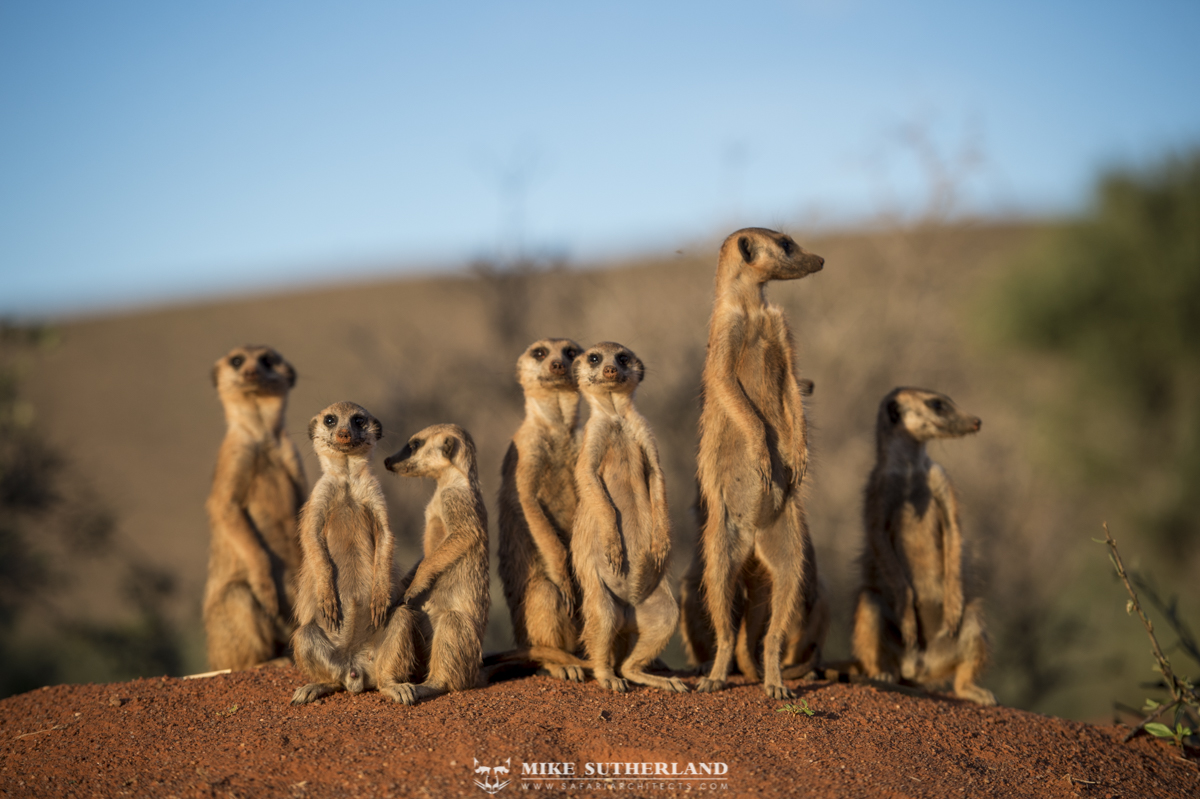 A family of meerkats enjoying the last rays of afternoon sun. 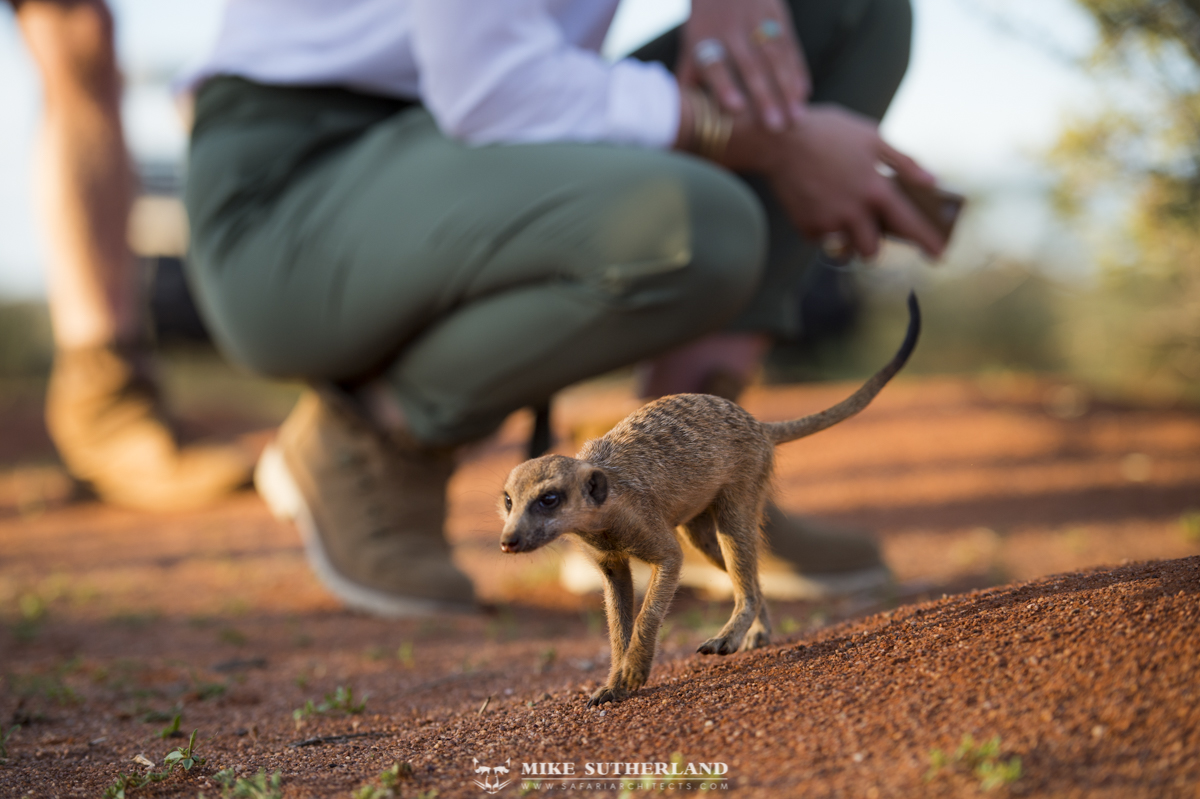 To be this close to these meerkats was a very special experience. 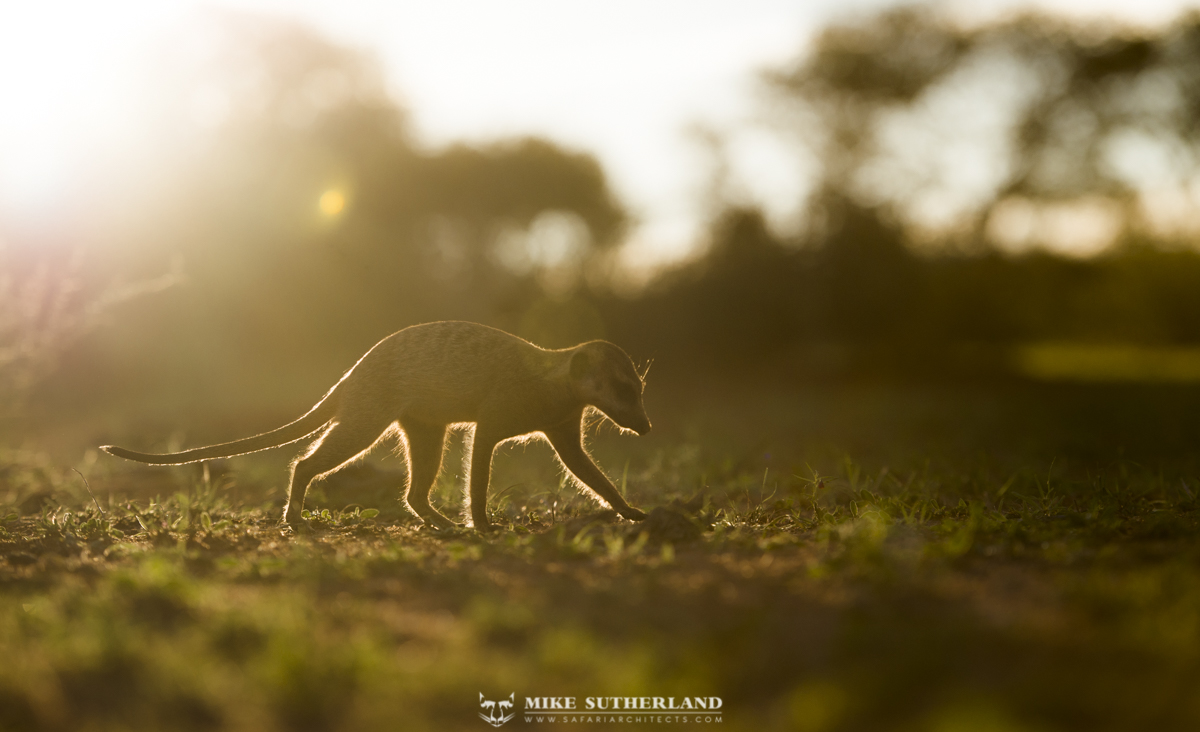 As the evening sets in, some of the family forage for a few last bites to eat. 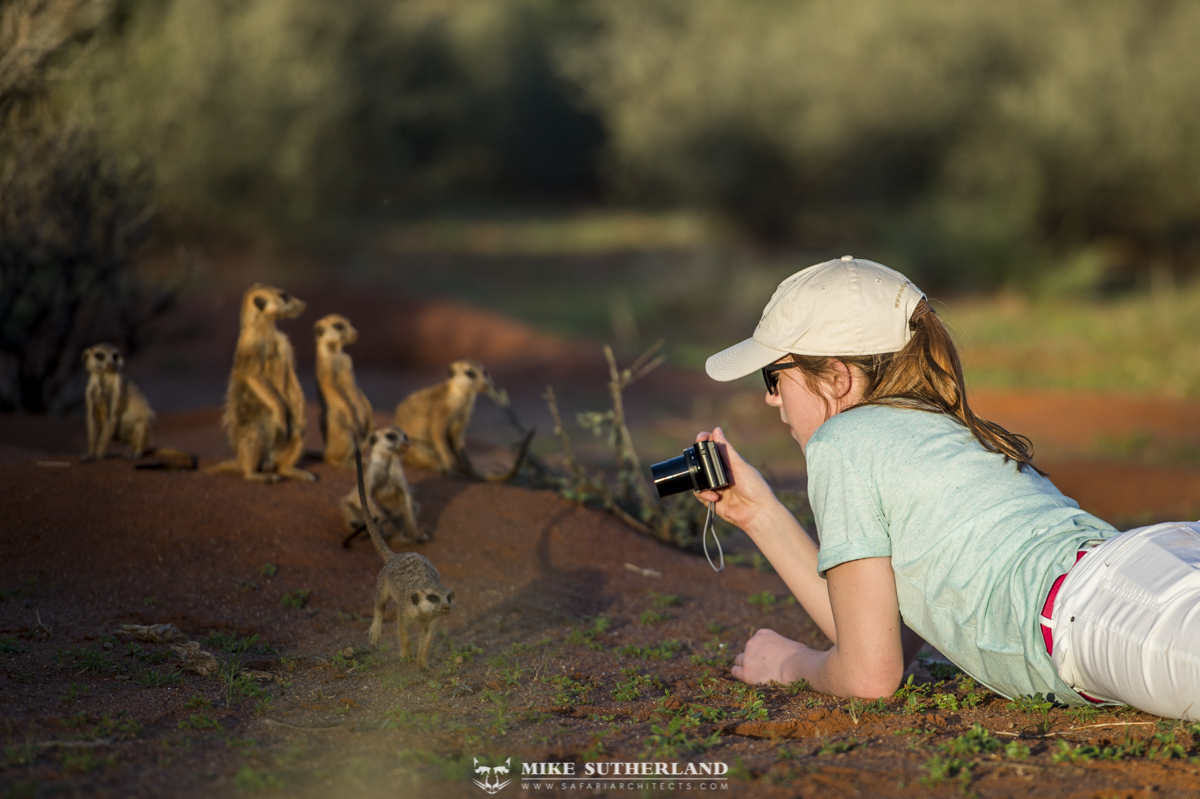 There is no way to fully understand this encounter unless you are in this exact spot. An afternoon spent with the resident meerkats. 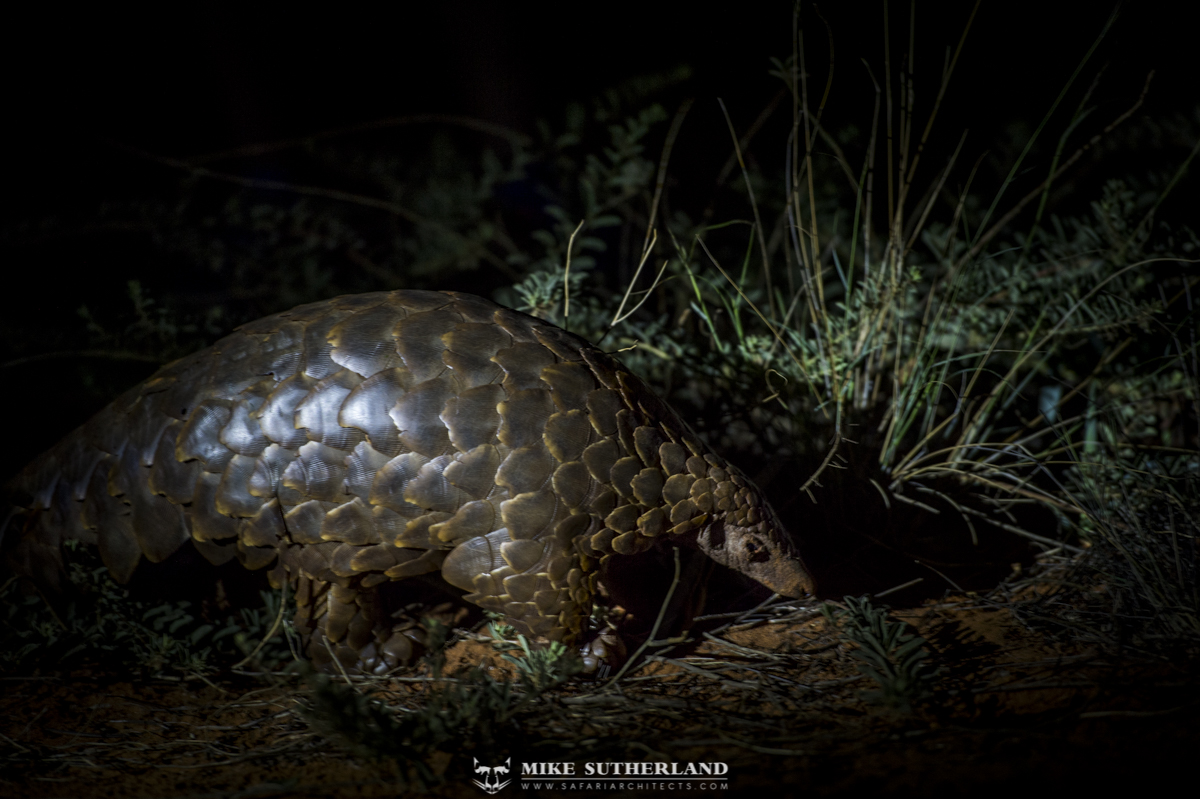 Our first evening and one of the most elusive creatures in Southern Africa gave us an amazing opportunity!

With the understanding that we would be leaving Tswalu soon and heading to Londolozi in the Sabi Sands, our priority to find leopards was put on hold and we now focused in on the impressive Kalahari male lions and cheetah. Unfortunately, due to the heavy rain, we were not able to find the latter, however we did spend a gruelling and exciting morning tracking down the resident wild dog pack! After a few hours in the pouring rain, on and off the tracks, through drainage lines and into valleys, we found the pack and were treated to some truly special moments! A young male lion, beautifully framed by the trees. 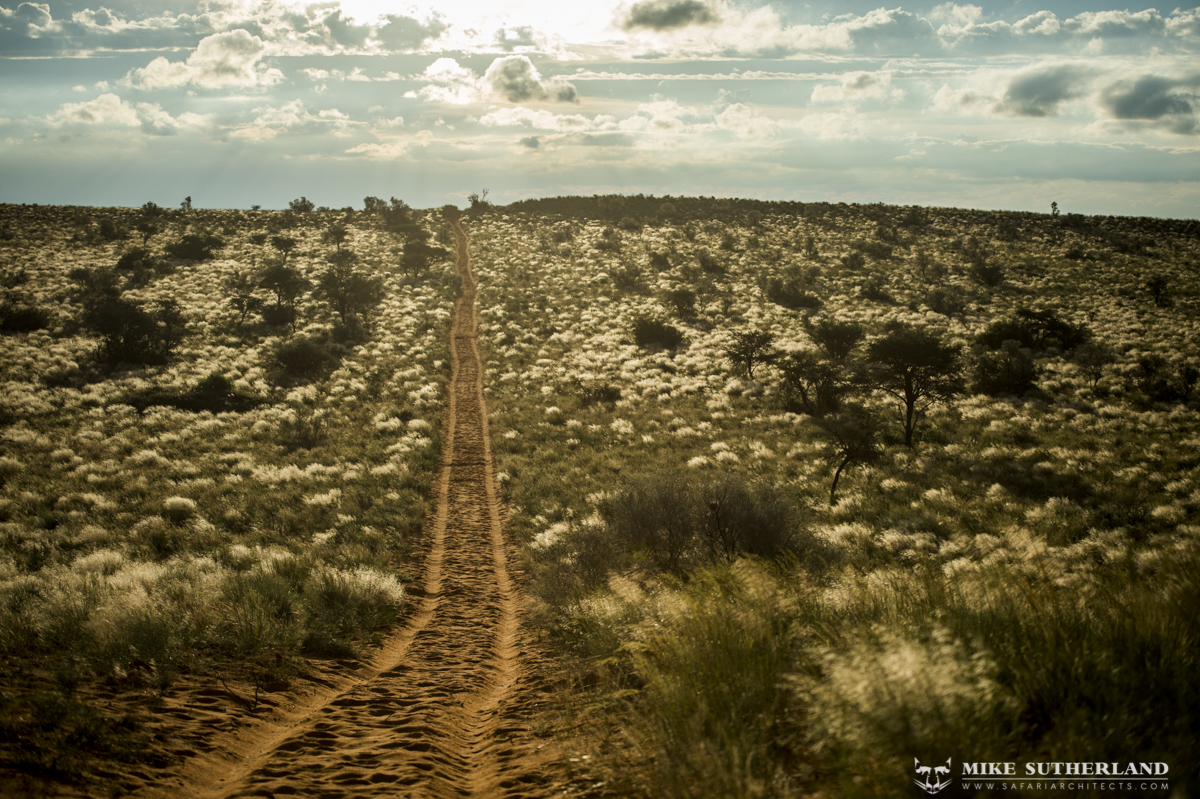 Summer hues were very evident on this safari to Tswalu. 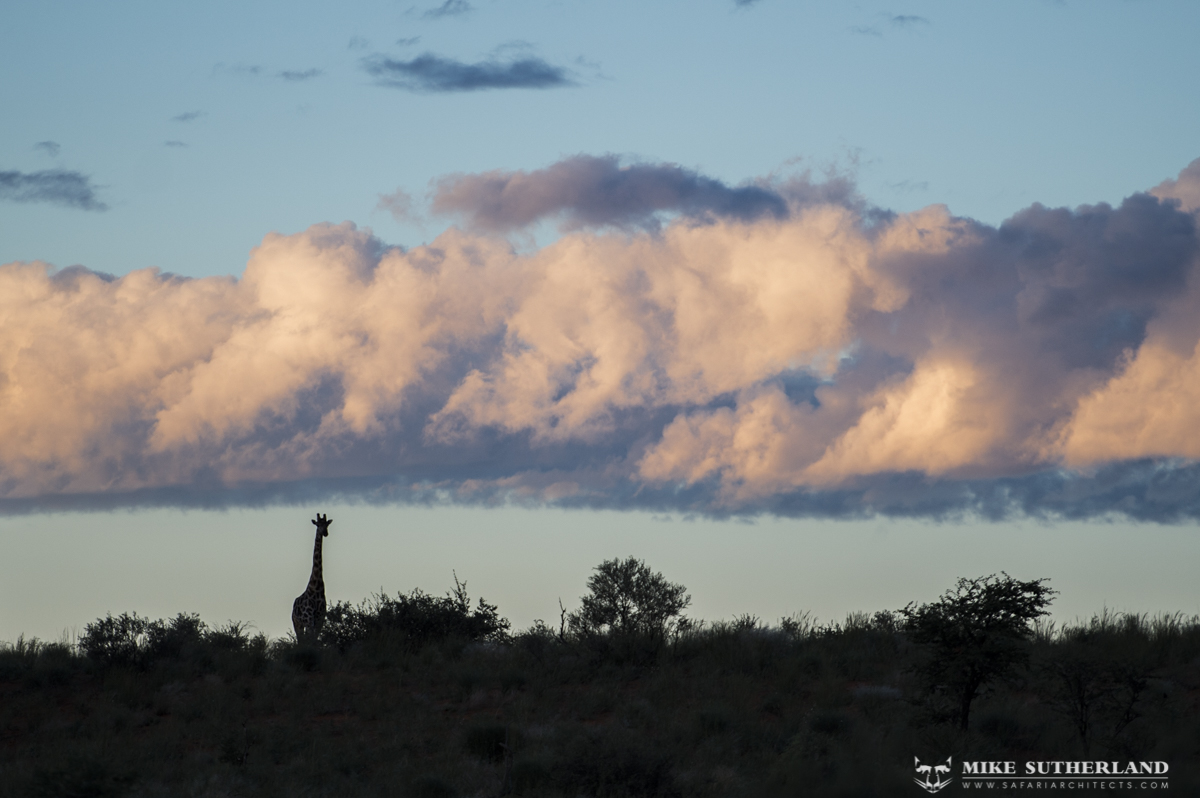 A silhouette of a giraffe on the crest of an ancient dune. Some of the very best nocturnal viewing in the country.

Tswalu is a place of extreme contrast, vivid colours and an exceptional array of species. The views are endless, the sunsets last forever and the night sky is unrivalled. We enjoyed every moment spent out there before stepping onto the plane and heading back to Johannesburg for a quick overnight stop at AtholPlace Hotel & Villa.

Travel tip: When making the journey from Tswalu to Londolozi, there is an option to stop in Johannesburg and overnight or head straight on to the Sabi Sands in the same day. The latter option requires a very long travel day and guests are likely to have a much shorter first afternoon game drive. We decided to overnight in the city at the beautiful AtholPlace Hotel & Villa, and then got a taste of the Johannesburg night life at Marble Restaurant.

After a relaxing morning, we made our way to an exclusive hanger facility at Lanseria Airport where we boarded our private charter once again and headed off to Londolozi Game Reserve. An hour’s flight later, we touched down and took a short drive to the lodge. Here, we settled into the breath-taking luxury and tranquility of the Sabi Sands.

Having come from an extremely arid area previously (albeit the rain) we were now among lush grasslands and dense bushveld, on terrain where magnificent animals such as elephants roam frequently. As we were now in a different habitat and landscape, our focus shifted back onto big cats – expectations were high! 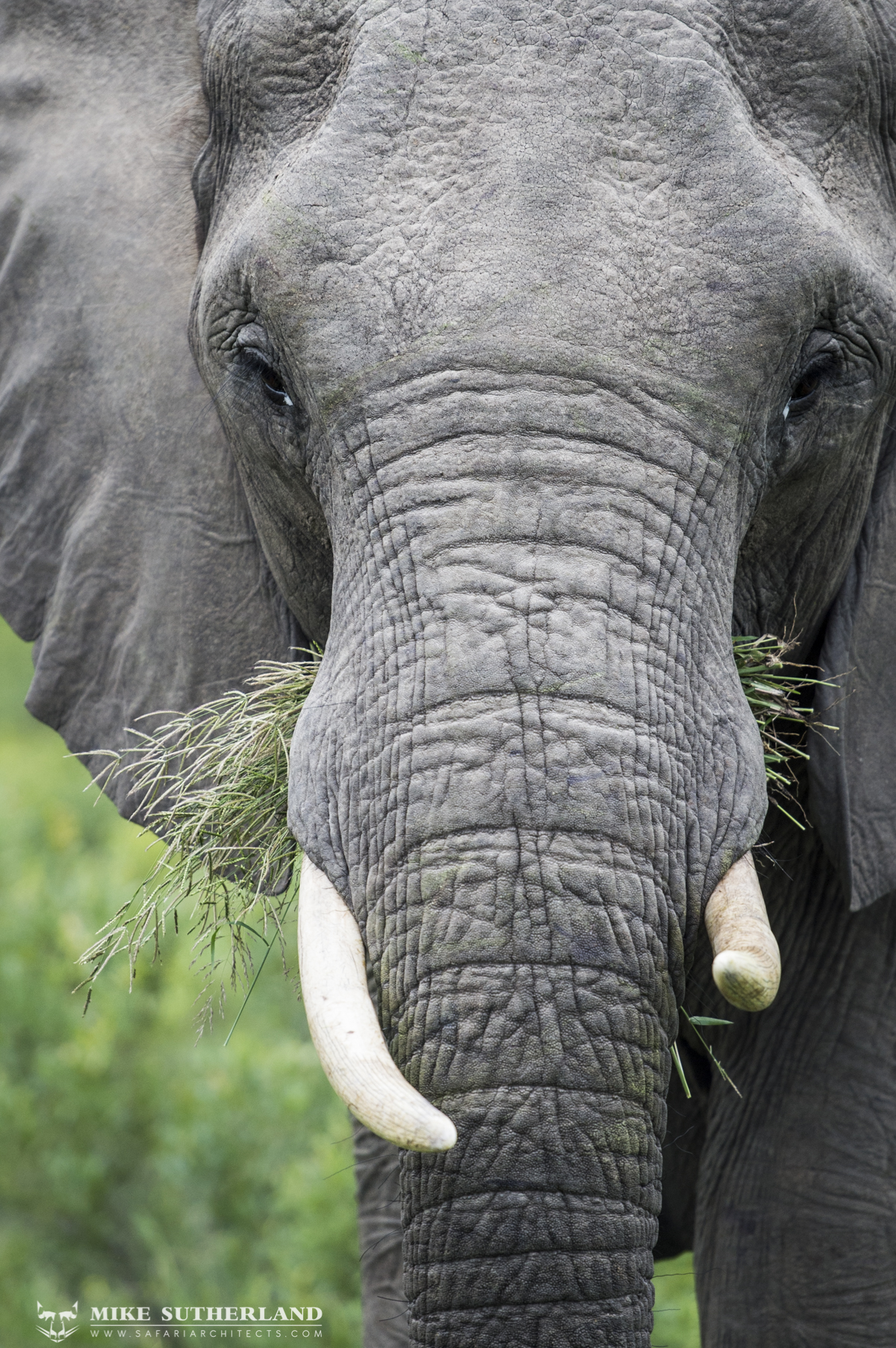 The giants of the continent. 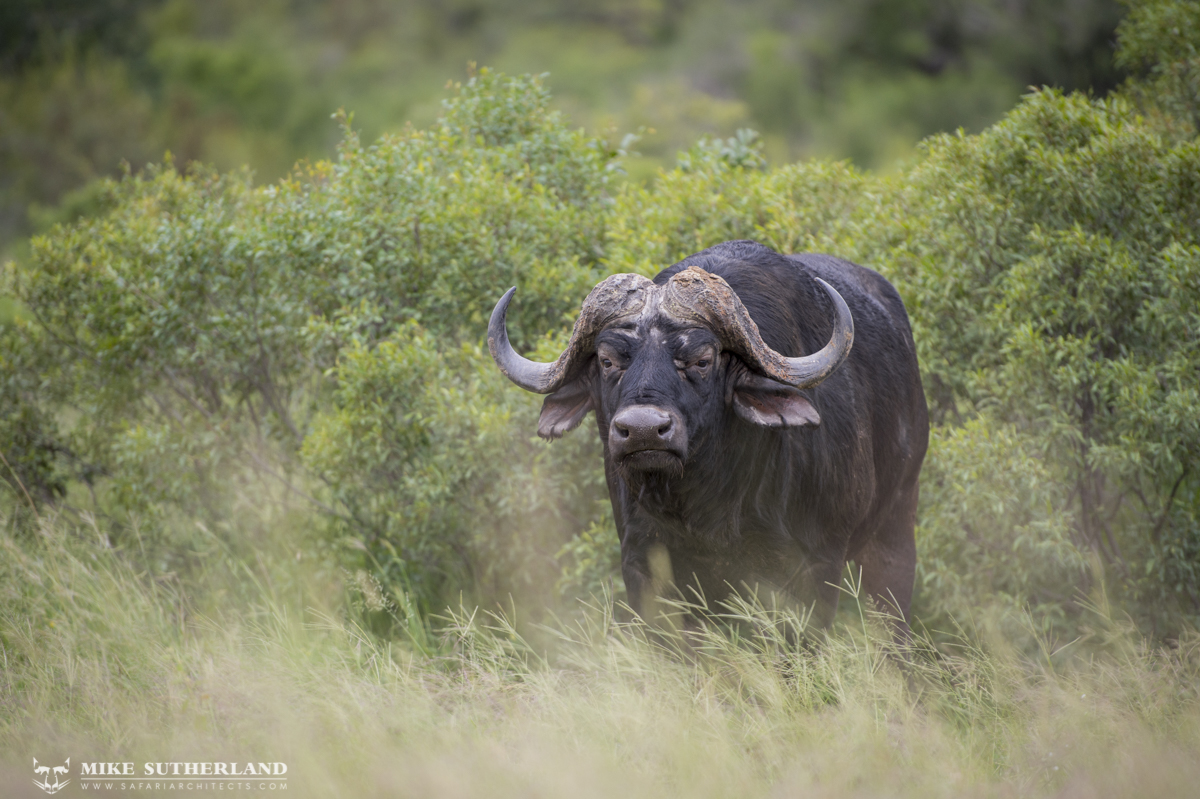 A stunning buffalo bull, living out his last days alone.

Our most memorable encounter happened on our first morning at Londolozi. With leopards being the main focus, we set out with high hopes. However, what we encountered was a once in a lifetime sighting and far beyond what anyone had anticipated.

Not long after leaving the lodge, we stumbled upon some fresh tracks (a well-known leopard from my time as a guide at Londolozi) Working closely with my tracker, Life, we tracked intuitively to preempt her movements. Luck was on our side that day and we managed to find her quickly, on early morning patrol. She had determination in her walk and we quickly worked out that she was in pursuit of a resident male! 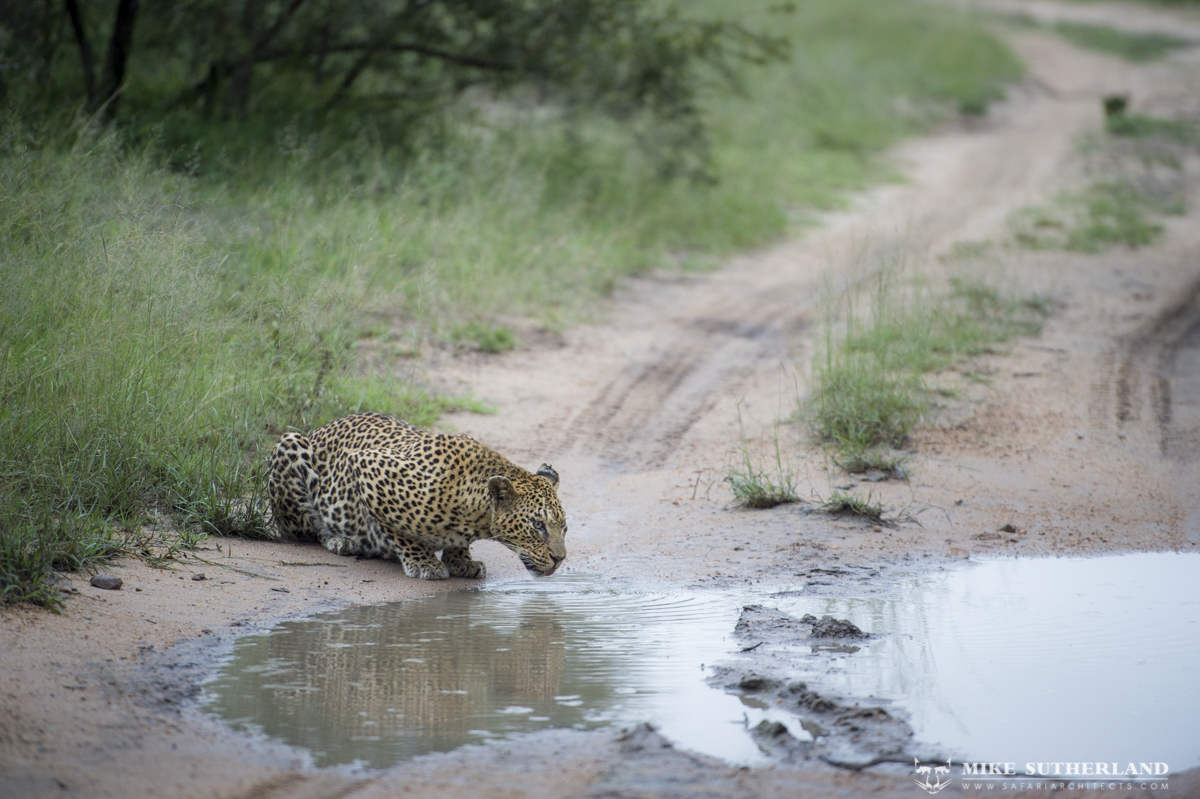 Our first morning at Londolozi, and our first leopard sighting.

Her courtship was a priority and she spent most of her time scent marking and actively calling out, expecting a return from the male. She paid little attention to our vehicles and for that reason we were lucky enough to experience some extremely close encounters with this beautiful cat. Some intimate moments spent with this stunning female.

Having spent over an hour with her, we were slowly coming to the end of the sighting and decided that we would spend just a few more minutes with her before leaving to explore more of the reserve. At this stage she had entered a denser area, winding her way through the thickets and choosing paths in order to avoid the long grass and areas that would potentially be uncomfortable under foot.

Then, suddenly, she stood still. A brief pause and then… she dashed into a small bush and emerged with a baby steenbok writhing for it’s life!! Hunting right in front of our eyes, her bounty still alive and making loud, conspicuous distress calls! Nearby predators or scavengers would hear this and, like clockwork, a hyena arrived and sent the leopard scurrying past our vehicle and up the closest Marula tree.

She scaled the tree effortlessly and spent the next hour surveying the immediate area for any more threats before mistakenly dropping the, now motionless, steenbok to the ground. She made quick work of climbing down the tree to retrieve it and swiftly made off to a safer spot.

It was a sighting that we will undoubtedly remember for many years to come! 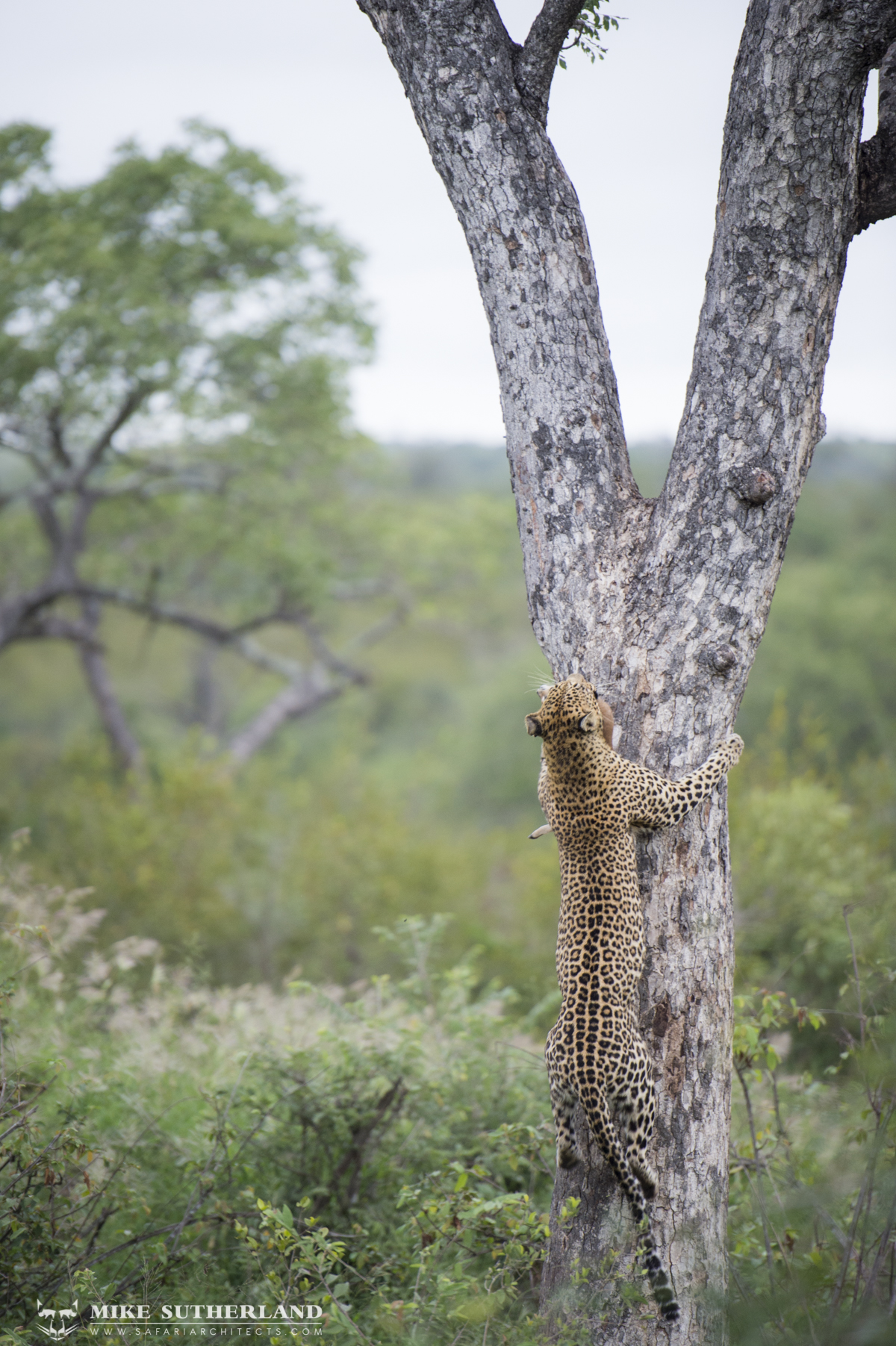 One of the most exciting encounters on our safari. Nature has it’s own plan and each animal plays a role. The female leopard took careful note as the hyena moved off into the distance. 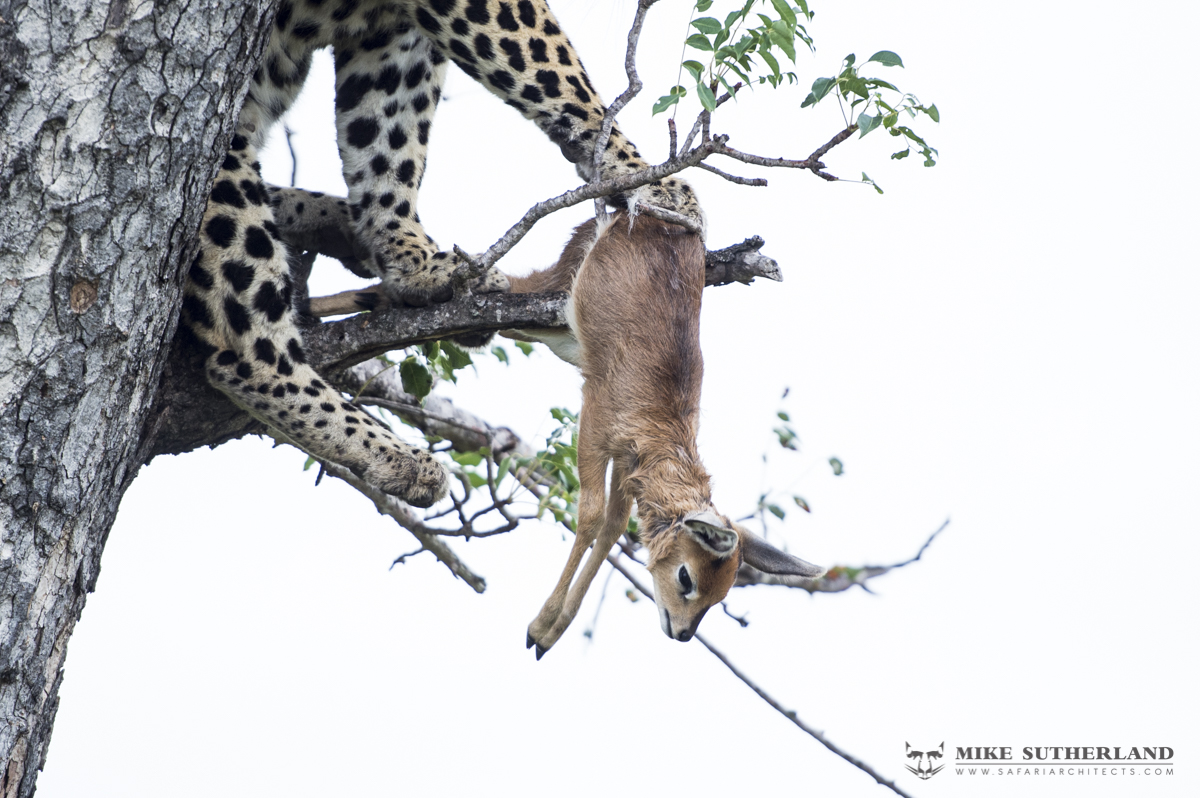 Mom always told us not to play with our food! After dropping her kill, this female had to make a hasty recovery before the hyena returned.

The amazing sightings did not stop with this leopard, however, we also spent much time with large elephant bulls, hippos frolicking in waterholes, roaring lions and large herds of buffalo. We also learnt a lot about our cameras and how to use them differently in order to capture fascinating images, yet making sure to enjoy the moments we were observing fully and not live behind the lens. It was all about balance and we certainly succeeded! Some enormous elephant bulls were present during our stay. A curious and inquisitive cat. 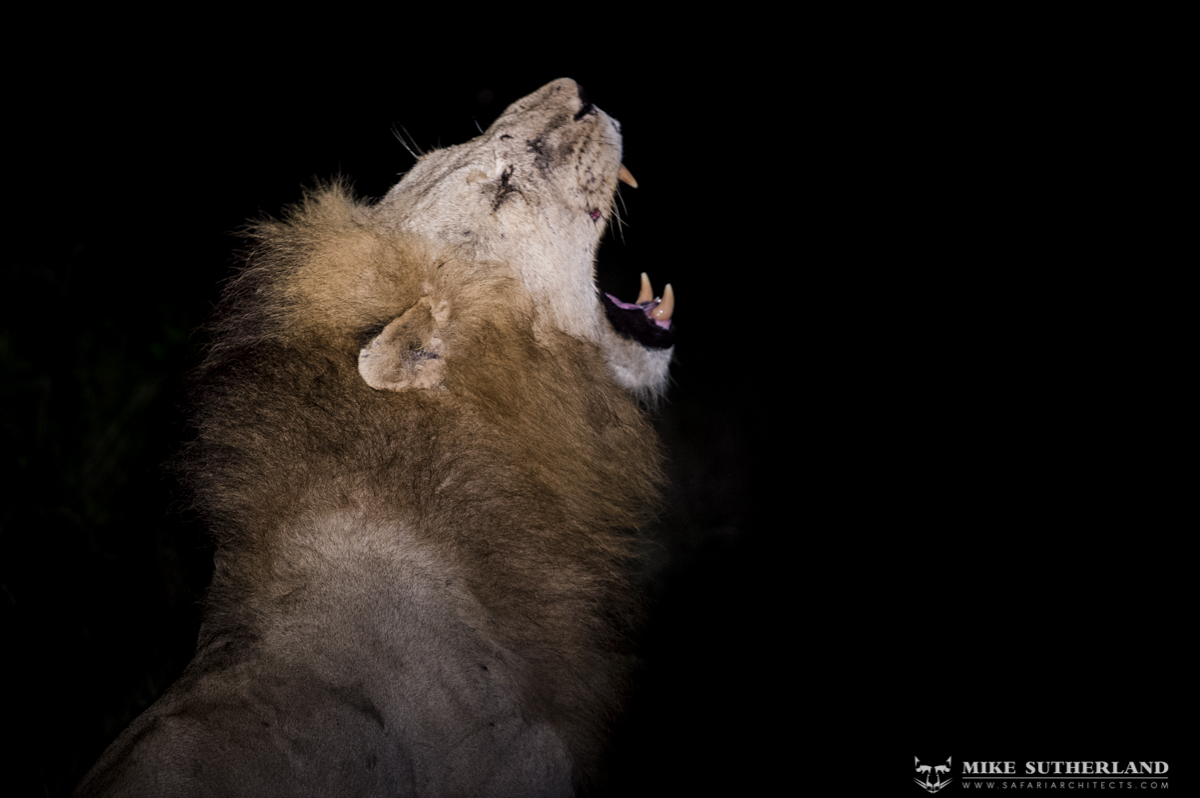 An evening spent with the Birmingham males, roaring into our vehicle. 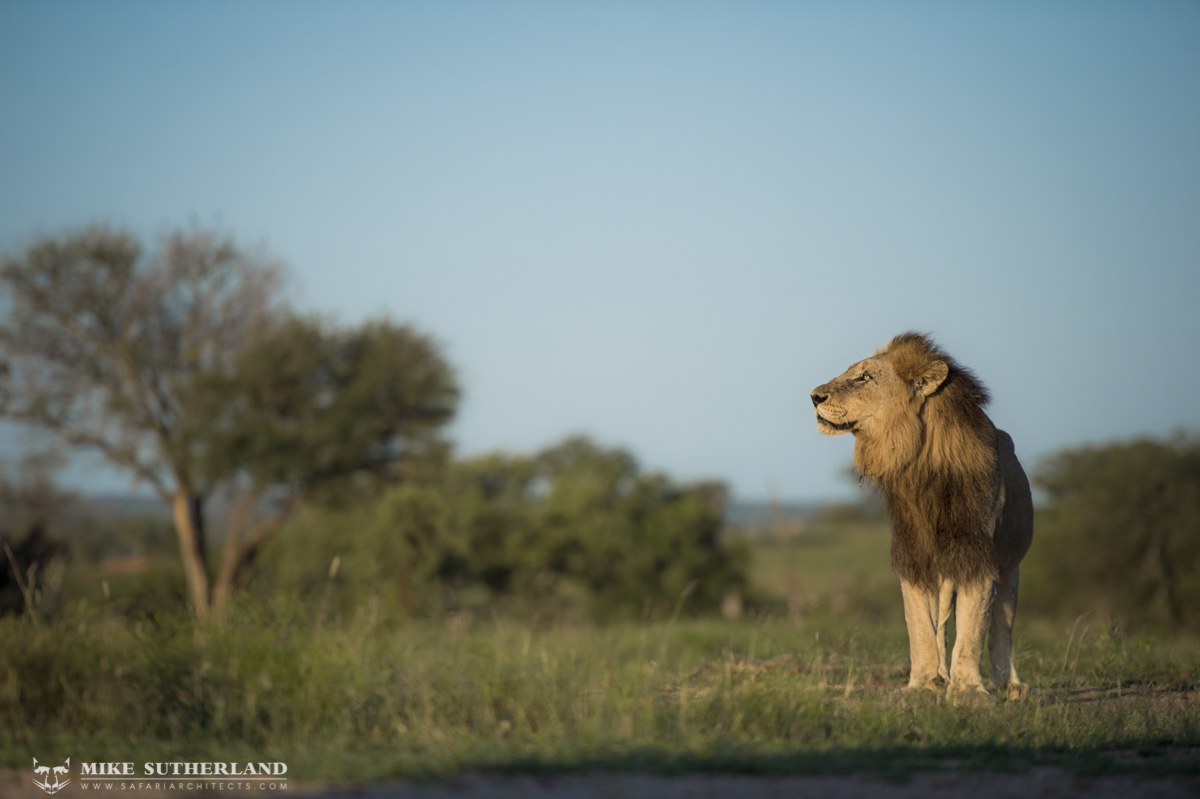 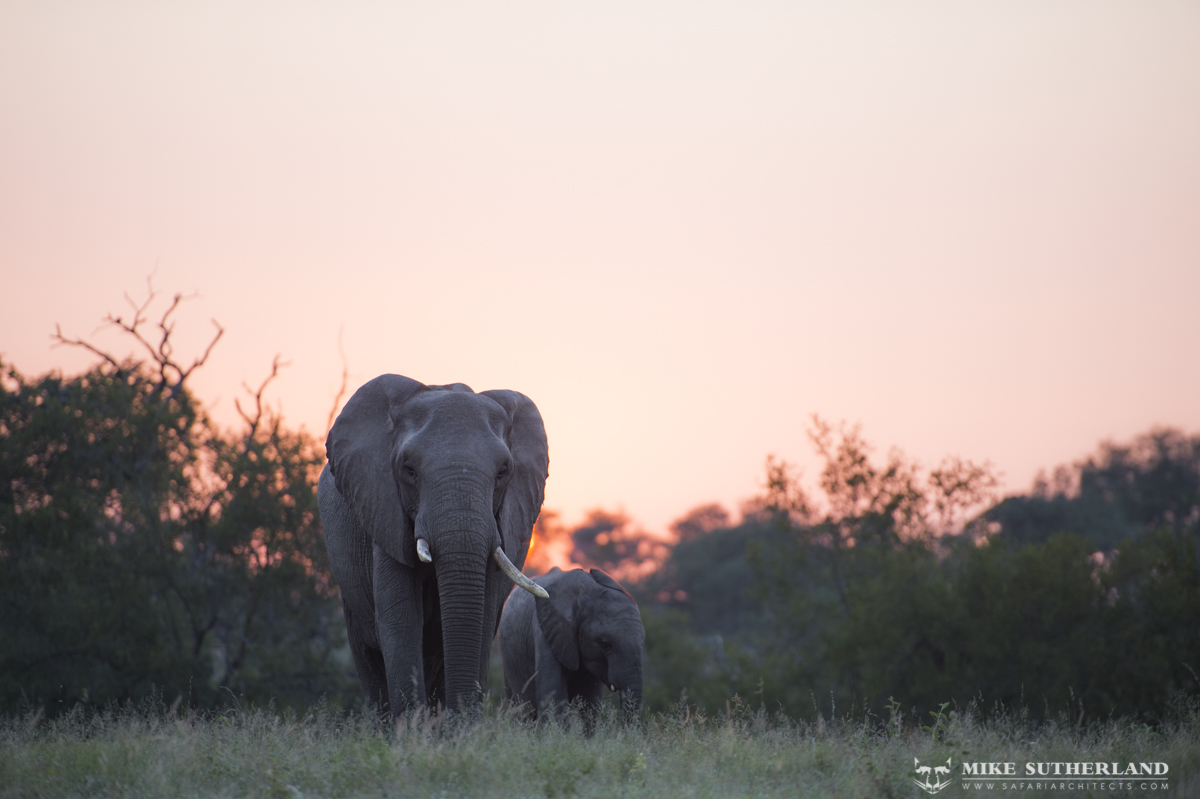 On this incredible safari together we told stories, we laughed and made long-lasting memories. We ate to our hearts content, enjoyed drinks at sunset and woke with the rising sun each morning. We observed, we engaged and ultimately we all left with a new or broadened understanding of the magical place that Africa is. 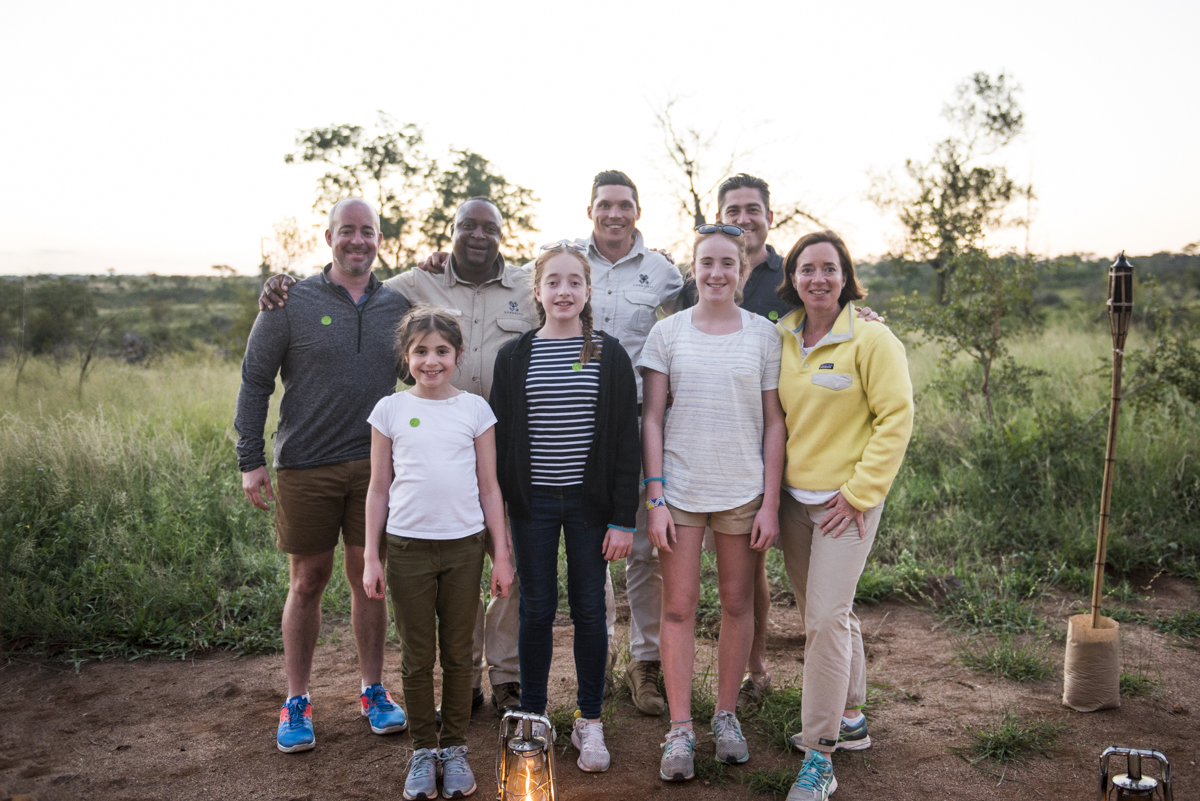 Enjoying our last evening together before we bid farewell to Londolozi.

The Safari Architects team looks forward to hosting this special family again next year in Botswana!

Written and Photographed by: Mike Sutherland