Mike Sutherland has just returned from a 7 night private photographic safari to the beautiful Zuka Lodge on Phinda Private game reserve. With the focus on photographing cheetah and black rhino, Mike and Ted set out on with their private land rover to focus on these 2 flagship species on the reserve.

The results from the trip speak for themselves.

Stepping back onto the reserve where it all began, had me reminiscing of times spent here as a young University Graduate, trying to become a game ranger. Who would have thought that 6 years later I would be guiding my first private safari at the same place where it all started.

The brief sounded like a simple one. Being renowned for some of the best cheetah viewing in Southern Africa, Phinda was the only place that came to mind when my guest, and old friend Ted, approached me to set up a trip for him where he wanted to focus on photographing cheetah and black rhino. Phinda was the place to go in search of such elusive creatures with the hope of capturing some special moments with them.

After some time planning – booking the lodge, holding rooms and organising the private vehicle; we arrived to a parched land, drought stricken yet abundant with wildlife and birds. Our hopes were high and our cameras were charged.

We settled into the lodge, had a quick bite to eat and were met by our Phinda Ranger. We spent the first hour or so chatting about the specific goals of the safari and what we had come in search of: cheetah and black rhino. However, Ted insisted there be no pressure on any party and that a good time would be had by all, no matter what we ended up seeing. With that being said, we headed out on our first afternoon drive, in search of a family of cheetah. A mother and her 3 sub-adult youngsters.

After some time searching, our tracker left the vehicle on foot, searching for the tracks of these beautiful cats. We heard a crackle come over the radio: “Located the animals.” This was the beginning of an unforgettable week on safari. We spent the afternoon with the mother and her 3 adolescents, hunting and playing until the sun set over the Lebombo Mountains, leaving us with our first set of images to look through back at the lodge. A mother cheetah scans the open plains for prey, our first Cheetah sighting of many.

This female cheetah is ever-alert to protect her 3 sub-adult youngsters. 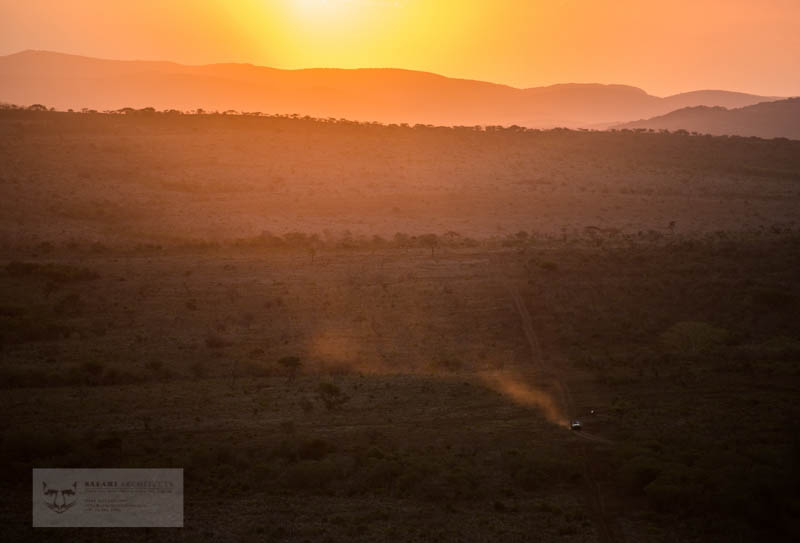 The sun sets over the rolling Lebombo Mountains, ending our first evening on safari.

Over the course of the next few days we were met with something unexpected. Something that the reserve was in desperate need of, but this exact thing may have an effect on our trip and our ideas of capturing the perfect images. Without prior warning, the heavens opened up and what was once a parched, dry land with little coverage and empty waterholes, turned into a very wet, very muddy landscape that limited not only our movements but those of the animals too.

With this being said, we were still determined to set out looking for animals, for it is with such an attitude that one is rewarded. So off we went, drive after drive, with our poncho’s on and even umbrellas at times, looking for the perfect opportunity.

As we were beginning to lose hope, we stumbled across a beautiful male black rhinoceros on a territorial patrol. With the persistent rain drenching the land and foliage. Any sign of this male in the area, through scent or olfactory would have now been removed, and so his duty would be to reclaim this land and ensure that no other intruder could take the opportunity to move into his territory and stake their claim on his land.

Being inquisitive and somewhat aggressive by nature, a black rhino is a difficult animal to view, let alone photograph. It takes patience, creeping closer and closer, ever so quietly. Each movement of the vehicle may provoke a reaction. A sudden jolt or aggressive pose, a raised head and forward pointing ears, or they may choose to merely storm off with their tail curled up, avoiding any further distraction.

This male was different, and allowed us to spend time with him and enjoy a few interesting hours by his side. The male black rhino pauses and lifts his head to investigate the noises coming from under the vehicles wheels. 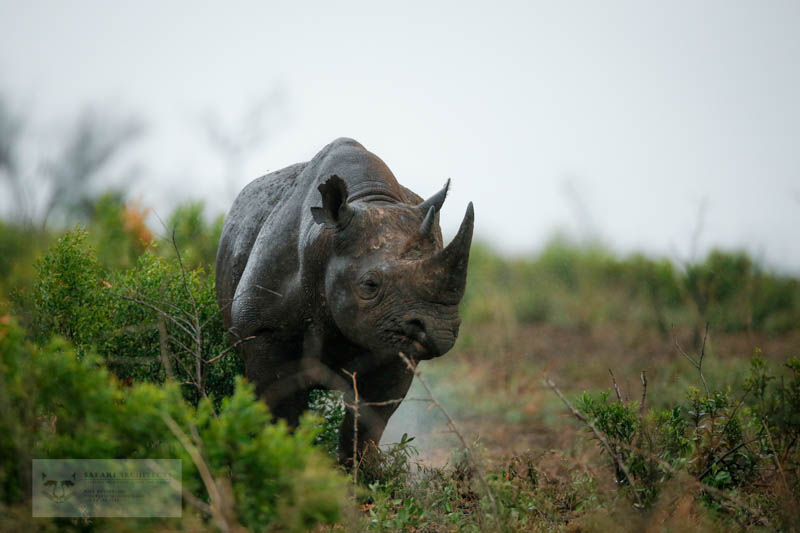 The black rhino marks his scent as he moves through his territory during the rain. Calmly moving toward us, allowing us to view him with no impact on his routine.

Whilst zigzagging through the bush staying ahead of the rhino, our tracker, John, noticed some vultures landing on some dead Marula trees not to far away. Usually, a sure sign of action close by. After some lengthy discussions on the vehicle, whilst observing the rhino, we agreed that the rhino was heading in the direction of the vultures, and that we should go and investigate what was up ahead, to pre-empt any interesting interaction.

What we found was a unique sighting that left us fascinated and satisfied after persevering through the rain.

3 young male lions, who had recently been pushed out of their pride, had come across the carcass of a dead zebra. The carcass had been there for a day or 2, but for hungry young males like this, any meal was a good meal. We came to the conclusion that the lions had been moving through the area and had seen the vultures swirling in the thermals and landing close to the carcass. Inquisitive by nature, they would have gone to investigate.

The scene would have played out something like this: After hours of searching for prey, a single vulture catches a glimpse of a carcass, possibly from a soaring height of a few thousand metres above the ground. A slow spiralling descent, catching the attention of hundreds of other vultures nearby, who scrutinise each other as much as they search the land for prey. One by 1 they descend, landing as close to the carcass as they can, without putting themselves in danger of lurking predators.

Once they realize no other large predator is nearby, they would descend onto the carcass and begin to feed, each of them performing a unique role in the feeding chain. Squealing, hissing and grunting, the vultures fight for best position. They feed quickly and move away to nearby perches. Lurking close by, 3 nomadic young male lions hear the commotion and hone into the sound, seeing this as a great opportunity to find a free meal and move in.

A hasty attack, clumsily running toward the carcass, sending hundreds of vultures back up into the sky and then perching on dead trees nearby. After the realisation that the carcass is not worth the effort, the lions began to play. And this is where we entered.

The young males, being adolescents, hone their skills through playful attacks on one another. Stalking, chasing and fighting each other, not paying much attention to the vultures or the large black rhino approaching the scene. After a patience wait and much deliberation, the rhino entered the scene and a back and forth battle ensued, where the young lions took it in turns to “play-stalk” the rhino. Not surprisingly, after some time, both parties decided it was no longer worth it, and they moved off, allowing the vultures to move back to the zebra and continue feeding in peace. 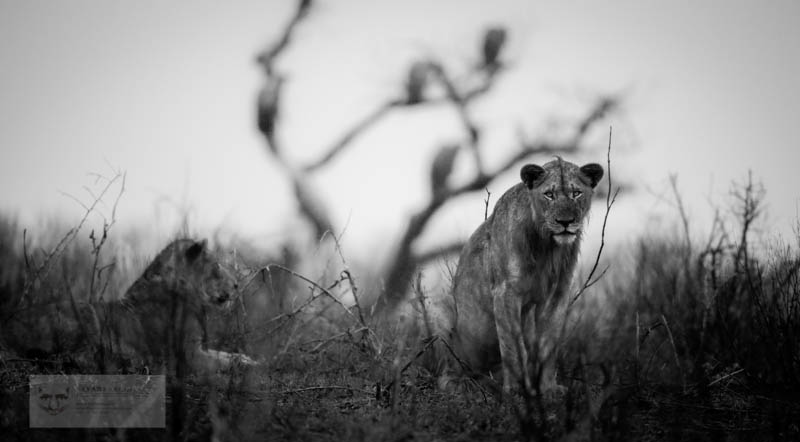 An interesting view of these young male lions with vultures waiting in the background for the chance at a meal. 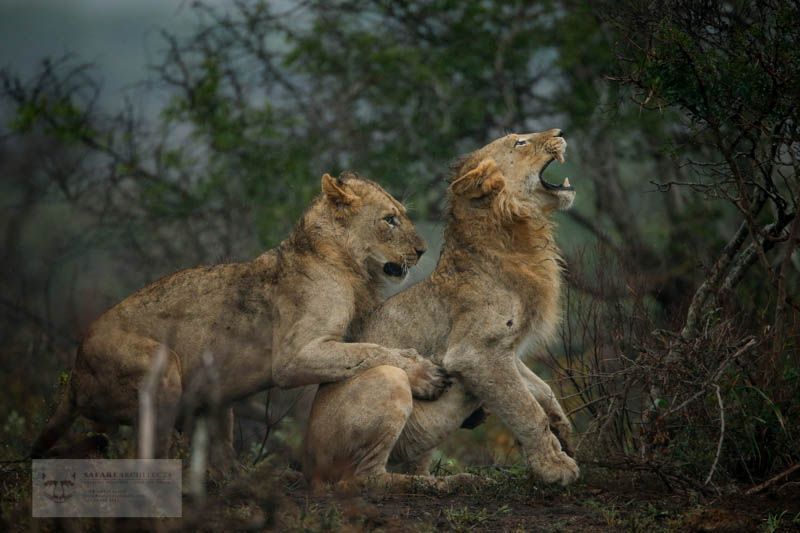 This male lion stalks his brother, who was unaware of his approach. 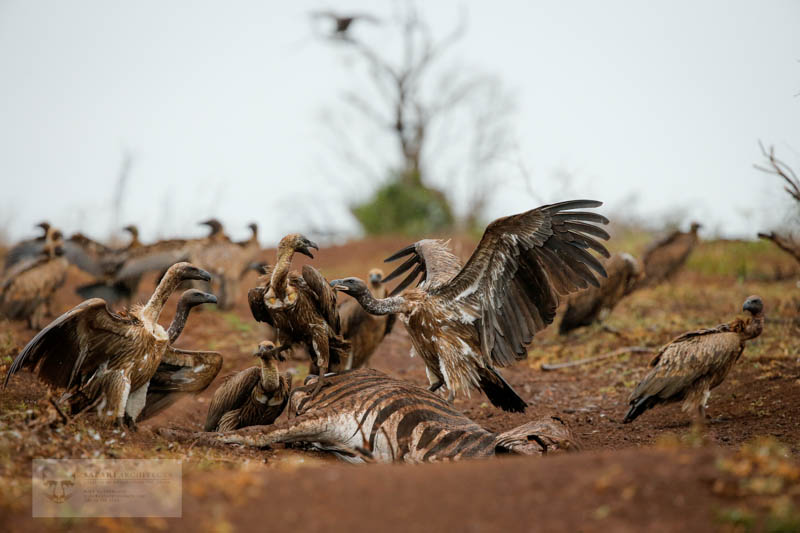 Once the lions had moved off their kill, vultures descend to fight over the remains of the carcass.

Three days of persistent rain and the land was soaked, however limiting our ability to explore the reserve. Animals hunkered down to avoid the cold and wet, yet we continued. At each dry opportunity, we set out looking for excitement. We spent hours birding and took every opportunity to photograph the spotted cats we were after. But there was one sighting that we had been planning for the entire week. A female cheetah with her 4 tiny cubs was lurking somewhere in the northern regions of the property, it just required the right timing and the sun to come out to dry the land enough for us to go in search of her. 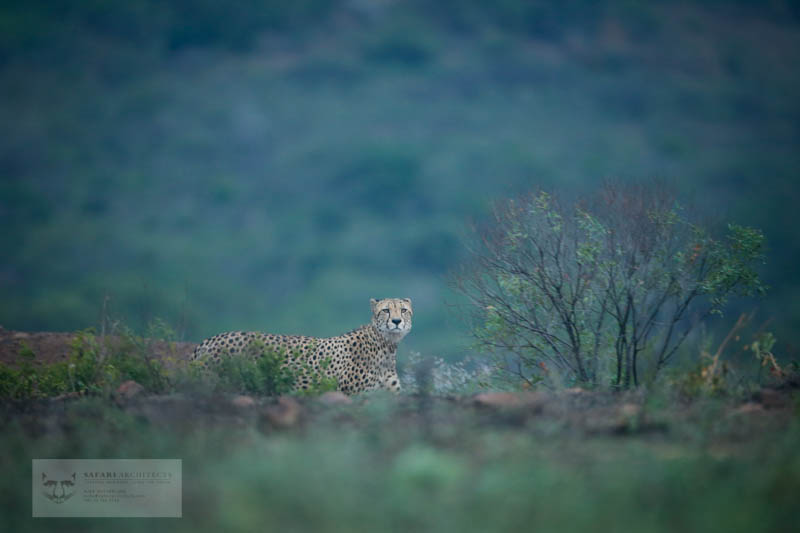 One of 2 cheetah brothers moves in the late afternoon, covering every inch of the land to make its presence known. 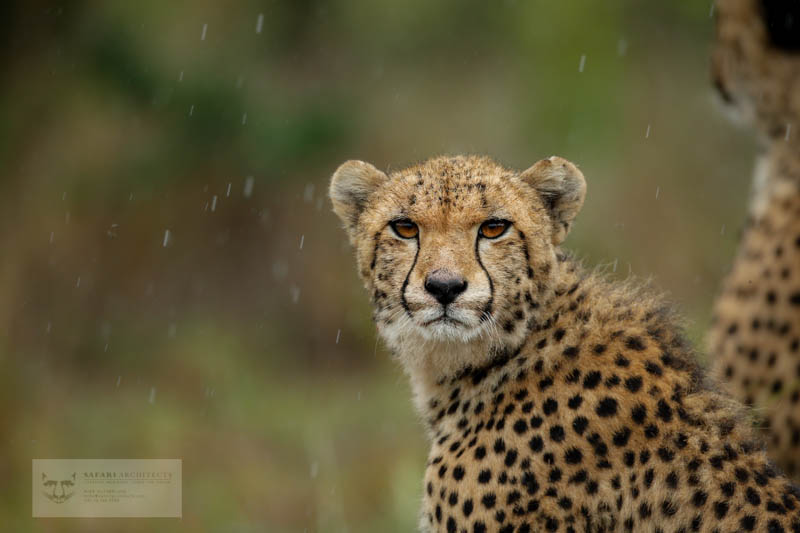 Hampered by the rainfall, this cheetah family took shelter from the weather.

With only a few drives left in our stay, the weather gods smiled on us and after a full day of scorching, northern Kwa-Zulu Natal heat, our opportunity was presented.

The consensus was to head out and search for the family until we found her. This meant leaving the lodge at 12pm and staying out until dark. But this was what we were here for, our ultimate goal, and every person on the vehicle was pumped and ready for what would turn out to be one of the best afternoons I have spent in the bush.

It took roughly 2 hours to travel northwards to the Mziki Marsh, where the family had last been seen days before and another 2 hours before that pivotal moment. “There she is!! There she is!!” was the cry from Matt, our ranger. Before we knew it, we were moving side by side with the mother of these 4 little cubs. Visibly lactating, we knew it was her and she was moving intently to a clump of bushes a few hundred metres east of our position.

As if by clockwork, she would move, stop, listen and move again. On a direct, pre-chosen path to those thickets. The atmosphere on the vehicle was growing with every step she took, and then it happened..

A gentle chirp, then a louder one. A contact call for the cubs. A few seconds of silence, another chirp, and as if it were pre-planned, there they were 4 little cheetah cubs, wrapped in their dark coats and silvery mohawks. The moment that we had envisioned this entire time was upon us.

There was nothing more rewarding than that moment for me. It was weeks of planning, anticipation and waiting. Some rain and some shine, and a lot of hard work. And as the old saying goes, “Good luck is where preparation meets opportunity.” The mother cheetah moved swiftly through the plains in search of her precious cubs. We could see her relief when she was reunited. 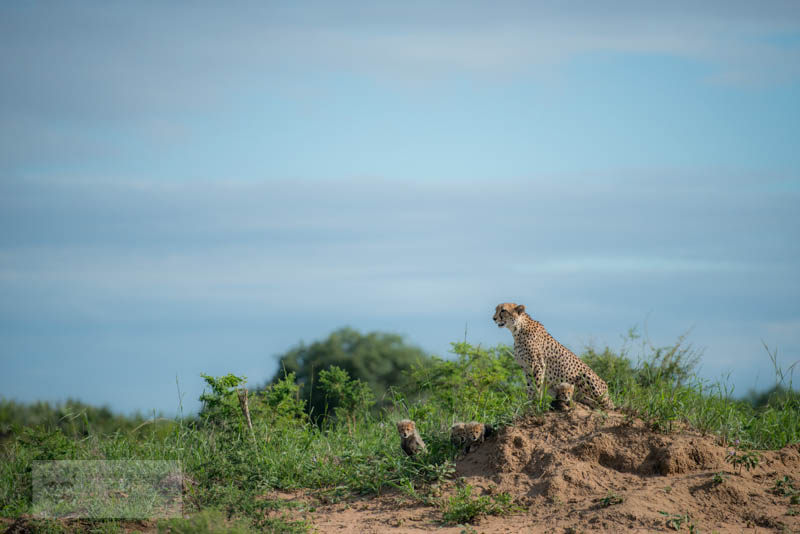 The cheetah family together. 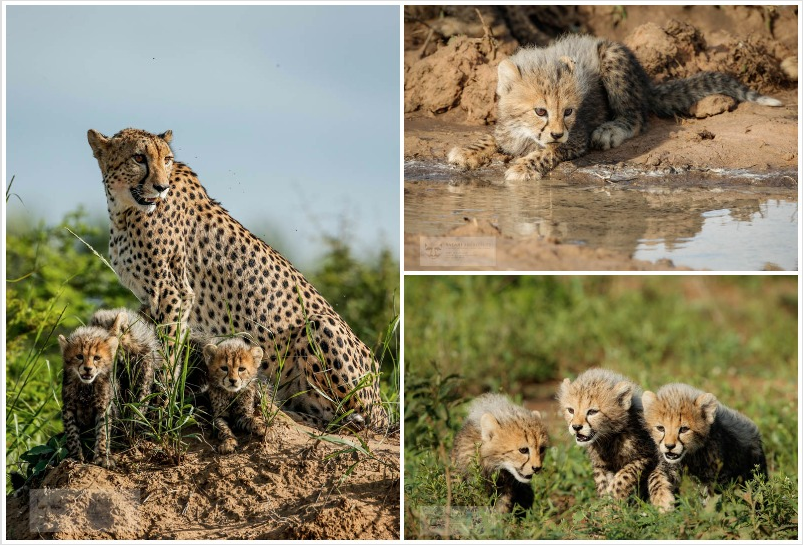 A collage of the cheetah family during the sighting. 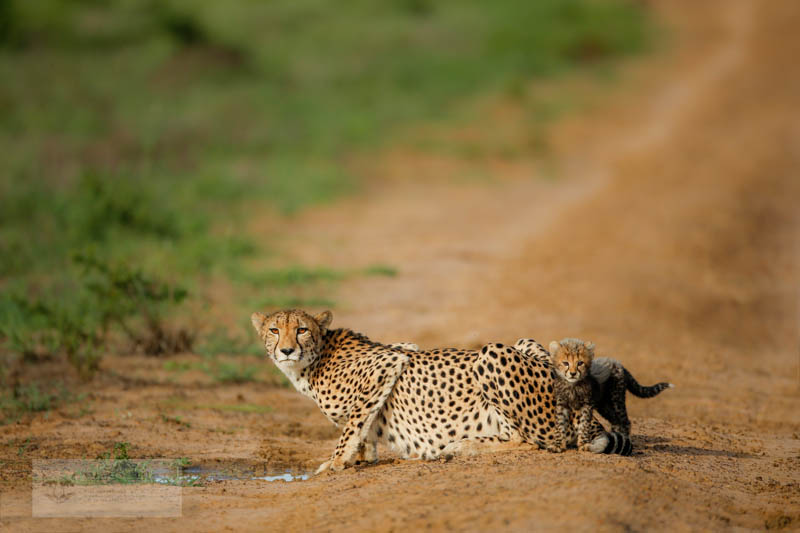 Pausing for a quick drink at a puddle in the road. The family regroups and then continues on their afternoon stroll.

Our story did not end there and the photographic opportunities continued to present themselves. Lions, leopards, black rhino and cheetah, and more cheetah. As the days passed, the cameras clicked, we cherished each moment out in this vast wilderness, knowing that around the next corner there could be another story waiting to unfold before us. The young lioness moved into the light while on a hunt with the older lionesses in her pride. 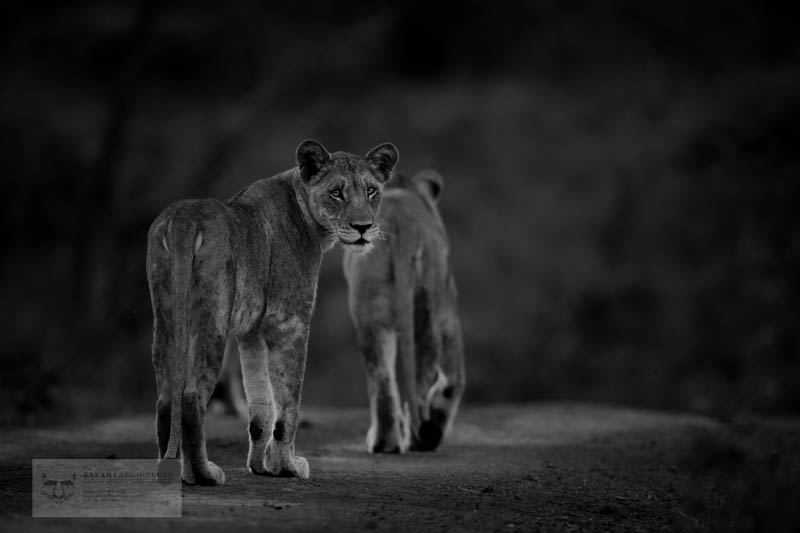 The young lioness briefly pauses and turns to listen for any sign of prey. The lionesses silhouetted against a setting sun. The alarm call of a kudu nearby caught the attention of this cheetah family. 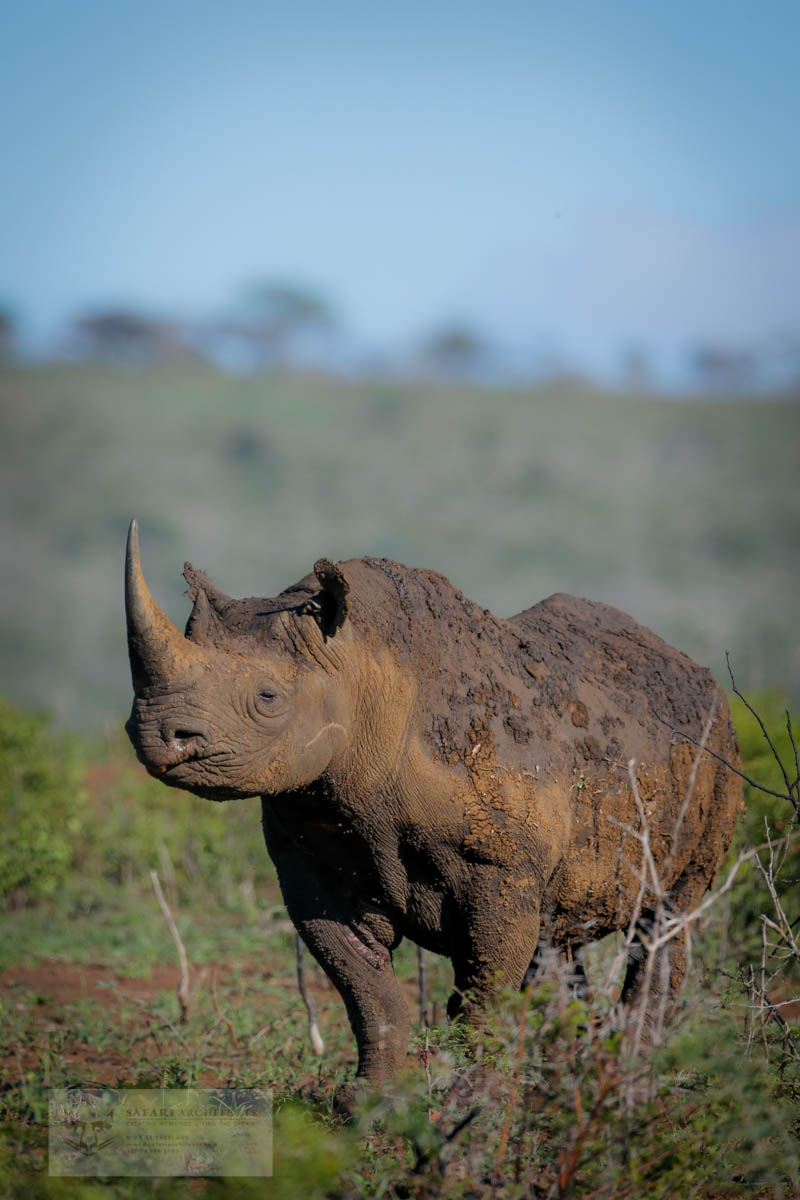 An incredible view of an extremely rare and vulnerable animal species. A black rhino moves over the crest and disappears into the wilderness. 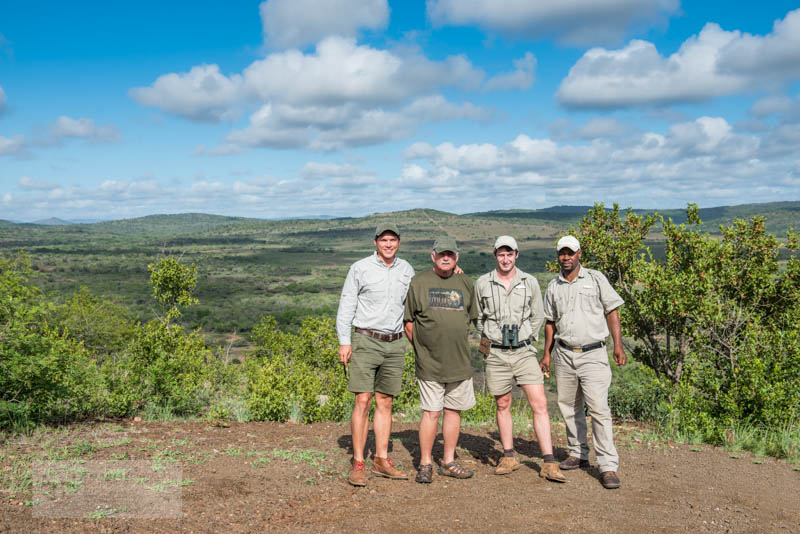 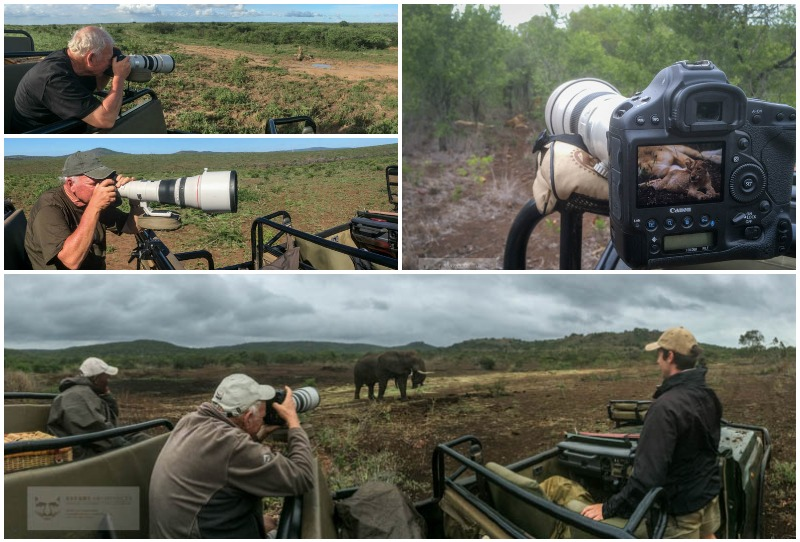 Some highlights of the rip.

I look forward to the next time I step foot on that beautiful piece of land, to go in search of these stories and to create memories with those we are fortunate to share them with.

Written and Photographed by: