The Lion Does Not Sleep Tonight

It was a sunny February afternoon in the Timbavati Game Reserve, the wind was skipping through the trees and the birds were chanting overhead. Myself and my guests were on a bush walk, enjoying the treasures of the wilderness on foot, when one of the guests mentioned to our guide that we hadn’t seen lions yet, a statement which prompted him to say: “Oh, I saw lions tracks this morning…”

Later into the afternoon, we headed out in the game vehicle to follow these tracks and find the lion pride! Our tracker John was an expert of the wilderness and took only minutes to find the tracks again, after which I jumped off the vehicle to join him in search on foot for a while. After some time, we came to the conclusion that the tracks were over half a day old, and that the lions must have moved off. We wondered where they could have gone and then suddenly remembered the huge herd of buffalo we had passed on our walk earlier! This was a promising start, as lions don’t often pass up a 400 option menu selection. 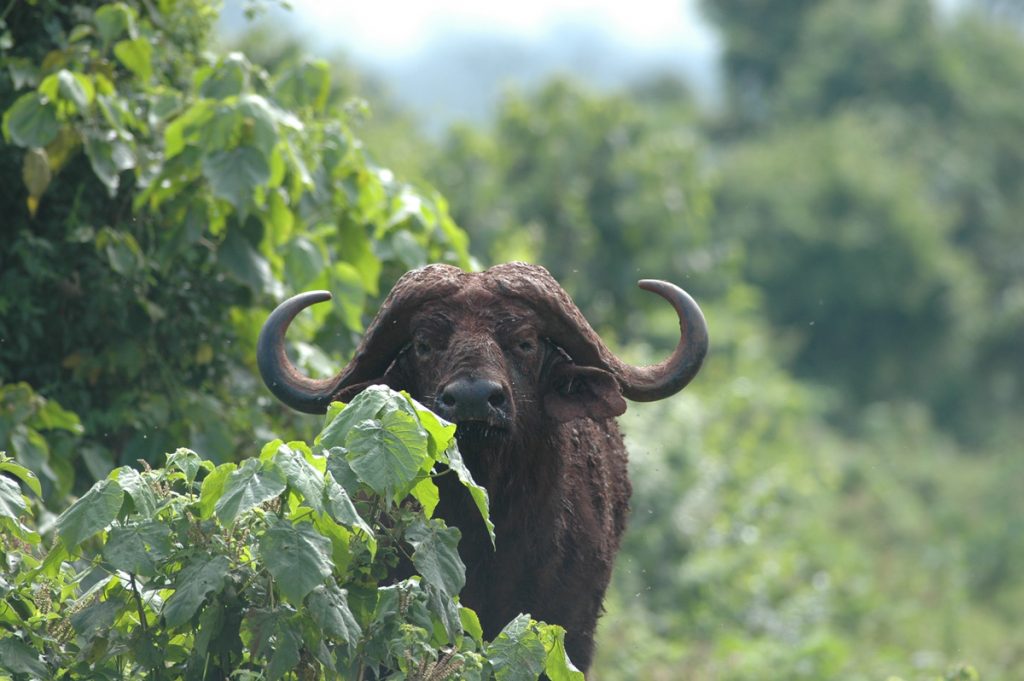 Imagine 400 of these intimidating animals standing together!

After finding the buffalo herd, but no lions, we were disappointed but decided to make the best of the beautiful sunset going on in the distance. We moved off to the side of the herd to relax, but still kept them in our view just in case… A while later, John and I suddenly looked up and then at each other: we heard some very soft alarm calling in the distance, impala for sure… and that was it! We dashed for the vehicle and drove off in pursuit, hot on the heels of whatever predator was causing the commotion. All of a sudden, we realized the radio wasn’t working, which was our best chance to contact our guides and see if someone had spotted the pride. We would have to resort to the old-fashioned way: tracking again! John was such an expert that finding the tracks was a breeze for him, and he was confident we were getting close…

As we came around a bend, we suddenly spotted them, a pride of lions lazing atop a termite hill, silently so as not to cause commotion or alert within the buffalo herd (the same herd we had now come back to on the other side of them) The lions were all interacting peacefully, rubbing heads and playing, making for some excellent photographic opportunity! They were all quiet and getting centred for what was to come, knowing it was about to be an extremely dangerous situation. After what felt like only a few seconds, a lioness abruptly stood up and led her pride straight into the herd. Slowly, she snaked in and out of vision, but eventually great chaos ensued. A young male jumped right in front of a buffalo bull, but quickly realized his mistake and fled again! As darkness grew in the sky, the illustration of the commotion became a lot more about audio than sight; with sounds of snorting, roaring and grunting rising up into the air. The hyper aware buffalos now took charge and attacked the lion pride in full force. The lions backed out and ran a distance away to reassess and reorganize their attack. We unfortunately couldn’t stay longer as it was getting too dark, but what an exhilarating few hours this was! 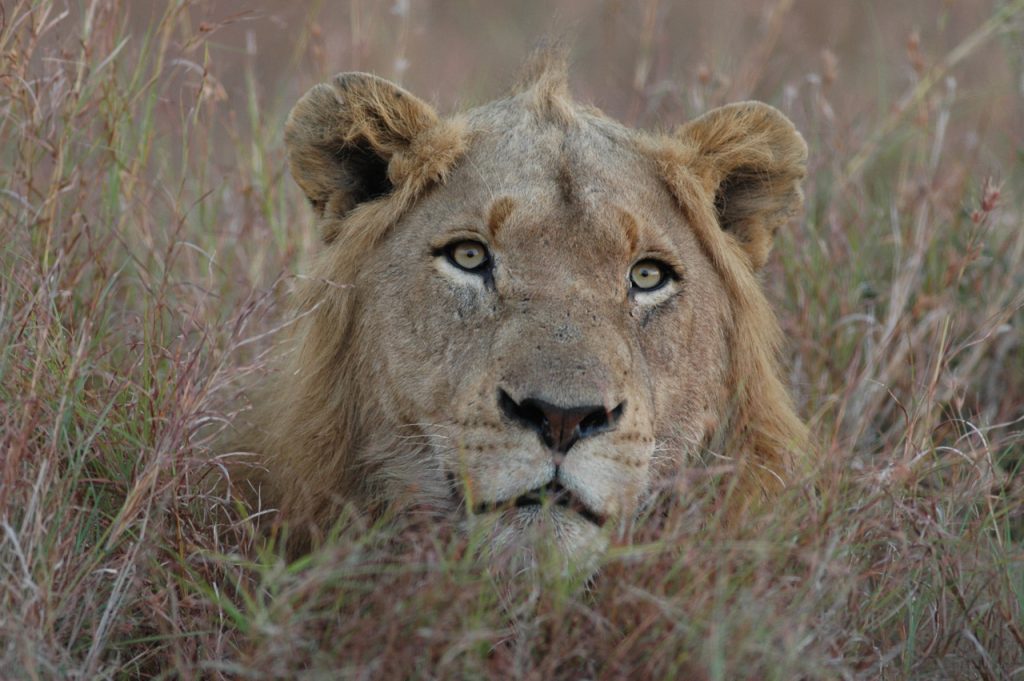 The eyes of a lion are sharp and alert.

As we left the scene to head back to camp, full of excitement and good spirit, the vehicle suddenly decided to add a little more anticipation to our evening by deciding to lose the ability to turn… We had to stop in the middle of the wilderness, in the pitch black darkness, to try and access and fix the situation. The sounds of the lions still hunting close by filled the air: one could say this was a truly nerve-wracking experience. We tried to mend the underside of the vehicle, where the issues were, but no luck. So what were our options? A. Radio for help – no signal. B. Call from a cell phone – again, no signal. C. Walk back to camp – probably an unwise idea given the hunting predators nearby. Our only option was to keep trying the phone, which after standing on the roof of the car for ages, finally gave us a single bar of signal! Enough to send a quick text message. The lion roars were slowly getting louder, but John and I kept this to ourselves while trying to kept the guests distracted. Just then, another roar was suddenly very audible, this time however it was from the sky. Thunder was rolling in, followed by bright lightening. As the signal was now worse due to the storm, we had no idea whether the office had received our message. Waiting in suspense in the darkness and the rain sounds like the start of a thriller novel… We tried again and again before eventually asking our tallest guest to stand on the roof, resulting in enough signal to message again! 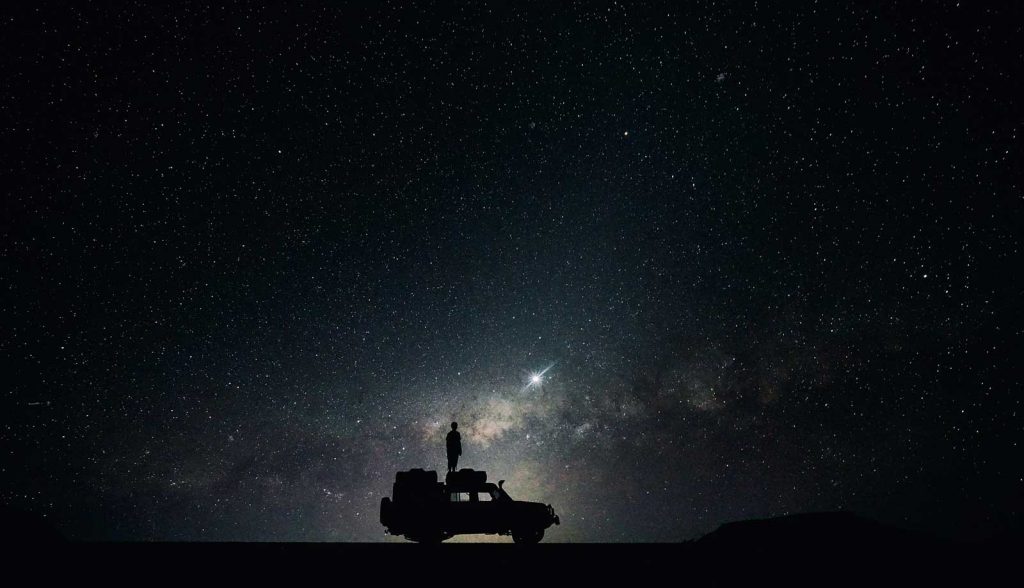 When in doubt, stand on top of your game vehicle!

As we waited, the next chapter of our story began: “Um, I think there might be a lion behind the car…” said one of the guests. I had no energy to be concerned at this point and just assumed it was a shadow or a rock, but to be safe we shone a torch and SURE ENOUGH there was a lion right there! And not just one lion,  but a whole pride in pursuit… They all came to lay down close to us, probably knowing we were already on edge and having a laugh internally. I guess now Plan C was seriously out of the question? Although there were mild nerves around the vehicle, we all just had a good laugh at the situation: only in Africa!

Finally, Sam in the rescue vehicle approached us, honking and flashing its lights, a truly confusing sight for the resting lions! The timing could also not have been better: the last guest’s foot touched the floor of the new vehicle as the first raindrop of the storm fell. However, this crazy evening was not done with us just yet… The rain was now so heavy that the game vehicle flooded the road, causing us to get stuck at the bottom of a hill. It was up to John, Sam and myself to jump out and push the land rover up the slope, and let’s just say, it was one of the more intense experiences of my life: lots of shouting, heaps of mud and a missing shoe!

We FINALLY we arrived back at camp after 10pm! Besides all the nerves, it was certainly one huge and exciting adventure! It brought everyone closer together and everyone’s smiles and laughter could not be contained, we had stories for a lifetime!

Of course, a night like this wouldn’t be complete without one final hurrah, and by that I mean a puff adder hiding under the dining room table behind where we were sitting… it was just beyond laughable at this point, no room left for fear! After removing the snake from the area, we all had one final head shake in disbelief, a few high fives and it was time for bed…

You wanted adventure on safari? You got it!