Africa Geographic photographer of the year 2015

We are thrilled to share the news that co-owner and guide, Chris Renshaw has been awarded the prestigious title of “Africa Geographic wildlife photographer of the year for 2015”. This is a fantastic achievement and we congratulate him on this accomplishment. His image below was chosen from 9,736 photographs that were submitted, with over 6,5 million page views, and over 109,270 votes cast by the Africa Geographic community. Judge Heinrich van den Berg had this to say, “This is a once in a lifetime image. The story element of the image is brilliant. The fact that the viewer can only see the paw of the leopard but the face of the monkey emphasises the unfortunate situation in which the monkey finds itself, and makes the faceless predator seem evil. The image is beautifully framed and executed, but more importantly, it’s got heart. The balance of the moment tipped in favour of one creature and the peril of the other, the mirrored positioning of the two creatures and the expression on the monkey’s face add up to a scene which you will likely never see again”

The image and full story is below. 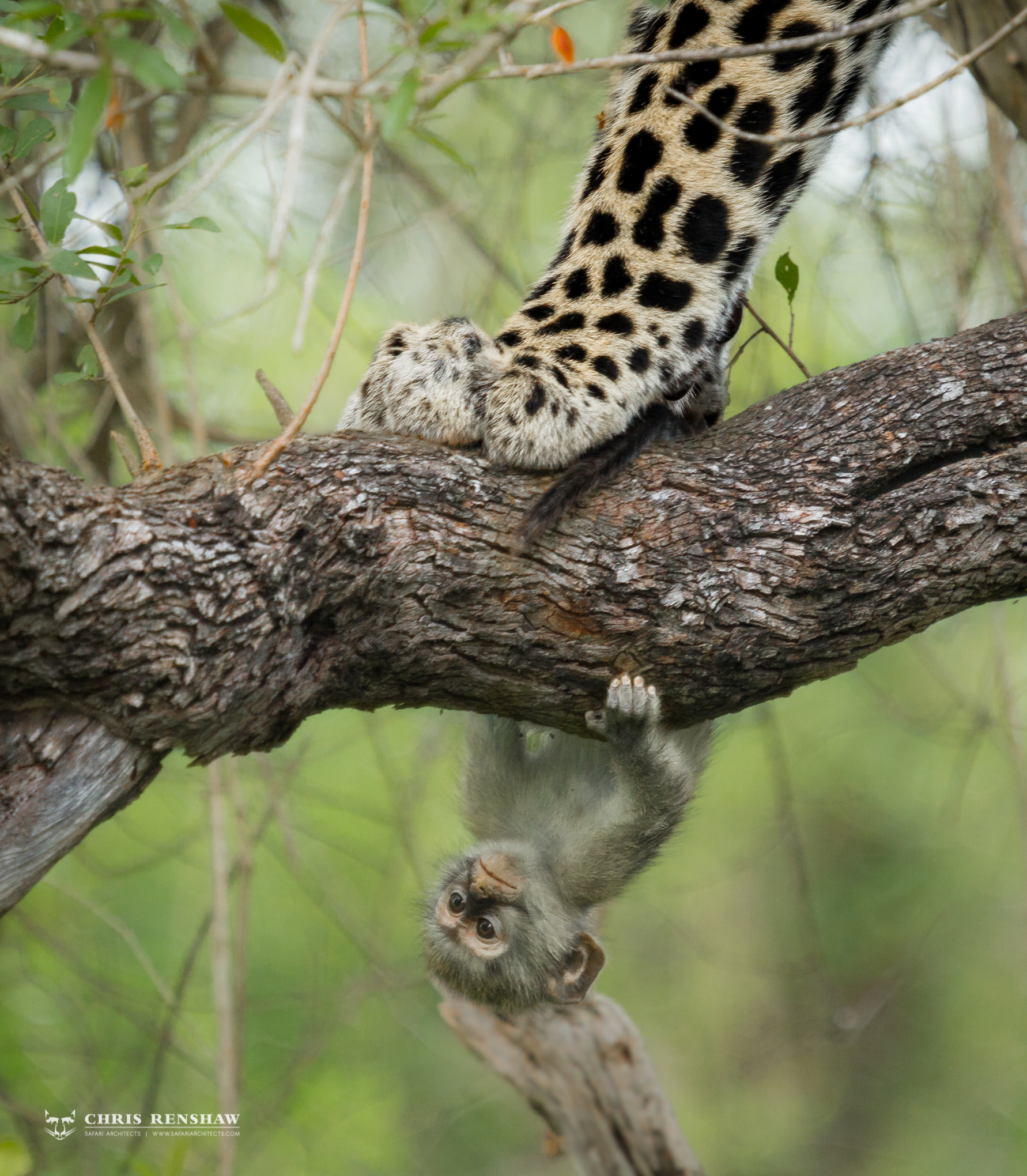 The sound of Ververt monkeys alarm calling always sparks a rush of adrenalin in any guide. Something is happening. A predator of sorts has been sighted and the manic calls send a rippling wave of warning through the troop ranks. A leopard! A fellow guide had heard the same alarm calls and got there just as the Ravenscourt young male leopard was catching his very first Ververt monkey. It was a very young monkey, an infant and could not have been more than a few weeks old. He caught it with what every cat has. Instinct, speed, agility and the ability to seize an opportunity. The mother Ververt had momentarily left the ground to investigate some fruit not 5 metres away, when the leopard charged in. He did not kill it, but proceeded to play with his quarry. Tossing it up and down, pawing, licking and jabbing it, climbing trees and dropping it, only to pounce on the shell-shocked monkey repeatedly. It was heart wrenching to watch, but we all knew that this was nature at its most raw, and sat transfixed. With the cries of the mother and the rest of the troop nearby, the infant held on to life and fought for freedom valiantly. This is when the photographic opportunity of a lifetime presented itself. The young male leopard trapped the monkey on the branch, it looked up at its mother, and the look on its face described the heartache and desperation it was experiencing. The definition of life and death.

A sharp growl from the mother leopard indicated that something else was to add to the dynamic. From behind our vehicle an adult hyena suddenly appeared. The cub (monkey in tow) and mother dashed up a tree with the Hyena skulking in for any signs of scraps. Growling continued until the Hyena realised that there was no meal to be had, and it casually lay down 10 metres away below the tree.

This prompted the young male leopard to begin to play with his quarry once again, as mother watched on impatiently. All of a sudden the cub dropped the still alive infant. Chaos erupted! Monkeys chattered, the Hyena bolted in, the cub lost his nerve, but the calm and elegant mother leopard simply dropped down, and in one motion retrieved the monkey and climbed to a higher part of the tree. She showed her disdain for her cubs mistake and the hyenas presence by quickly putting the infant to death. Simple, quick and lethal. With soft bones and young fur, she ate the infant whole. The cub was left a spectator, brooding on his mistake and learning a harsh lesson. The alarm calls of the Mother ververts slowly subsided, and she slowly moved off, accepting the harsh reality of life and death.

A once in a lifetime sighting that my guests and I will never forget! The harshness and reality of what we had just witnessed settled in and we drove back to the camp individually contemplating the raw power of life and death in the African bush.